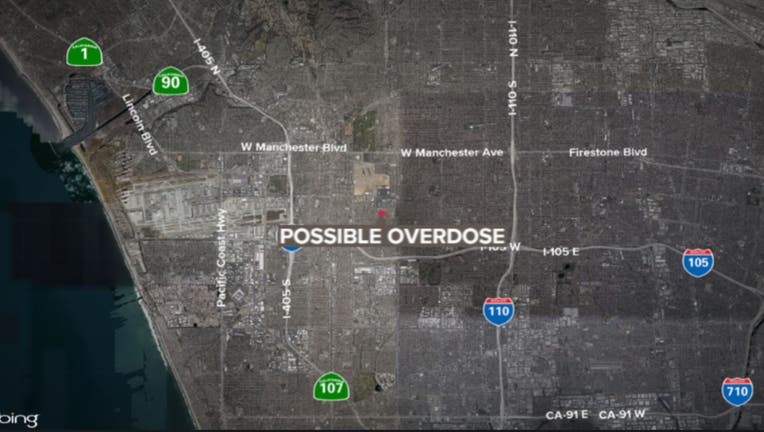 A minor was rushed to the hospital after a possible overdose in Inglewood. (FOX 11)

INGLEWOOD, Calif. - A minor is released from the hospital after earlier reports suggested they may have suffered an overdose in Inglewood.

The Los Angeles County Fire Department responded to a call from Morningside High School around 2:15 p.m. Friday. Officials did not say if the person being rushed to the hospital was a student or if they had any affiliation with the school.

Officials also did not specify the exact age of the minor involved in Friday's health scare. After the LA County Fire Department said the person may have, not definitively, suffered a possible overdose, the Inglewood School District came forward and denied rumors that it was a "potential student overdose."

The school district added it was a "non-life threatening emergency" and the person was coherent when they were dealing with the paramedics on-site.

While fentanyl likely had nothing to with Friday's health scare, schools across Southern California had been on-alert as the fentanyl crisis has hit the country. The Morningside High School health scare comes exactly a week after a Bernstein High School student was rushed to the hospital after an overdose scare.

"We talk to our kids. We tell our kids about the dangers of all types of things in life. We can't watch our kids when they go to school," the father of the surviving 15-year-old girl told FOX 11 back in September.

The two girls' apparent exposure to fentanyl left Ramos' family demanding answers from the school at the time of the 15-year-old's death.

"Anger is probably my top [emotion] right now. I'm angry that in my heart I feel the school failed. The reason why is because they didn't even notice that Melanie was missing. They didn't find out until later so that tells you they don't check on our children. They don't do sweeps," said Gladys Manriques, a family member of Ramos, told FOX 11 in September 2022.