A 15-year-old girl from Bernstein High School has died after what police believe was fentanyl poisoning. Now, her family is hoping to spread awareness so other families won't go through what they are going through.

The parents of two teen girls became concerned after their daughters did not return home from school and reported them missing Tuesday evening. The stepfather of one of the girls began driving around in search of his stepdaughter and kept circling back to her school.

Around 8 p.m., he found her collapsed in the courtyard of the school campus located near the intersection of North Wilton Place and Fountain Avenue. In a fragile state, she managed to tell her stepfather she took half a pill she bought at Lexington Park.

Ramos was later found that evening inside the school's bathroom.

"Anger is probably my top [emotion] right now. I'm angry that in my heart I feel the school failed. The reason why is because they didn't even notice that Melanie was missing. They didn't find out until later so that tells you they don't check on our children. They don't do sweeps," said Gladys Manriques, a family member of Ramos.

Quintero said Ramos was a loving kid who always checked in, and had dreams.

"She loved her siblings. She loved her mom. She wanted to go to the army. She loved traveling, and she just came back from Mexico visiting her family. We're gonna miss her. Her mom is going to miss her," said Quintero. 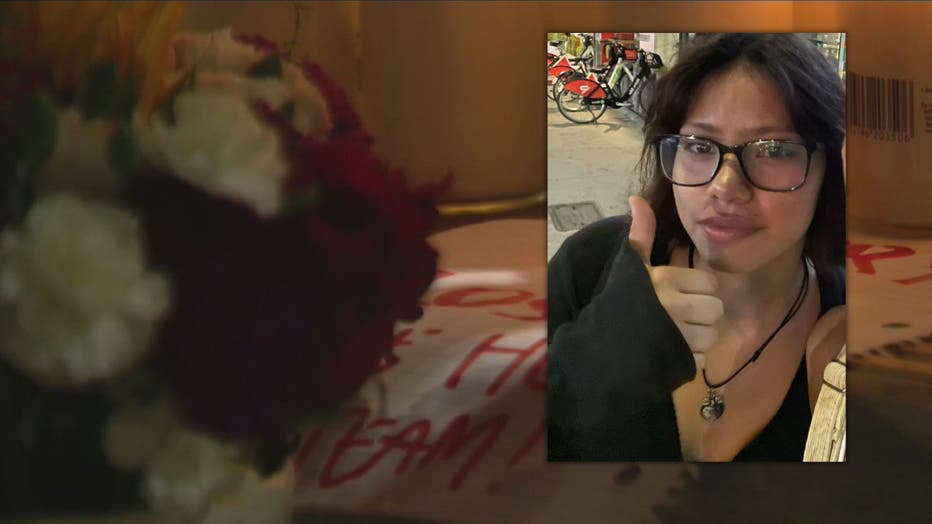 The family wants to raise awareness about the dangers of fentanyl and drug consumption. They are hoping parents will speak to their children and educate them following Ramos' death.

"Every parent is busy. Just take five to ten minutes out of your time, and ask your child if anyone is pressuring them. Pay attention to who they're hanging around. That's the biggest thing. Who influences [them] and who they hang around will impact your child. Teach them what this drug can do because this is not just a drug. This is poison. Think of our Melanie. Think of our Melanie every time you think you're gonna do something. Think about her because causing pain to your family is not OK," said Manriques.

The Los Angeles Police Department said Thursday two juveniles, ages 15 and 16, have been arrested in connection with the recent overdose/poisoning cases of high school students in the Hollywood area, including Ramos' death.

In a press conference held Thursday afternoon, LAPD Chief Michel Moore said the students purchased what they believed was Percocet at either Lexington Park or on the Bernstein High School campus. However, the drugs were laced with fentanyl.

Moore noted they have records of overdoses among teens dating back to Aug. 26. The fall semester began for LAUSD students on Aug. 15.

Moore added that the incidents should not be classified as "overdoses" and instead the students had been "poisoned."

The family is hoping for justice following Ramos' passing.

"I think there's a line to blame and we want justice for Melanie. We want her to be remembered as happy and I think she would want justice as well," said Manriques.

The family has launched a GoFundMe page to raise money for funeral expenses and to bury Ramos in Mexico. Those looking to help can click here for more information.

"You never think this is gonna happen to you so if everybody can take out their time [we would appreciate it]. You can donate a dollar. It doesn't have to be $150, or $20, it can be a dollar or a share, a simple share," said Manriques.