LOS ANGELES - From the halls of Congress to local classrooms across California, it’s been another combative week in American politics.

THE ISSUE: THE IMPEACHMENT TRIAL OF FORMER PRESIDENT TRUMP

BACKGROUND: This week, the Senate convened for the second impeachment trial of former President Donald Trump. After voting 56-44 that the trial itself was in fact Constitutional, Senators then heard arguments from House managers and the Trump defense team regarding whether the President was guilty of "incitement of insurrection."  A final Senate vote is expected as early as this Saturday, February 13, although the former President is unlikely to be convicted.

PADILLA’S CENTRAL TAKE: "Nobody is above the law, and when you break the law, there must be consequences, you must be held accountable… Seeing the evidence laid out by the House managers, to see the sequence of events, not just of January 6, and connecting the dots directly between Trump’s inciteful rhetoric and the violence and fatalities that happened that day, but you can go back months, you can go back years, this was all fueled by conspiracy theories about election fraud that had no proof of evidence, that’s what we refer to as ‘the Big Lie’… As far as his defense goes, boy, they were in a tough spot, because Trump’s actions are clearly indefensible. They’ve done a horrible job. I’m more convinced than ever that we need to convict…"

BACKGROUND: This week, The House Ways and Means Committee approved $1,400 stimulus checks for most Americans. Meanwhile, The Education and Labor Committee voted to increase the minimum wage to $15/hr. These actions, in addition to votes taken by the Transportation Committee, Financial Services Committee, and others, are part of House Democrat’s effort to use budget reconciliation to pass the President Joe Biden’s $1.9 Trillion COVID-19 relief package without the need for Republican support.

PADILLA’S CENTRAL TAKE: "The very reason we went through the process last week, to set up our ability to move sooner rather than later on a significant COVID relief package, was to be able to do it with 51 votes instead of 60… In an ideal world we’d love for this to be bipartisan, but we’re going to do it with, or without, Republicans, because Americans need help now. Families that are struggling need help now. Small businesses that are trying to keep the doors open need help now. State and local governments providing critical services need help now. It’s up to Republicans to decide to join us in this and make this bipartisan or to continue to hold out." 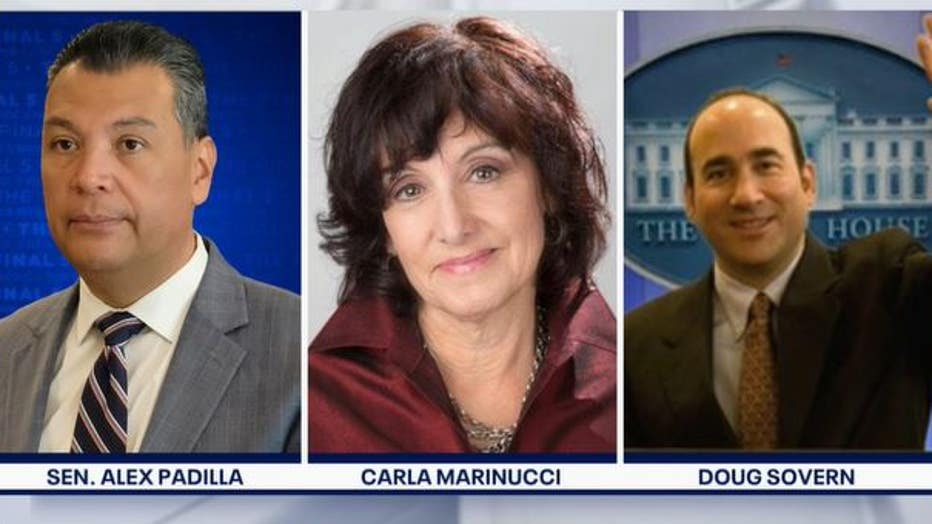 THE ISSUE: THE THREAT OF A RECALL ELECTION

BACKGROUND: On Friday, while the signatures have yet to be certified, organizers behind the effort to recall Governor Gavin Newsom announced they had collected the 1.5 million signatures needed to qualify the recall for a statewide vote. With the threat of a recall election looming, his approval rating falling, and additional Republican opponents jumping into the race, this week also saw a change of strategy from the Newsom team, one looking to avoid a repeat of the 2003 recall, which saw then-Governor Gray Davis replaced by Arnold Schwarzenegger.

MARINUCCI’S CENTRAL TAKE: "It’s becoming clearer every day that Californians better brace themselves for what’s going to be a crazy political year… Conservative media has been all over this, pushing this recall, Gavin Newsom has a target on his back, there’s no question about it. Part of it is the pandemic, the anger over the pandemic, businesses are angry, moms and dads are angry over schools, and the vaccine rollout has been slow in California, all of this has helped fuel it…  Newsom’s approval ratings, as you mentioned, have plummeted, so yes, this is real, and we could know within six weeks whether this qualifies and is a real election that goes before voters this year…"

SOVERN’S CENTRAL TAKE: "Gavin Newsom has been pursuing sort of a Rose Garden strategy for many months, where maybe he has one press conference a week and it’s remote, it’s virtual, there’s nobody in the room with him. This week, he had an event almost every day… He realized he’s got to be more accessible, he’s got to answer questions, he’s got to be more forceful. So he’s out there now in a way he wasn’t before, and while technically he’s governing, not campaigning, there is no doubt, he is campaigning, they see the writing on the wall, the recall is almost certainly going to qualify now, and he’s got to get out there and fight it…"

BACKGROUND: Friday, California released a new interactive Safe Schools Reopening Map, which shows that while some elementary schools have returned to in-person learning, most middle and high schools across the state are still employing hybrid or, more likely, distance learning models, nearly a full year since schools originally closed.

SOVERN’S CENTRAL TAKE: "I’m a parent of two young kids in the Oakland schools, I wish they were back in person. The larger issue, of course, is the Teachers’ Union versus parents, not to make it monolithic, but most parents do want their kids back, and the districts would like to go back, but the Teachers’ Unions are just not willing to do it until they’re sure it’s safe, and without getting vaccinated they’re just not ready to go back… there’s only so much the Governor can do, because, of course, this is an issue that’s really controlled locally, by the districts, by the unions, the individual cities and districts, and it’s just a stalemate at the moment… We may be talking about the fall before most kids are back in school…"

MARINUCCI’S CENTRAL TAKE: "We’re seeing the reopenings happening in big cities like New York and Chicago, the plans are there to send the kids back to school, but there’s no clear timelines yet in Los Angeles, San Diego, San Francisco, and this is a problem… California is labor strong, there’s hundreds of unions on the table, that is toughest test of all for Gavin Newsom. As you said, the CDC has said vaccination of teachers is not a prerequisite to reopening, that there isn’t a lot of evidence of transmission now among students, it’s very very rare. So, at this point, yes, Newsom is between a rock and a hard place between these powerful Teachers’ Unions and parents who are begging him to reopen the schools, and this could be where his political future lies when it comes to that recall…"