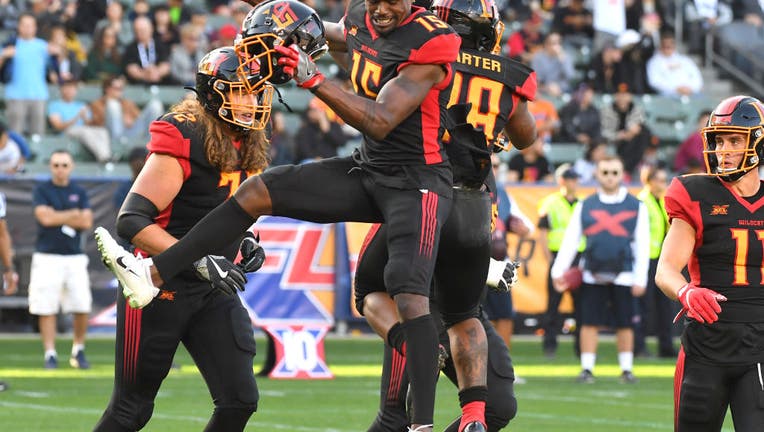 CARSON, CA - FEBRUARY 23: Wide receiver Tre McBride #15 celebrates with running back Martez Carter #28 of the LA Wildcats after a touchdown in the first half of the XFL game against the DC Defenders at Dignity Health Sports Park on February 23, 2020

CARSON, Calif. - After not reaching the end zone for five consecutive quarters and having a defense repeatedly unable to stop its opponents in their first two games, the Los Angeles Wildcats had a dominant performance on offense and defense on Sunday for their first victory.

The Wildcats scored touchdowns on three consecutive possessions in the second quarter and limited the DC Defenders to three points over the first three quarters in a 39-9 victory at Dignity Health Sports Park.

The fortunes of both reversed Sunday. The Wildcats intercepted four of Jones' passes and he was replaced by Tyree Jackson on the Defenders' first possession of the fourth quarter after completing 13 of 26 passes for 103 yards and being sacked three times.

"We did a really good job of mixing things up," Wildcats coach Winston Moss said. "We made sure that we just tried to hold or disguise and mix our coverages up and do different things and force him into second-guessing what he was doing and that ended up working well for us."

The game marked a return to Dignity Health Sports Park for Jones, who played six preseason games there for the Los Angeles Chargers from 2017-19.

Leading 6-0 thanks to Josh Johnson's 40-yard touchdown pass to Tre McBride on the game's first possession, the Wildcats increased their lead to 27-0 with four minutes, 44 seconds left in the first half.

Larry Rose ran 1 yard for a touchdown with 14:20 remaining in the second quarter, five plays after cornerback Mike Stevens intercepted a pass by Cardale, Jones, at the Defenders' 28-yard line. Martez Carter caught a pass from Johnson for a 2-point conversion.

Johnson threw a 28-yard pass to McBride with 8:40 to play in the first half to complete a seven-play, 42-yard drive that followed KermitWhitfield's 41-yard punt return.

The Wildcats (1-2) capitalized on Hunter Niswander's botched punt attempt for their next touchdown. With Jack Tocho rushing in, Niswander did not attempt to punt. The ball became free with Tocho recovering it at DC's 10-yard line, then returning it 6 yards.

Carter ran 1 yard for a touchdown two plays later. Rose ran for a 1-point conversion.   Carter also scored the Wildcats' final two touchdowns on an 18-yard pass from Johnson in the third quarter and on a 20-yard run with 11:39 to play.

"We executed today," said Carter, who rushed for a team-high 34yards on 11 carries and caught three passes for 41 yards.

"Coach preached that if we executed, we will have a great game and we will beat these guys. They were coming in on their high horse and they kind of got knocked down today, so they gotta go home and re-evaluate."

The Defenders allowed a league-low 9.5 points per game entering Sunday's game. They recorded the league's first shutout Feb. 15 in a 27-0 victory over the New York Guardians.

Johnson completed 18 of 25 passes for 278 yards and three touchdowns before a crowd announced at 12,211.

The Wildcats announced a crowd of 14,979 at the 27,000-seat stadium for their home opener last Sunday against the Dallas Renegades.

McBride caught five passes for 109 yards, both game-highs, after missing the Wildcats first two games because of a thigh injury suffered in training camp.

"We've been waiting for that guy to show up since we made that trade for him," said Moss, who is also the Wildcats general manager. "He's been fighting and had a setback ... more than a few weeks ago. To get McBride back was a big key today."

The Wildcats obtained McBride in a Jan. 12 trade with the Defenders for receiver Rashad Ross, who was second in the XFL in receiving yards entering Saturday's play but was held to one catch for 17 yards Sunday.

McBride was chosen by the Tennessee Titans in the seventh round of the2015 NFL draft out of William & Mary. He played nine games with the Titans over two seasons, making two catches for eight yards and a touchdown, before being waived before the start of the 2017 season. McBride played eight games for the Chicago Bears in 2017, starting three, making eight catches for 144 yards.