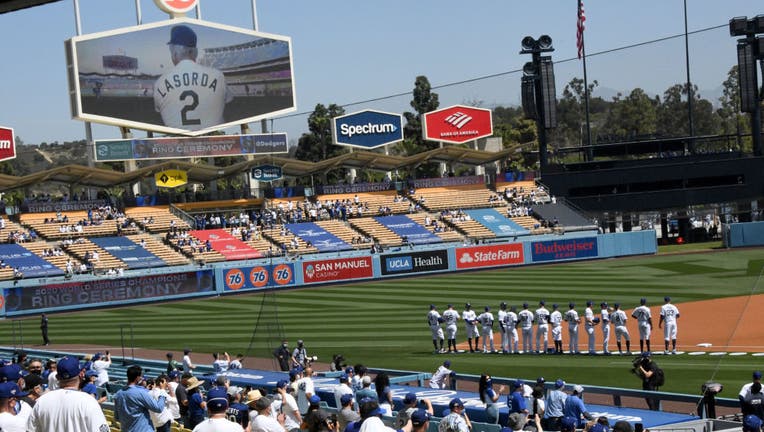 An approximately 4 1/2-minute video of clips of Lasorda interspersed with recollections of him from Dodger manager Dave Roberts and players was shown on the stadium's video board.

The tribute concluded with a video of Lasorda singing "My Way," the 1969 song popularized by his friend Frank Sinatra.

Lasorda's daughter Laura made the announcement that precedes every Dodger game at Dodger Stadium, "It's time for Dodger baseball."

In the video, pitching star Clayton Kershaw said "one of the great things about Tommy was that he always remembered names." Kershaw recalled meeting Lasorda for the first time in 2006. Kershaw had come to Dodger Stadium to sign his first contract with the Dodgers, two weeks after they chose him with the seventh pick in the 2006 MLB draft, and was accompanied by his mother, Marianne, who introduced herself to Lasorda.

"From that day on, I don't think Tommy ever saw my mom again but he always asked about her by her first name," Kershaw said. "I thought it was really cool that he met her one time and remembered my mom's name. I thought that was pretty special."

The Dodgers will have a memorial patch on the right sleeve of their jerseys with Lasorda's name and No. 2 on it throughout the season. It is above a memorial patch for Hall of Fame pitcher Don Sutton, who died Jan. 18 at the age of 75.

Many items from Lasorda's office will be available for public viewing throughout the season in various memorabilia displays in the Right Field Pavilion.

Lasorda managed the Dodgers from the tail end of the 1976 season to midway through the 1996 season, guiding them to seven National League West Division championships, four National League pennants and World Series titles in 1981 and 1988. He was elected to the Baseball Hall of Fame in 1997.