LOS ANGELES (AP) - Defense has been in short supply the last three times Southern California and UCLA have met in the Crosstown Showdown, and it’s expected to be the case again Saturday during a much-anticipated matchup between the Los Angeles schools.

The seventh-ranked Trojans and No. 16 Bruins have two of the top three offenses in the Pac-12. They have combined for 81.9 points and 1,003.5 combined yards per game this season.

Further raising the prospects of an offensive shootout is that USC and UCLA have combined for at least 81 points in the last three matchups.

USC getting ready to rally before showdown against UCLA

"I would be shocked if this wasn’t one of the more higher-scoring games that we’ve seen in college football this year," said Fox Sports analyst Joel Klatt, who will call Saturday’s game. 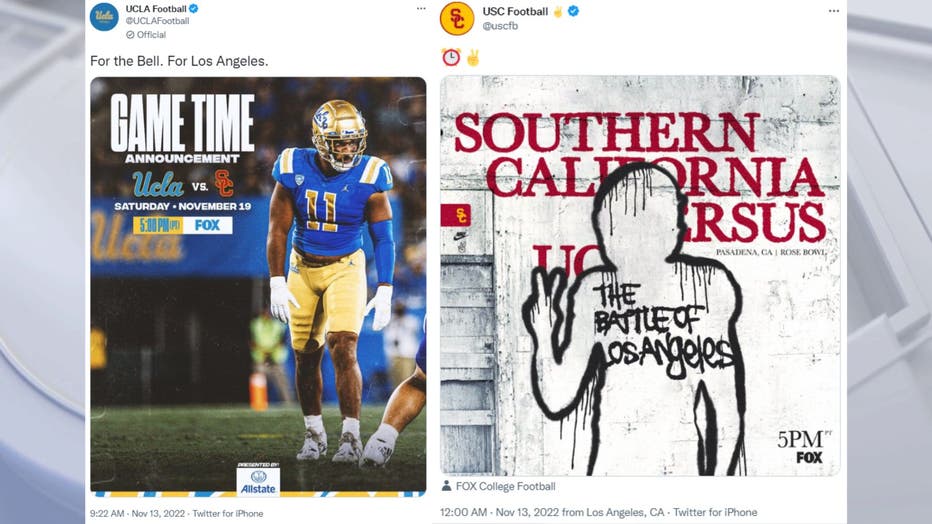 USC will visit UCLA in the annual rivalry showdown Saturday.

USC (9-1, 7-1 Pac-12) can advance to the Dec. 2 conference title game with a victory and would also enhance its chances of advancing to the College Football Playoff. UCLA (8-2, 5-2) would be eliminated with a loss.

The teams have different styles on offense. USC’s Caleb Williams is tied for third nationally with 31 touchdown passes and 12th at 301 passing yards per game. Jordan Addison is tied for second in the conference with seven TD receptions despite missing two games.

The Trojans’ passing game could be under more strain this week after running back Travis Dye suffered a season-ending ankle injury in last week’s win over Colorado.

Williams this week declined to get in a battle of words with UCLA quarterback Dorian Thompson-Robinson, who said that "we hate those guys across town."

Williams said on Wednesday, "I haven’t been focused on them, other than their defense. When you start trying to ramp up things that you normally haven’t done, bad things start to happen."

UCLA has one of the nation’s top rushing attacks, averaging 240.1 yards per game. Zach Charbonnet leads the conference with 1,145 yards and has six straight 100-yard games.

The Bruins are 21-5 in Chip Kelly’s five seasons when they rush for at least 200 yards.

"UCLA has as good a run game as most in college football. They are going to be able to lean on their big, physical backs," Klatt said.

Austin Jones is expected to be the first option to take over for Dye, who accounted for nearly half of USC’s rushing yards and 43% of its carries.

Jones, a Stanford transfer, had 74 yards last week against Colorado after Dye’s injury. In two career games against the Bruins, he has rushed for 108 yards and scored two touchdowns.

"Travis is a tremendous player, and we’re all hurt he won’t be there, but he’ll be there emotionally, and he’s still a big part of this team," center Brett Neilon said. "We’ve got Raleek, Darwin, Austin. They’re going to do a great job. Obviously a lot of talent there. We’ll keep pounding."

The Crosstown Showdown is new to much of USC’s coaching staff and to a roster that was built extensively through the transfer portal. But the ferocity of the rivalry game has been immediately obvious to the Trojans, who have seen banners and posters across campus all week exhorting them to win, particularly for revenge after last season’s disaster.

"It’s definitely something I’ve been thinking about, coming to a new town," said Addison, the Biletnikoff Award-winner who transferred to USC from Pitt. "I know it’s a big game for this city, and people have been talking about it, so I’m starting to get the feeling."

Even with last week’s loss to Arizona, UCLA still has a narrow path to get to the Pac-12 championship game for the first time since 2012.

The Bruins would first need to beat the Trojans and win at California next week to have any chance.

USC yielded 115 points in the three games before last week’s visit from woeful Colorado, so the Trojans’ defensive deficiencies clearly are their greatest concern and UCLA’s biggest opportunity. With FBS sacks leader Tuli Tuipulotu leading the way, the Trojans’ main goal will be to contain Thompson-Robinson as well as Arizona did last week.

"DTR, you can see he’s real comfortable back there, so we’ve got to put some pressure on him," said USC cornerback Calen Bullock. "That’s got to be one of our main goals as a defense."

KEEP AN EYE ON

UCLA edge rusher Laiatu Latu, who is second in the Pac-12 with eight sacks and has two games with multiple sacks. He is also sixth in the conference with 9 1/2 tackles for loss.