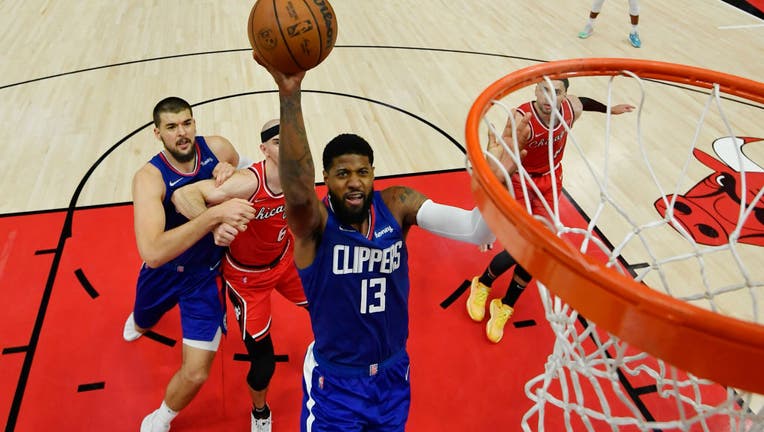 CHICAGO, ILLINOIS - MARCH 31: Paul George #13 of the Los Angeles Clippers shoots in the second half against the Chicago Bulls at United Center on March 31, 2022 in Chicago, Illinois. (Photo by Quinn Harris/Getty Images)

LOS ANGELES - The NBA playoffs are set to begin on Easter weekend, but first, four teams in each conference will battle for a spot to make it to the playoffs in the league’s newly formatted play-in tournament.

While the Los Angeles Lakers were eliminated from playoff contention earlier this week, LA’s other team, the Clippers, have been resilient and continue to exceed expectations.

For Clipper Nation, the last two seasons have come with historic highlights and disappointing lows, filled with some "what ifs?" What if Ty Lue was the head coach in the NBA Bubble in 2020? Would Lue have helped prevent a meltdown in the semifinals against Denver, despite a 3-1 lead? What if Kawhi Leonard didn’t get hurt during last year’s playoffs against Utah?

Even without Leonard, the Clippers challenged the Phoenix Suns to six games in the Western Conference Finals last season. As fans may recall, this was the first team to reach the Western Conference Finals in the franchise’s history. To some, it may be a laughable accomplishment since the Clippers have yet to win any titles, but it’s a step in the right direction for the franchise.

This season, some counted out the Clippers entirely after superstar Paul George missed three months after suffering an injury to his right elbow during Christmas week. And still, it remains unknown when Leonard, a two-time NBA Finals MVP, will return.

No Paul George? No Kawhi Leonard? For Ty Lue, it was simply no problem as he was able to pull out the best from the team’s role players. The front office took care of business at the trade deadline, acquiring Norman Powell and Robert Covington from Portland. After many hard-fought battles on the hardwood, the Clippers managed to hold onto the 8-seed, with George and Powell back in action.

Now, the Clippers must win a game in the play-in tournament to keep their playoff hopes alive.

On Tuesday night, the Clippers will take on Patrick Beverley, Karl Anthony Towns, and the Minnesota Timberwolves in an away game.

The teams have faced each other four times in the regular season, in which the Clippers are 3-1.

The Clippers face the Timberwolves in Round One of the play-in tournament on Tuesday, April 12. Tip-off is scheduled at 6:30 PT and will be televised on TNT.