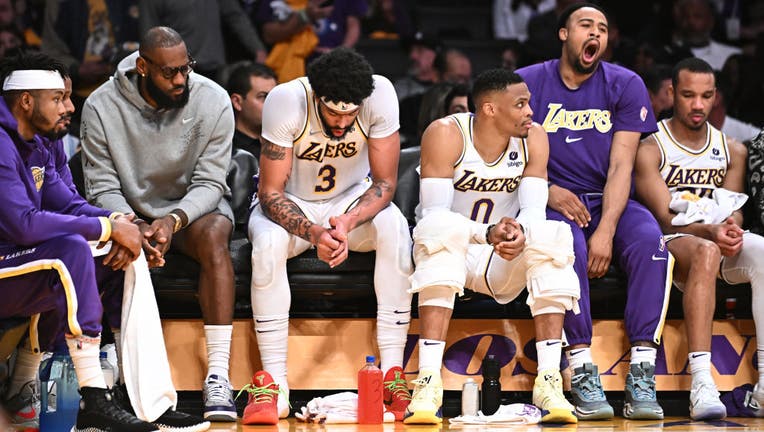 LOS ANGELES - The Los Angeles Lakers failed to pull out a win on the road Tuesday night against the Phoenix Suns without superstar LeBron James.

Tuesday's loss eliminated the Lake Show from playoff contention. The San Antonio Spurs, who are currently 10th in the Western Conference, punched their ticket to the play-in tournament after beating the Denver Nuggets.

The Suns have the best record in the NBA (63-16) and are locked in as the number one seed in the Western Conference.

James was out due to a sprained ankle.

While James was out, Anthony Davis returned to action. Heading into Tuesday's game, Davis put on a spectacular 28-performance Sunday night against Denver. Despite a hard-fought battle, the Lakers came up short, losing 118-129.

Legendary Laker Magic Johnson was a guest on ESPN’s "First Take" Monday and said he’s tired of the Lakers "making excuses," also noting that the Lakers could have signed DeMar DeRozan instead of Russell Westbrook.

"Quit making excuses. This thing did not work out, the person did not fit," Johnson said Monday.

DeRozan, an LA native who ended up signing with the Chicago Bulls, is in the conversation for league MVP.

According to Johnson, the Lakers’ "Big 3" of James, Westbrook, and Davis will likely return next season.

"They’re coming back with the same team. Not the same nine role players but the core 3 is probably going to have to come back," Johnson explained.

Therefore, the Lakers front office will be left with no choice but to move its role players around in the offseason, along with an expected coaching change.

"It’s not all on Frank Vogel. We know he’s going to get fired. We know that," Johnson said.

Meanwhile, the LA Clippers clinched the eighth seed and will likely face Minnesota, led by former Clipper fan-favorite, Patrick Beverley, in the first round of the tournament.