Lakers arrive back at LAX

The Lakers arrived at LAX on Oct.12 just hours after winning the NBA Finals in Florida.

LOS ANGELES - After spending months confined to the NBA bubble located outside Orlando, Fla., the Los Angeles Lakers returned home Monday afternoon after winning the 2020 NBA Finals in Game 6 against the Miami Heat.

The L.A. Lakers arrived home on Monday to happy fans after winning the NBA finals.

The flight arrived just before 1 p.m. at the Los Angeles International Airport.

Dozens of fans waited outside the airport to greet the Lakers and in hopes to see their favorite players up close and personal.

LeBron James was the first to exit the plane, holding his NBA Finals MVP trophy, followed by Anthony Davis.

Shortly after exiting the plane, Kyle Kuzma posed with a smile on his face, showing his excitement for being back in LA and as a champion.

Many of the Lakers' players, coaches, and staff spent months away from their families as they finished the rest of the regular season and playoffs at the Disney Sports Complex under coronavirus guidelines. 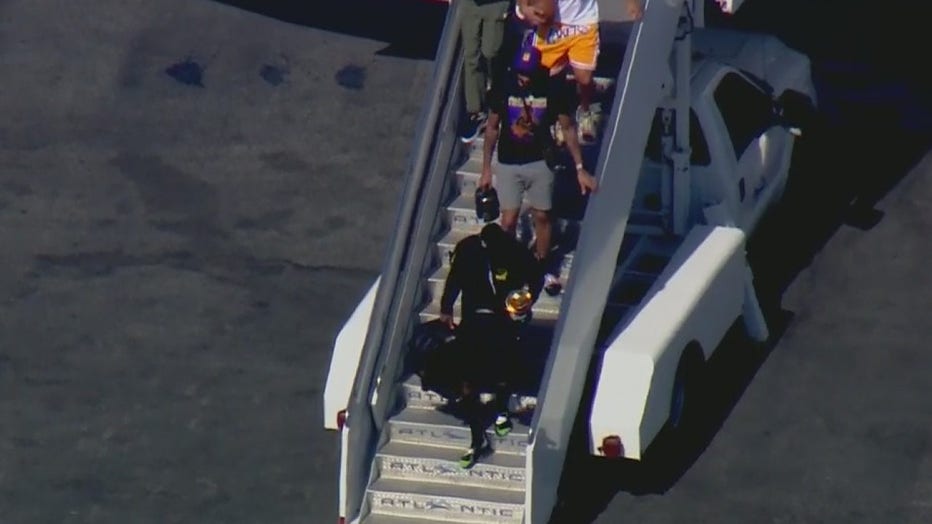 It was the first championship for the franchise in a decade and since the Kobe Bryant era. After the tragic loss of the NBA legend, the Lakers dedicated their season to carrying Bryant's legacy.

James previously earned two Finals MVPs during his time in Miami and one in Cleveland. It was a historic night for the 35-year-old who led the Lakers to a championship in his 17th season.

This was the first championship for all-star Anthony Davis who the Lakers acquired from New Orleans.

Sunday's victory marks the 17th championship in Lakers' history. Now, the Lakers are tied with the Boston Celtics with most NBA championship titles in NBA history.