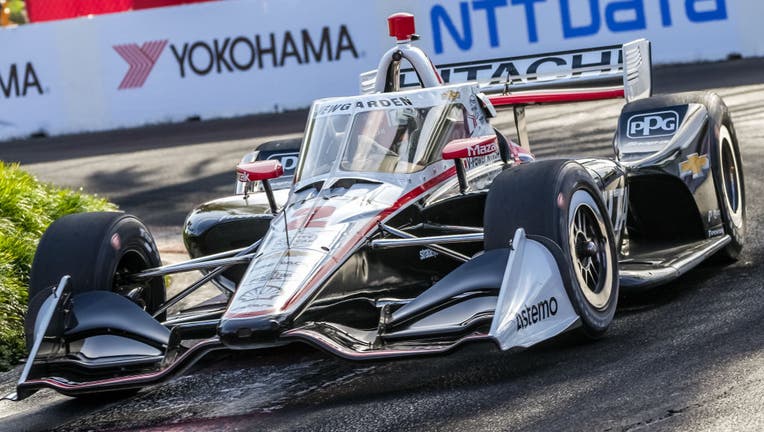 "I've been trying to win a race here for 11 years," Newgarden said moments after the race ended. "It feels so good to finally get it done."

The Valencia-raised Herta had the pole position Sunday and had won the last three NTT IndyCar Series races in California — the 2019 and 2021 editions of the Firestone Grand Prix of Monterey and the 2021 Long Beach race. The series didn't race in California in 2020 due to the COVID-19 pandemic.

Herta led for the first 28 laps of Sunday's race and was third when he crashed.

"I just broke a little too late, got in there, locked the right front, and that's it," Herta told NBC Sports. "It's just a stupid mistake. We were definitely in that thing, running good there in third. It's unfortunate, I feel really bad."

Newgarden joined Herta in the front row of the 26-car field. The Nashville native also won the series' most-recent race, the XPEL 375, March 20 at Texas Motor Speedway in Fort Worth, its first oval race of the season. Herta finished 12th in that race.

Palou started the Long Beach race in the third position and his Chip Ganassi Racing teammate Felix Rosenqvist of Sweden was fourth.

Sunday's race finished under a caution flag after Takuma Sato of Japan hit the tire barriers in turn 8. Newgarden had passed Palou earlier for the lead, and fended off a challenge from Grosjean, who also passed Palou.

Seven-time NASCAR Cup Series champion Jimmie Johnson raced Sunday despite suffering a broken bone on the outside of his right hand in a crash during practice Friday. He started 25th and crashed into a tire barrier with 10 laps to go.

The field consisted of drivers from 15 nations — eight from the United States, two each from Canada, England, New Zealand and Sweden, and one each from Australia, Brazil, Colombia, Denmark, France, Japan, Mexico, Netherlands, Spain and Switzerland.

Bourdais lightly hit the wall seven minutes into the 100-minute race while trying to lap a GTD class Porsche at the iconic hairpin of the Long Beach street course, but was able to make up the time.

"You kind of go into a bit of a trance when you try to pull off something that really shouldn't be possible," Bourdais said. "You're on fire because you're so mad at yourself. I guess I'm accustomed to stupid mistakes and trying to make up for that. Luckily, there wasn't much damage and I'm just glad we got the lead back."

The Grand Prix will conclude with its second Porsche Carrera Cup race, scheduled for 4:20 p.m. Every car competing is identical, the road car- based Porsche 911 GT3. With no technical advantage between cars, driver talent, along with team mechanical skills and strategy, will decide the winner of the 40-minute race.