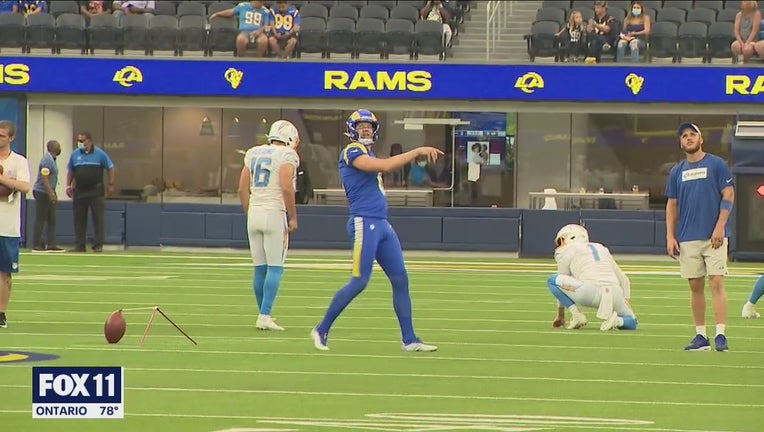 INGLEWOOD, Calif. - Easton Stick completed all seven of his passes for 63 yards and guided the Los Angeles Chargers to their lone touchdown in a 13-6 preseason victory over the Los Angeles Rams Saturday in the first NFL game at SoFi Stadium with fans present.

Stick was two-for-two for 23 yards on the eight-play, 70-yard drive in the third quarter where running back Larry Rountree, a 2021 sixth-round draft choice, ran three times for 29 yards, including a 25-yard run that moved the ball from the Chargers' 39-yard line to the Rams' 36-yard line.

Darius Bradwell, who played two games for the Chargers last season, accounted for the final 18 yards on three carries, including the 1-yard touchdown, before a crowd announced at 68,791 for the preseason opener for both teams.

Stick, the Chargers' fifth-round choice in the 2019 NFL draft out of North Dakota State, is competing with Chase Daniel to be their backup quarterback behind Justin Herbert.

Daniel directed the Chargers on a 21-play, 73-yard drive on the game's opening possession that consumed nine minutes, 47 seconds and was culminated by a 21-yard field goal by Tristan Vizcaino, who is trying to oust Michael Badgley as the kicker.

It was a packed house as fans finally got to see a game at the new SoFi Stadium.

Vizcaino was also successful on his other field goal attempt, a 38-yarder 22 seconds before halftime that tied the score, 6-6. Badgley made his only kick, the extra point following Bradwell's touchdown.

Daniel, who is beginning his 12th season in the NFL and first with the Chargers, completed 15 of 24 passes for 104 yards. His 25-yard pass to tight end Donald Parham on the drive that ended with Vizcaino's second field goal, was the game's longest drive.

The Rams scored their touchdown on a 4-yard pass from Bryce Perkins to Trishton Jackson with 3:18 left in the first half. Matt Gay, who is trying to hold off a challenge from Austin MacGinnis to retain his job, missed the extra point attempt wide right after the Rams were penalized five yards for delay of game.

Fans got a chance to check out the new SoFi Stadium on Saturday when the Los Angeles Rams and Los Angeles Chargers faced-off in their first preseason game of the NFL season.

The Rams had a fourth-and-goal from the Chargers' 5-yard-line with 9:38 to play when Devlin Hodges' pass was intercepted in the end zone by cornerback John Brannon, who played one game with the Chargers in 2020. Hodges, the Rams' starter, completed nine of 19 passes for 85 yards
with the one interception. Perkins completed seven of 10 passes for 42 yards.

Hodges and Perkins are competing to be the Rams No. 3 quarterback behind Matthew Stafford and John Wolford. Perkins signed with the Rams as an undrafted free agent in 2020 after playing the final two seasons of his college career at Virginia. He spent most of the 2020 season on the practice squad. He was on the active roster for the final regular season game and divisional playoff game against Green Bay but did not play.

The Los Angeles Rams and Los Angeles Chargers will face each other Saturday night to open preseason play in the first NFL game at SoFi Stadium with fans present.

"I loved what I saw on the sideline,'' Brandon Staley told the team following his unofficial debut as the Chargers' coach. "I loved how resilient you guys were throughout the game. There's a lot to correct but the main thing - you guys got it. You played together, you played the right way.''

Staley was hired in January after being the Rams' defensive coordinator in 2020 when the team ranked first in total defense, passing defense and scoring defense. He replaced Anthony Lynn, who was fired after missing the playoffs three times in his four seasons as coach, including 2020, when the Chargers were 7-9.

Before the game, Rams coach Sean McVay said he would play "a lot of our depth guys,'' in part because of injured players being held "out as precautionary reasons.''

The Rams and Chargers both played at SoFi Stadium in 2020, but fans were not permitted in an attempt to reduce the spread of the coronavirus.