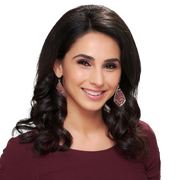 A native of Armenia, Karapetyan moved to the U.S. when she was seven years old. A devastating earthquake, a brewing conflict with Azerbaijan, and the demise of the Soviet Union all contributed to her family's decision to leave their homeland. She grew up in Palos Verdes Estates. Karapetyan worked as a general assignment reporter and fill-in host at KOIN-TV in Portland, Oregon. Prior to that, she was a reporter, anchor, and producer at KIDK-TV in Idaho Falls. Karapetyan began her television career as an intern at KABC-TV in Los Angeles and KFI 640 AM radio in Burbank. Her interest in journalism sparked when she went back for a summer visit to Armenia. She decided to spend her time there not by being a tourist, but by exploring to see what everyday life was like for the majority.

Karapetyan has a Bachelor of Arts Degree in International Relations and Broadcast Journalism from Syracuse University's S.I. Newhouse School of Public Communications. 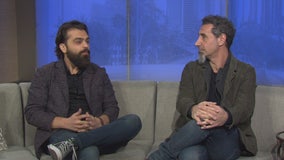 Filmmaker Garin Hovannisian and System of a Down frontman Serj Tankian talked about the new documentary 'I Am Not Alone,' which follows the non-violent yet successful 2018 "Velvet Revolution" in Armenia. 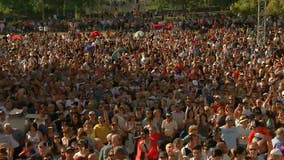 Thousands of people gathered at Grand Park in downtown Los Angeles Sunday afternoon as the Armenian Prime Minister held a speech during a rally.