Elections are stressful. Here are some expert tips to help you cope

Tania Israel, professor of counseling psychology at U.C. Santa Barbara and author of"Beyond Your Bubble: How to Connect Across the Political Divide, Skills and Strategies for Conversations That Work," gives tips to help people cope with stress and anxiety during elections.

Life can be stressful. With access to social media and worldwide headlines nearly 24/7, sometimes it’s hard to escape the fears that overcome the mind.

And it’s no secret that stress and anxiety in the U.S. have increased sharply because of the ongoing COVID-19 pandemic — then add in inflation, an ongoing war overseas, climate change, reproductive rights, mass shootings and you can have yourself a stress monster.

"Every therapist I know is full up with people who are really experiencing so much stress," said Tania Israel, professor of counseling psychology at U.C. Santa Barbara and author of "Beyond Your Bubble: How to Connect Across the Political Divide, Skills and Strategies for Conversations That Work." "The pandemic, politics, there’s so much going on right now, racial injustice, there’s so many things happening that it seems like there’s something every day that’s really upsetting to us and it is hard to handle it."

Politics is a stressor for many because the results have real-life consequences, although not always immediate. As a citizen of the United States, figuring out how to address these issues through voting can be particularly stressful and cause anxiety.

With midterms underway and the next presidential election right around the corner, here are some tips on how to cope and stay healthy — mentally and physically — through election season. 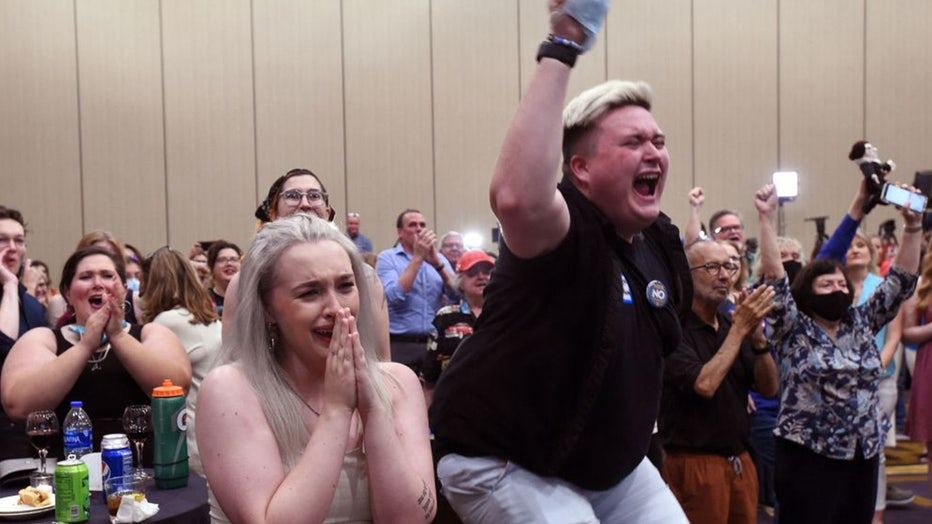 How our bodies respond to stressors

"What happens when we are under stress, especially for an extended period of time is it affects not only our mental health but our physical health also. So, our bodies react to any kind of threat as if that threat is a saber-toothed tiger because our bodies were, our systems were designed for that kind of survival," Israel said.

"So that means ... our adrenaline is up, our muscles tighten, our breathing gets shallow. And if we maintain that over a long period of time, it can really have longer-term consequences for our health. So what I encourage people to do is try to get your body out of what we call that fight or flight or freeze response."

"We are exposed to a stressor and alarm bells go off, do we fight or run? Well, when we can’t run away and we can’t fight, we sit still and obsess and worry and suppress our immune system," said clinical psychologist Michael Adamse, Ph.D. and author of "Make America Sane Again: A mental health expert weighs in."

This stage can also manifest itself physically with a rapid heart rate, increased cortisol (which is a hormone produced through stress) and a boost of energy.

"Our body tries to adapt, ‘What can I do to mobilize my body to deal with this?‘ Your body is pretty clever and tries to control your body’s responses so you’re not overwhelmed. But, under prolonged stress which you might get from internal or external news, your pessimism, that resistance will overwork itself," Adamse explained.

Inducing your body’s natural response to stressors can only last so long before you finally hit a wall which leads to the third stage of stress: exhaustion.

This is the stage you don’t want to get to but sometimes life happens and your body naturally responds by shutting down mentally and can lead to physically debilitating behaviors like addiction, according to Adamse.

"Fatigue, burnout, depression, anxiety, decreased stress tolerance - all of these factors conspire to put a person in a very vulnerable position," Adamse said. 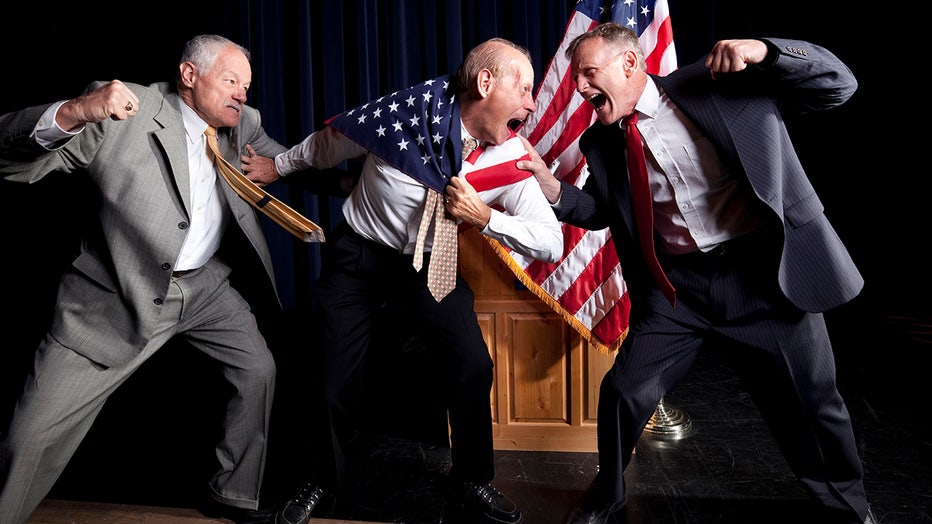 Tips to reduce anxiety and stress during elections

Let it go or get involved

One way to possibly reduce stress and anxiety during elections is to completely disengage once you know who you’re voting for, and then once again after you leave the polls or mail out your ballot.

"Vote, give your opinion, but beyond that, you can’t control the outcome. There’s a little detachment you need from that," Adamse said.

"Again, the stakes are high for many people but your input is limited. This is about as far as you can go, by voting and having an opinion. Disengage a little. It is what it is," Adamse continued.

This doesn’t go to say that a person’s vote doesn’t matter, Adamse stressed (no pun intended). But short of running for elected office, most Americans do their due diligence by researching the candidate who best aligns with their views on pressing issues, vote and then let go.

"Believe that your vote helps, but beyond that, you can’t control the outcome," Adamse said. "Take a deep breath, roll with the punches and have faith, which you don’t hear a lot about anymore."

On the other side of the coin, for those who cope better by staying active, you can get involved with the election cycle and engage in a meaningful way. 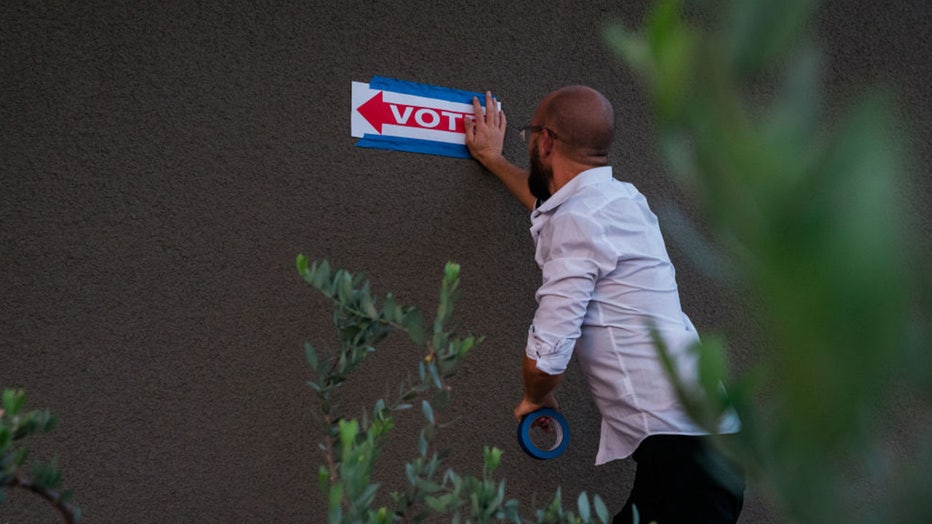 FILE - A poll worker puts up a "Vote" sign outside a polling location at the Phoenix Art Museum in Phoenix, Arizona, US, on Tuesday, Aug. 2, 2022. (Caitlin O'Hara/Bloomberg via Getty Images)

If you just can’t stand to wait and see what happens, insert yourself where you could make a difference, Israel said.

"If you are worried about whether or not our elections are working well, go volunteer at the polls," Israel suggested. "You can be right there and learn more about how it’s working and help it to work better. You can talk to voters about candidates and about ballot measures and have those more meaningful conversations so you can hear where people are coming from and to support your own values that you have. Help get out the vote. Get more people engaging in meaningful ways in elections. I always say, there is no fear when there is phone banking, that rather than just sit around and be frustrated, you can actually do something that can be meaningful to make a difference."

Some could ease their tension with people who are on the opposite side of an issue and have a meaningful conversation with someone with opinions different from their own.

"One index of intelligence is the ability to see more than one position at the same time. We’re sorely lacking taking into consideration another point of view and with people being polarized, people don’t really have the ability to shift ways," Adamse said.

Take a break from your electronics and social media apps 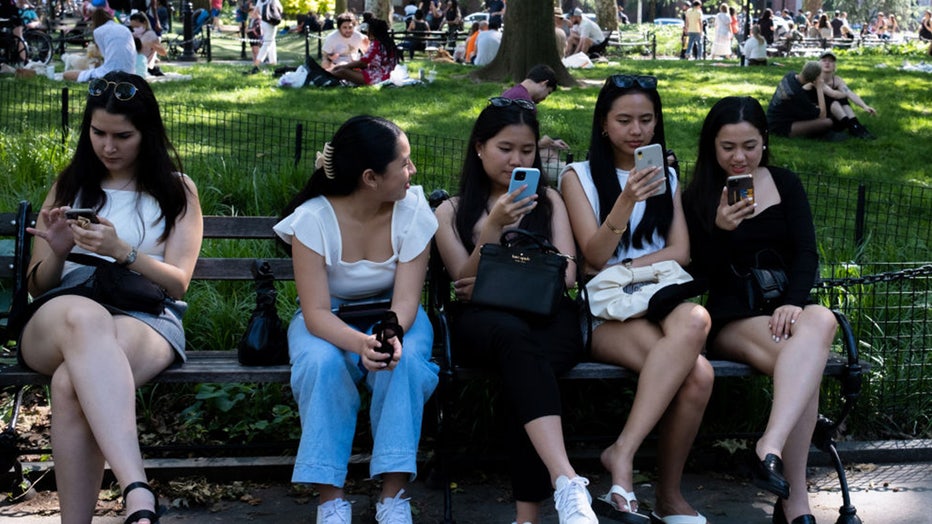 FILE - People look at their phones in Washington Square Park during Memorial Day Weekend on May 29, 2022 in New York City. (Alexi Rosenfeld/Getty Images)

Another way to reduce stress and anxiety during election season is to take breaks from your phone, laptop and other electronics that give you access to current events.

"I think one helpful approach to our relationship with our phones and social media in general is to have a goal for what is it that you want to get out of this interaction that you’re having with it, how long do you want to spend with it in this interaction and then go do that for that amount of time and then step away from it," Israel advised. "So that rather than it being the constant of what we are exposing ourselves to and then sometimes we’re not doing it. Really being intentional about when you’re going to consume media and social media. Maybe turn off all those notifications that your phone is giving you of whenever news is happening and when you’ve got a notification on social media. We don’t need to be on top of these things every moment."

"Really being intentional about when you’re going to consume media and social media...We don’t need to be on top of these things every moment."

Israel suggested that social media and media, in general, tend to represent the "more extreme" views of people on either side when the majority are not truly that way.

According to what Israel has observed, people who are active on social media and advocate for their political views tend to share a very skewed version of their opinions that don’t tell the whole story.

"The people who post and reshare political things on social media are the people who have views more at one end of the other and this is even more important, the things that get reshared most widely are not about positions on issues but are about negative views of people on the other side. So we’re really increasing our negativity toward other people through social media," Israel continued.

"And then, finally, just our own minds have cognitive biases that mean that we are focusing on things that support our own views, we’re dismissing and ignoring things that contrast with our views so we’re getting a very narrow slice of reality and also, our minds tend to see people who disagree with us as being ill-informed or misinformed and also as being sort of questionable morally. And these are just ways that our minds work. I think about them as a flaw in our operating system. As human beings, our brains just don’t always see things objectively and clearly and so all of these things are skewing it so that what we’re perceiving is this world in which everything is very extreme and the people who disagree with us, we think that they’re awful people," Israel said.

"The things that get reshared most widely are not about positions on issues but are about negative views of people on the other side."

Uncertainty in correlation to the economy, disease and especially politics can lead anyone to experience stress and anxiety and fuel their fear of the unknown.

"Fear can be a good reason to mobilize you to do things but unfortunately, when fear is uncontrolled, unbridled, it leads to reduced immune response," Adamse said. So a person is at risk of actually becoming more susceptible to illness. "So people kind of set themselves up to get sick."

"The political climate has been highly polarized. This polarization, no matter which side of the aisle you’re on, people have a major emotional investment in the outcome," said Adamse.

"This is more pronounced, especially during election times. When it gets closer, the stakes are higher so anxiety increases." Adamse explained. "Whoever wins, it’s a disaster for the other side and that gives people anticipatory anxiety which is a fear of what might be coming down the road."

Regardless of that fear of uncertainty, Adamse stressed that people still need to live life and let go during appropriate times.

Giving yourself a goal to not engage and take part in a hobby or spending time with loved ones can help you forget your worries and fears for a while, according to Israel.

"We somehow need to hold in our minds both the idea that elections are important and they have consequences and it’s important to participate in them, and at the same time the other side is not necessarily how we’re seeing them. And particularly in terms of who the other people who are supporting a politician or a ballot measure. The people who are voting a certain way are not necessarily in opposition to who we are as people," Israel added.