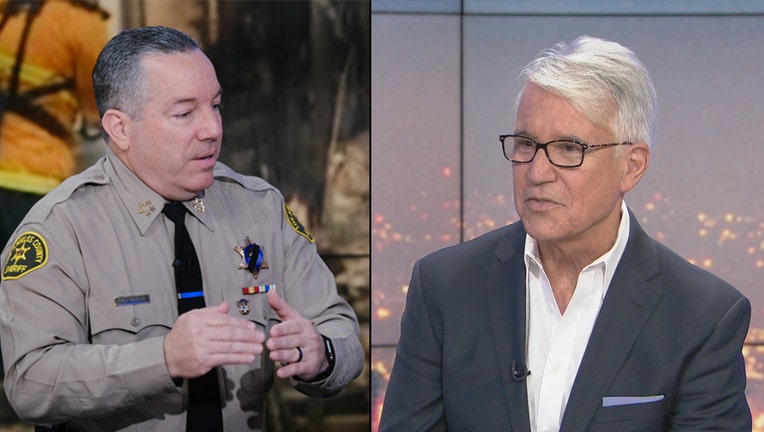 LOS ANGELES - Los Angeles County Sheriff Alex Villanueva has notified District Attorney George Gascón that he will begin sending his sheriff's detectives to parole hearings to "give victims a voice" as long as the newly elected DA continues to refuse to allow his prosecutors to attend them as part of his new reforms.

"At the request of family members, the LASD will do everything possible to give victims a voice at the table to address their concerns," the letter continued.

Villanueva said that the decision was made "despite the lack of funding and resources to my department."

"I strongly believe this is the right thing to do," Villanueva wrote.

Shortly after being sworn into office in December, Gascón issued a directive on so-called "lifer parole hearings" that indicated that the office's "default policy is that we will not attend parole hearings and will
support in writing the grant of parole for a person who has already served their mandatory minimum period of incarceration, defined as their MEPD (Minimum Eligible Parole Date), YEPD (Youth Parole Eligible Date) or EPD (Elderly Parole Date)."

"If the CDCR (California Department of Corrections and Rehabilitation) has determined in their Comprehensive Risk Assessment that a person represents a 'high' risk for recidivism, the DDA (deputy district attorney) may, in their letter, take a neutral position on the grant of parole," the directive noted.

It also noted that the crime for which someone is convicted is "of limited value in considering parole suitability years or decades later," that the value of a prosecutor's input in parole hearings is "also limited" and that "currently, sentences are being served that are much longer than the already lengthy mandatory minimum sentences imposed."

The office will continue to "meet its obligation to notify and advise victims under California law, and is committed to a process of healing and restorative justice for all victims," according to the directive, which was issued on Dec. 7.

RELATED: Prosecutors can't be at parole hearing for 'Subterranean Rapist' due to Gascón's policies

"The role of a prosecutor, and their access to information ends at sentencing. The Parole Board, however, has all the pertinent facts and evaluations at their disposal. The Parole Board’s sole purpose is to objectively determine whether someone is suitable for release. Both times before, this particular individual has been denied parole. Once again, there is no indication that this person will be released, as the parole board denies release in over 85% of cases."

Gascón has faced heavy criticism from the public, judges, other prosecutors and crime victims over his sweeping changes to the county's criminal justice system. The DA maintains that his new directives are in order to deviate from the current mass incarceration system, which he said disproportionately affects Black and Latino defendants.