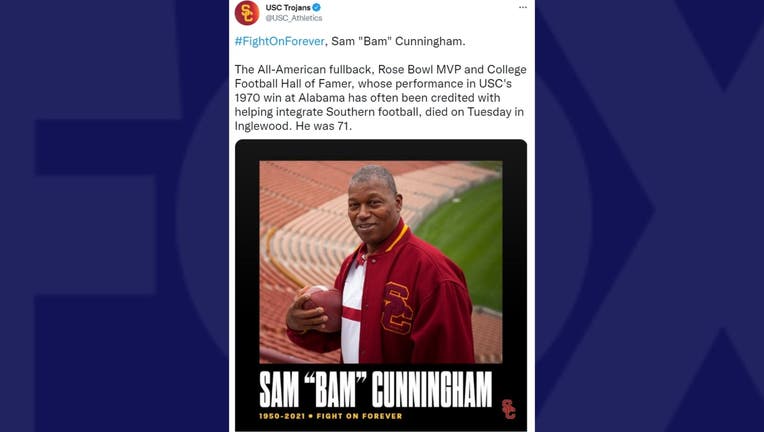 INGLEWOOD, Calif. - Sam "Bam" Cunningham, an All-American fullback at USC and College Football Hall of Famer who went on to become the New England Patriots' franchise leader in rushing, died Tuesday in Inglewood at age 71, according to the university.

A cause of death was not immediately announced.

Cunningham helped lead the Trojans to a 1972 national championship, capping his All-America season. He scored four touchdowns in the 1973 Rose Bowl, earning him MVP honors.

Cunningham is also credited with helping spark the integration of college football in the Deep South, thanks to his two-touchdown performance against the University of Alabama in Birmingham in 1970. The performance was so impressive to Alabama head coach Bear Bryant that it convinced him and the university to integrate its team.

Cunningham was the 11th overall draft pick in 1973, chosen by the New England Patriots. He played nine season for the team, amassing a franchise- leading 5,453 yards and scoring 49 touchdowns, earning a spot on the AFC Pro Bowl team in 1978. The team inducted him into its Hall of Fame in 2010.

"Extremely saddened by the loss of a college football legend," USC head coach Clay Helton wrote on Twitter Tuesday. "As good a man as he was a player. Thank you Sam for being the example of what a Trojan should be. You will be missed but never forgotten."

"Not just a great football player but an incredible man," Leinart wrote. "Really had a huge influence on my team at USC. Loved when I got to see him. RIP to a legend."

He is survived by his wife, Cine; daughter, Samahndi; and brothers Randall, Bruce and Anthony. Randall Cunningham was also an NFL standout, primarily with the Philadelphia Eagles but also with the Vikings, Cowboys and Ravens.