Both soldiers were killed when their vehicle was hit by a roadside bomb in southern Afghanistan, officials said. Two others were hurt.

KABUL, Afghanistan - Military officials identified two U.S. service members who were killed Saturday when their vehicle was hit by a roadside bomb in southern Afghanistan. 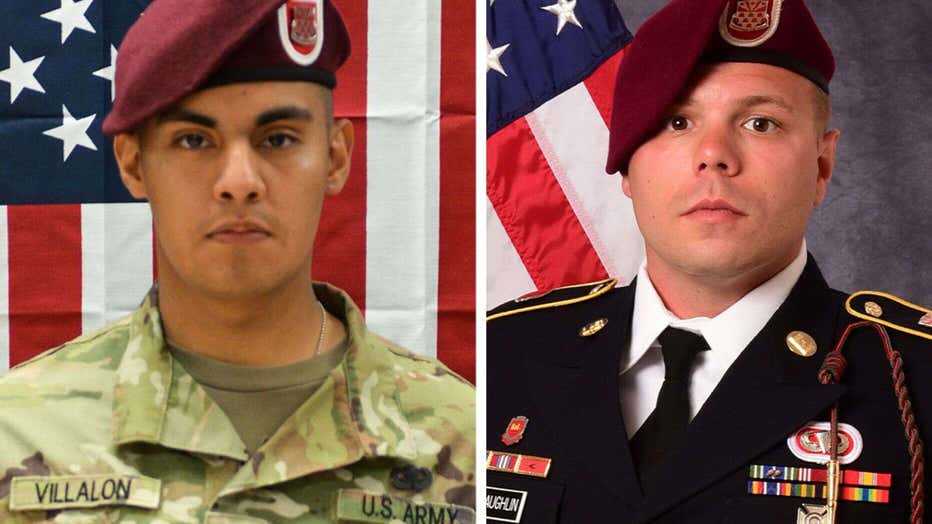 “When our nation called for its best airborne combat engineers to deploy into harm’s way, Staff Sgt. McLaughlin and Pfc. Villalon answered without hesitation. They lived their motto, ‘Essayons,’ and embodied the values of the All-American engineer,” Col. Art Sellers, commander of the 3rd Brigade Combat Team, 82nd Airborne Division, said in a statement. “Their loved ones are now surrounded by a caring community offering comfort and assistance through this difficult time.”

McLaughlin joined the Army in 2012 and after completing Basic Combat Training and Advanced Individual Training, he was assigned to the 68th Engineer Company, 62nd Engineer Battalion at Fort Hood, Texas, as a horizontal construction engineer, FOX News reported.

In 2016, he was assigned to the 307th Airborne Engineer Battalion, 3rd Brigade Combat Team, 82nd Airborne Division at Fort Bragg, N.C., where he served as a horizontal construction engineer and later as a squad leader. This was his first combat deployment.

McLaughlin is survived by his wife and four children.

Villalon joined the Army in 2018 and after completing Basic Combat Training and Advanced Individual Training in 2019 at Fort Leonard Wood, Mo., he was assigned to the 307th Airborne Engineer Battalion, 3rd Brigade Combat Team, 82nd Airborne Division at Fort Bragg where he served as a combat engineer. This was also his first combat deployment.

Villalon is survived by his parents.

The latest attack seemed certain to stall fresh efforts to restart the on-again, off-again peace talks between Washington and the Taliban.

U.S. peace envoy Zalmay Khalilzad has been pressing the insurgents to declare a cease-fire or at least reduce violent attacks. That would give a window in which the U.S. and the Taliban could forge an agreement to withdraw all of America's troops. That agreement would also set out a road map for direct Afghan-to-Afghan talks, mapping out the country's post-war future.

The Taliban leadership decided at the end of December to support a temporary cease-fire to allow for a peace deal to be signed, but they never said when it would go into effect. The final approval required from their leader, Maulvi Hibatullah Akhundzada, was never announced.

Earlier Saturday, both NATO and Afghan officials had confirmed a roadside bomb hit a U.S. army vehicle, without mentioning casualties. In a short statement, a NATO spokesman said that officials were still “assessing the situation and will provide more information as it became available.”

An Afghan official said the attack had taken place in the Dand district of Kandahar province. The official was not authorized to speak with media and requested anonymity.

The Taliban now control or hold sway over roughly half of Afghanistan. The militants continue to stage near-daily attacks targeting Afghan and U.S. forces, even as they hold peace talks with the U.S. Scores of Afghan civilians are also killed in the crossfire or by roadside bombs planted by militants.

In November, two U.S. service members were killed when their helicopter crashed in eastern Logar province. The U.S. military at the time said preliminary reports did not indicate it was caused by enemy fire, although the Taliban claimed to have shot down the helicopter — a claim the U.S military dismissed as false.

The U.S. currently has about 13,000 troops in Afghanistan. About 5,000 of them are doing counterterrorism missions. The remainder are part of a broader NATO mission to train, advise and assist the Afghan security forces.