While fielding questions on the 20th anniversary of 9/11, former President Donald Trump again hinted he would seek the presidency in 2024.

Former President Donald Trump appeared to rule out former Vice President Mike Pence as his running mate should he opt to mount a third bid for the White House in 2024.

"I don’t think the people would accept it," Trump told the Washington Examiner on Tuesday of the pair running together again.

Trump cited friction stemming from the aftermath of the 2020 presidential election, in which he lost to President Joe Biden yet repeated a false claim that the election had been stolen from him, and suggested their differences are too stark to overcome heading into 2024, according to the conservative news website.

"Mike and I had a great relationship except for the very important factor that took place at the end. We had a very good relationship," Trump told the website. "I haven’t spoken to him in a long time." 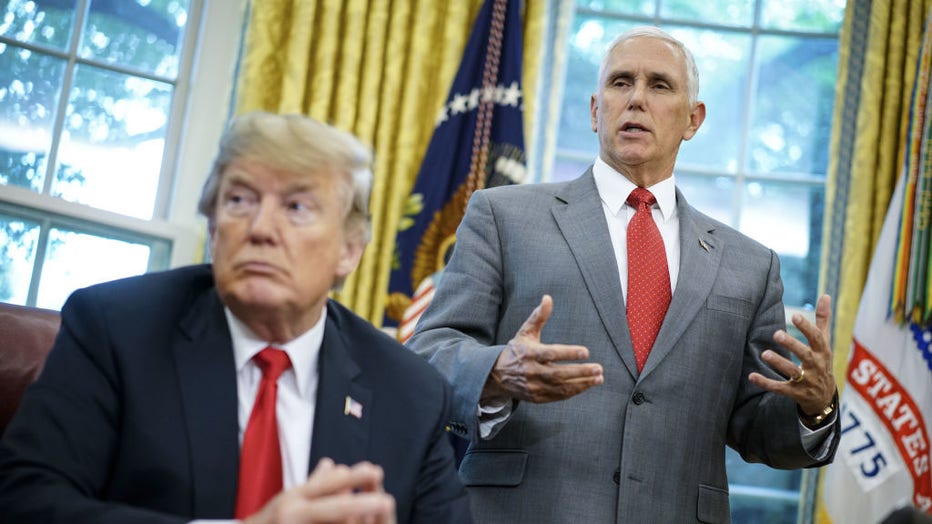 FILE - US Vice President Mike Pence speaks as US President Donald Trump looks on before signing an executive order on immigration in the Oval Office of the White House on June 20, 2018, in Washington, D.C. (Photo credit: MANDEL NGAN/AFP via Getty Ima

During the congressional certification of Biden’s win, Trump falsely suggested that Pence — who was presiding over the count as vice president — could have overturned the results. But vice presidents play only a ceremonial role in the counting of Electoral College votes. Experts say any attempt to interfere in the count would have represented an extraordinary violation of the law and an assault on the democratic process — sparking a Constitutional crisis.

The electoral count on Jan. 6, 2021, was also interrupted when a mob of Trump’s supporters violently smashed inside the Capitol building, assaulting police officers and hunting down lawmakers. Pence, who released a letter moments before the session got underway laying out his conclusion that he had no authority to overturn the will of the voters, was rushed to safety as some rioters chanted "Hang Mike Pence!"

As recently as last month, Pence directly rebutted Trump’s claims that he somehow could have overturned the results of the 2020 election, saying that the former president was simply "wrong."

"I had no right to overturn the election," Pence told a gathering of the conservative Federalist Society in Florida.

"The American people must know that we will always keep our oath to the Constitution, even when it would be politically expedient to do otherwise," Pence told the group on Feb. 4. He noted that, under Article II Section One of the Constitution, "elections are conducted at the state level, not by the Congress" and that "the only role of Congress with respect to the Electoral College is to open and count votes submitted and certified by the states. No more, no less."

A bipartisan group of lawmakers is now pushing to update the Electoral Count Act to eliminate any ambiguity about the vice president’s role.

Pence’s declaration marked his most forceful response yet to Trump, as the former vice president begins laying the groundwork for his own potential run for president in 2024.

As Trump’s vice president, Pence was exceptionally deferential to him, never publicly voicing disagreement and defending even his most controversial actions during their time in the White House. Trump, on his part, told the Washington Examiner this week: "I still like Mike."

RELATED: Pence: Trump and I may never see 'eye to eye' on Capitol riot

More than two years before the next presidential election, no one has officially announced a bid for the 2024 presidential election — including Trump. But he has hinted at plans to run for a third time after winning in 2016 and losing to Biden four years later and wields a considerable amount of power over the GOP heading into a tumultuous primary season.

About 7 in 10 Republicans said Trump should run for president again in 2024, according to a CBS poll last month. Among the most common reasons they cited: He’s the best Republican candidate and has the best chance of winning.

Those close to Cheney, Hogan and Kinzinger expect one of them, if not more, to launch a presidential bid after the 2022 midterms. While all three are nationally known to some degree, their goal would not necessarily be to win the presidency.

Above all, they want to hinder Trump's return to the White House, at least compared with 2020, when his allies cleared the field of any Republican opponents and persuaded some states to cancel primary contests altogether.