TOLUCA LAKE, Calif. - Halloween parties have been banned and trick-or-treating is strongly discouraged.

In a year like no other, Halloween will be like no other. And in Toluca Lake there are plenty of homes displaying signs saying “no trick-or-treating”.

When it comes to Halloween, Bob Wexler is serious.

There’s plenty to see on Wexler’s front lawn in Toluca Lake… from gruesome to scary. But for kids, this might be the scariest of all.

House after house in Toluca Lake with a sign that reads no trick-or-treat. 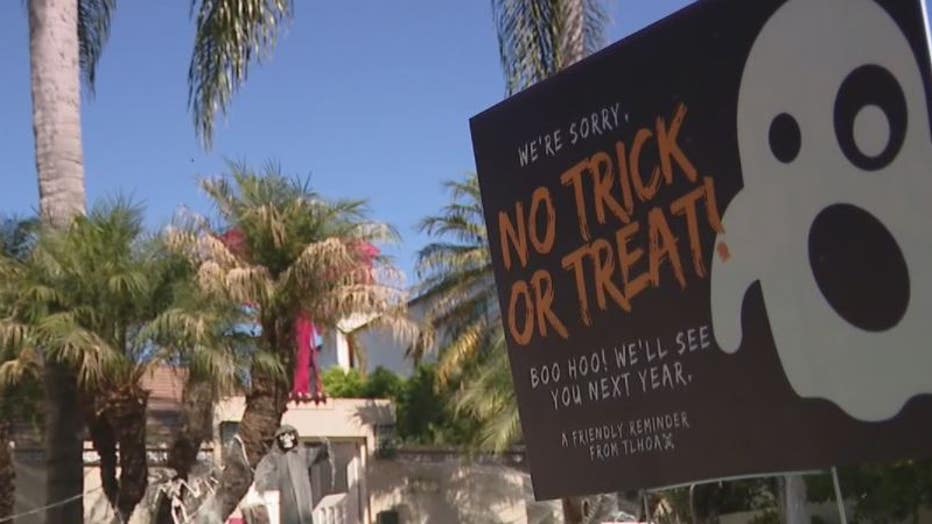 "I think that it’s very important this year that kids can come out and see the decorations and people can celebrate in that way. It’s also very important that we stay safe,” said resident Bob Wexler.

Others agree… at least those that put the sign up front.

“The city sent us an email and asked us to put these signs up on our property. And I think the city is just trying to do its part in following the county guidelines,” said Toluca Lake resident Carmen Italia.

There’s no signs in the city of Beverly Hills... at least not the kind warning not to trick-or-treat.

Even though there, that kind of kiddie fun is not just discouraged, it’s out all banned.

“We believe that our residents and our children have been made aware the fact that there is no trick-or-treating in the city. If people are coming from out of the area and they don’t know about it, the first step is really the educational piece,” said Beverly Hills Mayor Lester Friedman.

The city of Beverly Hills can give out tickets if people don’t comply, but most residents know not to give out candy.