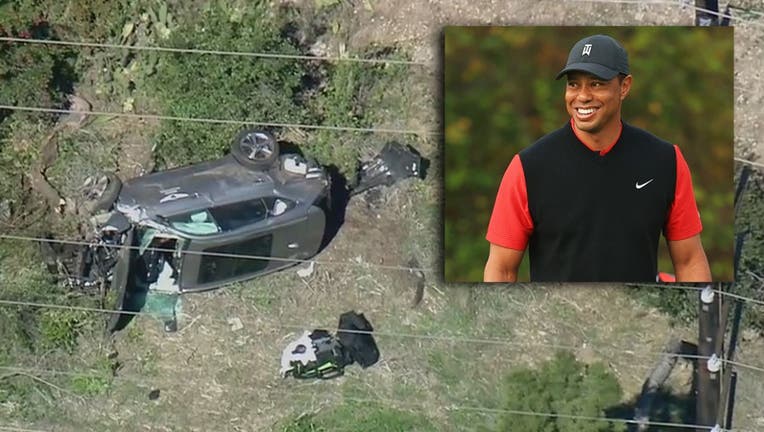 LOS ANGELES - Golf icon Tiger Woods is back home after spending a significant amount of time at the hospital following a horrific single-vehicle crash in Rolling Hills Estates.

On Tuesday, Woods took to social media to thank the surgeons, doctors and nurses for taking care of him.

On the morning of Feb. 23, the golf legend left the luxurious Terranea Resort in Rancho Palos Verdes in a 2021 Genesis GV-80. While driving the courtesy vehicle downhill on the northbound side Hawthorne Boulevard at what Los Angeles County sheriff’s officials said was at a high rate of speed, Woods veered into the center divider, into oncoming traffic, before the SUV tumbled downhill where he hit a tree.

"I arrive on scene and immediately I notice the vehicle rolled over off the side of the roadway. As soon as I got out of my patrol car, a neighbor came up and said ‘deputy, I think the driver’s still trapped inside.’ So, I ran over the vehicle and I noticed there was a large hole in the windshield and I was able to get my upper body inside to check on the wellbeing of the driver, and I see Tiger Woods sitting in the driver’s seat. At that time, I don’t recognize who he is in the moment, but I ask him 'hey, what’s your name?' And he looks at me and he says ‘Tiger’ and it took me about half a second but I recognized him instantly and I didn’t say anything because I had a job to do, but I went into my screening questions to check his mental state. I’m asking him if he knows where he’s at, what day it is, and he’s answering me quickly so to me, that tells me that he’s lucid and he’s aware of what’s going on and he seems calm," Gonzalez said.

Los Angeles County Deputy Carlos Gonzalez was the first person to arrive at the scene of the Tiger Woods crash site. He recounted what he saw on Good Day LA.

Once firefighters arrived, Woods was pulled from the SUV and rushed to the UCLA-Harbor Medical Center where he underwent emergency surgery. Doctors said that woods was awake and responsive following the surgery.