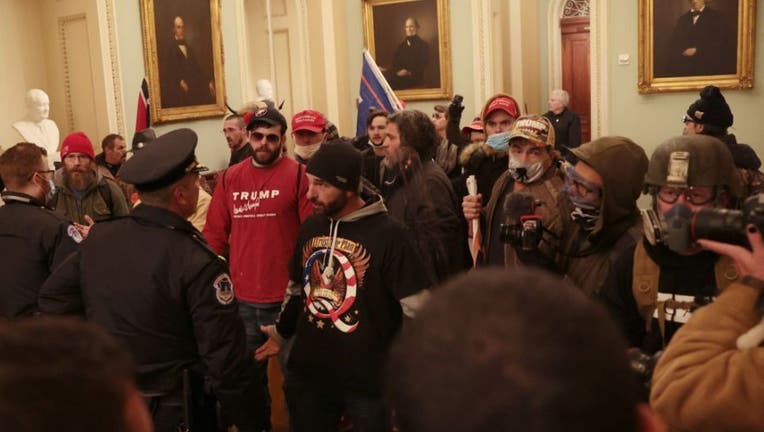 LOS ANGELES - As congress was preparing to certify the results of the Nov. 3 election, thousands of pro-Trump protesters stormed the U.S. Capitol causing panic and violence.

Members of the congressional delegation found themselves barricaded in their offices and other locations inside as people made their way through halls and inside the Senate chamber, many shouting "Trump won that election" and "Where are they?"

The Capitol building was immediately placed on lockdown.

Rep. Karen Bass, D-Los Angeles, said she is absolutely shocked to see the US Capitol like this.

"This is just a sad day in American history, when its’s actually one of the days that the world looks to us for because this was the beginning of the peaceful turn of power. And we have a president that still refuses to admit that he lost the election," Bass said while on FOX 11 News.

Karen Bass details the events that occurred at the US Capitol

Congresswoman Karen Bass joined FOX 11 News to describe her experience of what happened as a large protest broke out at the US Capitol.

Bass was not in the chambers when the protest sparked. Even though the large protest halted congressional proceedings she says it will not stop them from transferring power, no matter how long it takes.

Meanwhile, Rep. Ted Lieu, D-Los Angeles, has called on Vice President Mike Pence to invoke the 25th Amendment, a process that would remove Trump from office. Lieu said Trump "is detached from reality.''

"The protesters disrupting the constitutional process right now must back down and let Congress do their job,'' Calvert wrote on Twitter. "This is no way to express their disappointment in the election process. Violence is never acceptable.''

Several lawmakers expressed disbelief and sadness over the events that unfolded today.

"It is appalling and jarring. I think it is jarring to most Americans to see the Capitol desecrated in such a way. It shouldn’t be the case that people can walk off the street and feel like they can walk into the house chamber or the senate chamber or occupy the speaker’s rostrum," said Rep. Mark Takano, D-Riverside.

Rep. Mark Takano, D-Riverside, expressed disbelief today that the U.S. Capitol Building was besieged by supporters of President Donald Trump as Congress was debating the results of the Nov. 3 presidential election.

He said the disturbance of a democratic procedure is unfortunate.

Takano was not at the capitol today; he told FOX 11 News that he was in his office and then left to grab lunch. As he returned to his office police told him to evacuate.

"There were a number of texts coming in from my constituents and family members wondering if I was in a safe place. So I’ve had to be reassuring to them as well," he added.

During the chaos, one woman was shot and killed inside the Capitol, several officers were also injured.

"This is America 2021. It was a sad day for democracy, and I fear this will precedent and other groups will feel they can storm in the Capitol," said Rep. Brad Sherman.