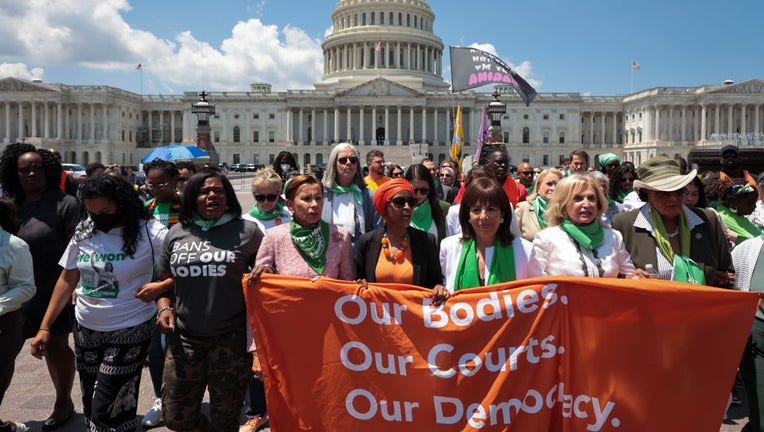 Democratic lawmakers take part of a demonstration at an abortion rights rally outside Capitol Hill. (Oliver Contreras/For The Washington Post via Getty Images)

WASHINGTON - The U.S. Supreme Court has overturned the landmark 1973 Roe v. Wade case that legalized abortion nationwide, letting the states have the final say, according to the final opinion that was previously leaked but finally issued Friday.

The ruling on a case known as Dobbs v. Jackson Women’s Health Organization sets in motion a series of events that will likely lead to abortion being banned or severely restricted in roughly half of the 50 states.

"We therefore hold that the Constitution does not confer a right to abortion. Roe and Casey must be overruled, and the authority to regulate abortion must be returned to the people and their elected representatives," Alito wrote, in an opinion that was very similar to the leaked draft.

Authority to regulate abortion rests with the political branches, not the courts, Alito wrote. 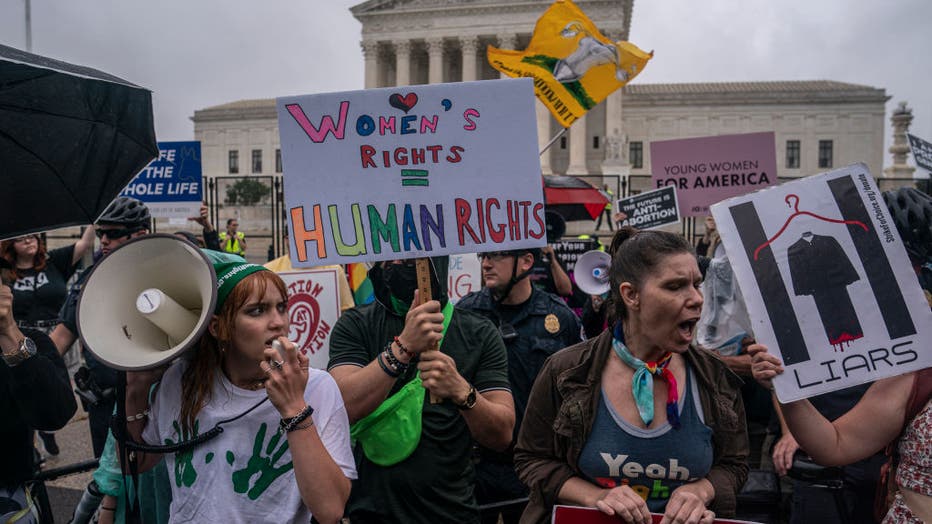 Abortion-rights activists chant during a rally in front of the Supreme Court on June 23, 2022 in Washington, DC. (Photo by Nathan Howard/Getty Images)

Four justices would have left Roe and Casey in place. Chief Justice John Roberts would have stopped short of ending the abortion right, noting that he would have done no more than uphold the Mississippi law at the heart of the case, a ban on abortion after 15 weeks. He wrote that there was no need to overturn the broad abortion precedents to rule in Mississippi's favor.

Justices Stephen Breyer, Sonia Sotomayor and Elena Kagan — the diminished liberal wing of the court — were in dissent.

"With sorrow—for this Court, but more, for the many millions of American women who have today lost a fundamental constitutional protection—we dissent," they wrote, warning that abortion opponents now could pursue a nationwide ban "from the moment of conception and without exceptions for rape or incest." 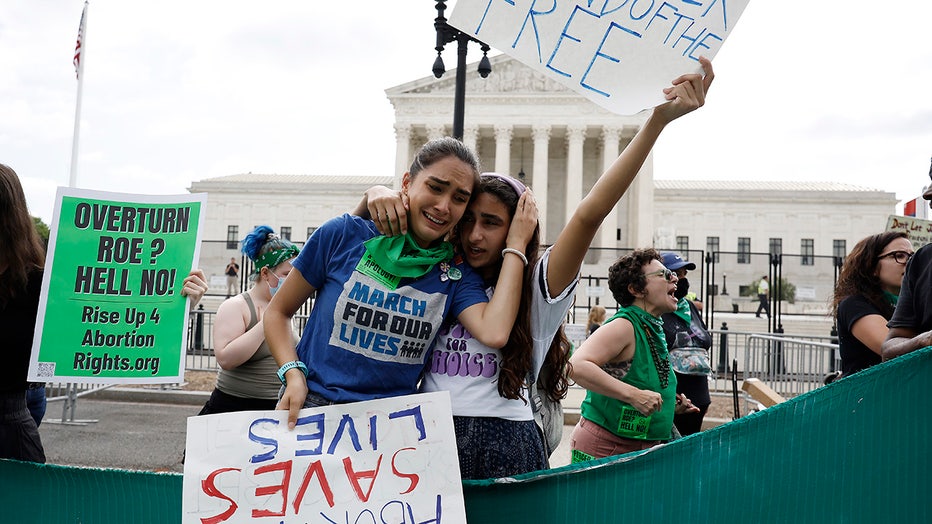 The ruling was foreshadowed by a 98-page draft opinion leaked on May 2, first published by Politico. The leak shocked court watchers for the breach of trust and the potential ruling prompted several protests at the Supreme Court, in cities across the U.S., and even some protests by liberals outside the conservative justices’ homes in Maryland and Virginia.

It wasn’t clear who leaked the opinion, or for what purpose. Chief Justice John Roberts later ordered the court's marshal to undertake an investigation that is still ongoing.

Abortion clinics and many in law enforcement have been preparing for an increase in violence since the opinion leaked. The official ruling will likely spark protests in many U.S. cities with abortion rights being sharply curtailed.

Threats against the Supreme Court justices have also increased in recent days, with protesters sometimes gathering outside their homes. A California man carrying a gun, knife, and zip ties was arrested on June 8 near Kavanaugh’s Maryland house after threatening to kill him.

Eight days later, President Joe Biden signed a bill to give around-the-clock security protection to the families of justices after being approved unanimously by the Senate. Justices were already provided 24-hour protection by the U.S. Marshals, and the new law expands that protection to their families.

Where abortion will likely be banned with Roe v. Wade overturned 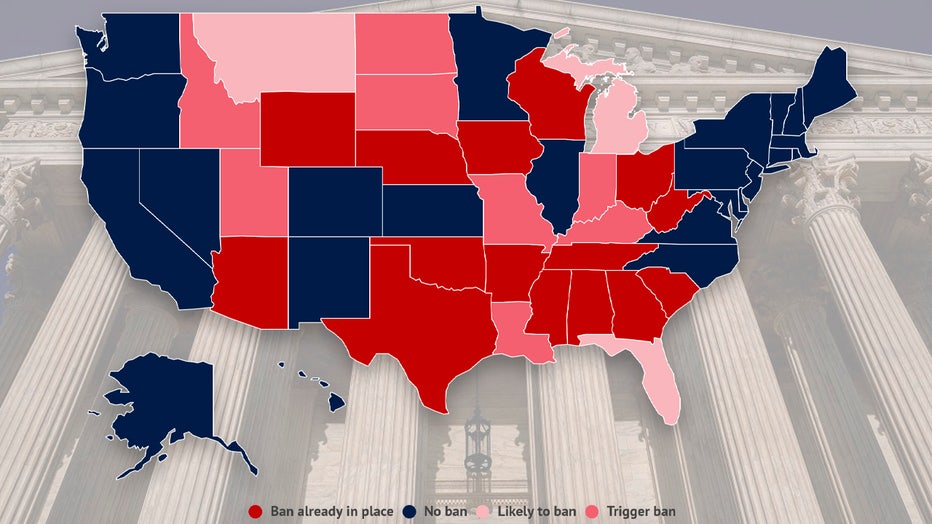 RELATED: State by state: Where abortion will be illegal after Supreme Court Dobbs v. Jackson ruling

Some states had already been preparing for the potential that the high court would weaken or overturn Roe, giving the states the power to decide the legality of abortion.

Twenty-two states, largely in the South and Midwest, already have total or near-total bans on the books, according to the abortion-rights think tank Guttmacher Institute. Aside from Texas, all had been blocked in court because of Roe.

Thirteen states have so-called trigger laws, which immediately ban abortion with Roe being overturned and presumably go into effect following the ruling.

One state is Arkansas, where Republican Gov. Asa Hutchinson has called for an investigation into the leak while backing the draft opinion. Alabama Gov. Kay Ivey said the leak was an "outrageous" attempt to manipulate the court and had called for prayer that the justices would "remain steadfast."

In Texas, Attorney General Ken Paxton said after the leak that he’d continue to "pray for the end of abortion access across our nation."

Mississippi also has a law that automatically bans abortion and Diane Derzis, the owner of the state’s only clinic, previously said she’d close if the draft opinion was adopted.

"You put four people on the court who said they’re going to overturn Roe — that’s why they were put on. When you do that, I don’t know how you’re surprised when that’s going to happen," Derzis said previously.

In Wisconsin, which has an 1849 abortion ban on the books, Planned Parenthood immediately halted all scheduled abortions at its clinics in Madison and Milwaukee following the high court's ruling.

RELATED: What is mifepristone? How overturning Roe v. Wade could impact abortion pills

The Supreme Court of the United State on Friday overruled Roe v. Wade. Sen. McConnell and other lawmakers are reacting to the ruling.

"This is an historic victory for the Constitution and for the most vulnerable in our society," he said.

House Speaker Nancy Pelosi, speaking at a press conference Friday, said GOP members of Congress will push for a nationwide ban on abortion if they win majorities in both houses.

"Because of Donald Trump, Mitch McConnell, the Republican Party and their supermajority on the Supreme Court, American women today have less freedom than their mothers," Pelosi said.

Roe v. Wade overturned: Biden speaks to nation, saying 'This is not over'

President Biden spoke to the nation after the Supreme Court ruling to overturn the 1973 Roe vs. Wade decision. The outcome is expected to lead to abortion bans in roughly half the states.

President Joe Biden said Friday that "it’s a sad day for the court and the country."

"Now with Roe gone, let’s be very clear, the health and life of women across this nation are now at risk," he said from the White House.

He added that "the court has done what it’s never done before — expressly taking away a constitution right that is so fundamental to so many Americans."

How Americans feel about abortion rights, according to polling

Protesters had gathered outside the Supreme Court in anticipation of the 6-3 ruling.

Polls show that a large majority of Americans want to preserve access to abortion — at least in the earlier stages of pregnancy.

Gallup conducted a poll last June that revealed 48% of Americans want abortion legal with limits and another 32% said it should be completely legal, while 19% believe it should be illegal.

Polling in March by the Pew Research Center also uncovered nuances in the public’s attitude about abortion rights.

The poll found that nearly one in five U.S. adults (19%) believe abortion should be legal in all cases, with no exceptions. Fewer (8%) said abortion should be illegal in every case, without exception. By contrast, the vast majority — 71% — either said it should be mostly legal or mostly illegal. This majority group also said there are exceptions to their blanket support for, or opposition to, legal abortion.