LOS ANGELES - The South Central Neighborhood Council held a community forum Monday to ask members of the Los Angeles Police Department about their decision to detonate thousands of illegal fireworks in their neighborhood, and to demand accountability from the LAPD.

The South Central Neighborhood Council held a community forum Monday to ask members of the LAPD about their decision to detonate thousands of illegal fireworks in their neighborhood, and to demand accountability from LAPD.

The explosion happened on June 30 after LAPD seized illegal fireworks from a resident. LAPD officials believed the fireworks were too dangerous to transport, and said the explosion was the result of a catastrophic failure in what was supposed to be a blast-resistant container used by bomb squads worldwide. Bomb technicians placed 10 pounds of homemade fireworks that were seized from someone’s home inside the container, along with 5,000 pounds of what are considered over-the-counter fireworks. However, the over-the-counter fireworks contained a powder that LAPD said made them too dangerous to transport.

"The focus of today's forum is on the decision to detonate explosives in the middle of a community and to really understand the rights of the victims that were impacted by the decision," said the moderator of the forum.

The forum included members from the LAPD Newton Station, LAPD Bomb Squad, ATF, Councilmember Curren Price, and the Chief Investigator for the City Claims Division. Members  of the LAPD offered apologies at the forum saying they "wish it never happened."

Clashes broke out between LAPD supporters and residents of the South LA community. There was another boiling point when community members asked the LAPD representatives to provide the name of the person who made the decision to detonate the fireworks in the community. LAPD did not provide the name saying it is part of the investigation and they need to gather all of the facts. 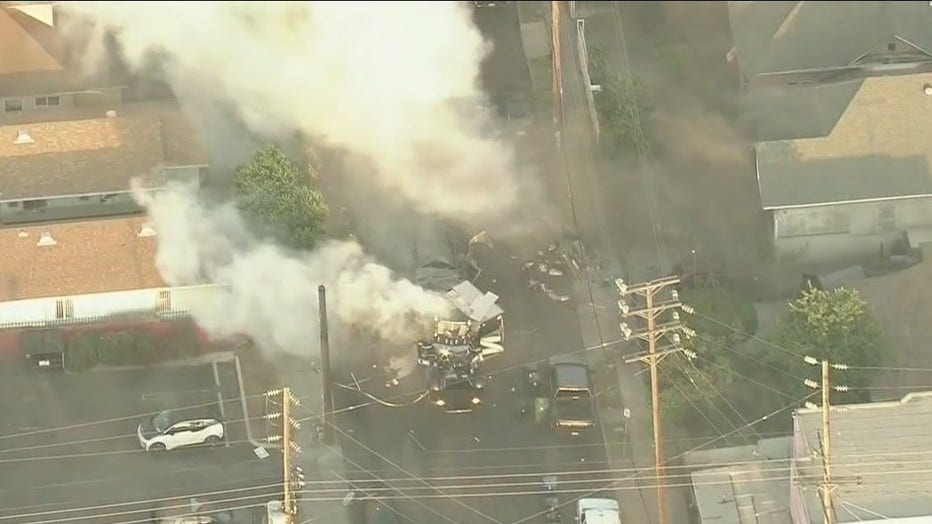 "We [city council office] were not consulted nor informed [prior to the detonation of fireworks] and had we been, it would not have occurred, that's for sure. Like you, I'm outraged. I'm outraged that something like this would occur in our community,"  he said.

"I've also spoken directly with our District Attorney, George Gascon, and he has also agreed to investigate this matter," said Price.

Price said anyone who was impacted by the explosion and needs assistance can contact his office at 323-846-2651.

"There has to be accountability just like the guy [Arturo Ceja III] who was selling fireworks. He went to jail. He went to court.  He will face the law. You [LAPD] have to face  the law as well. They [LAPD] thought it's  just South Central. It's just a bunch of Black and brown people,  they're not going to say or do anything. They f***** up. Yes, we are," he said.

Seventeen people were hurt in the explosion, including nine LAPD officers, an ATF agent, a television news photographer and several residents. The ages of the victims range from their 40s to their 80s, officials said.