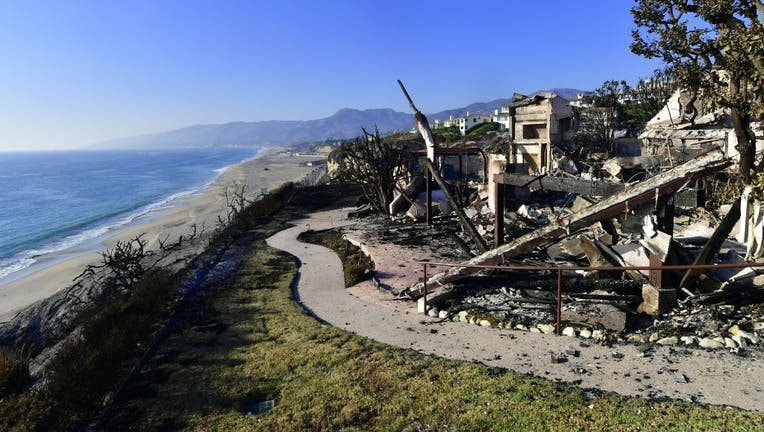 This photo shows the remains of a beachside luxury home along the Pacific Coast Highway community of Point Dume in Malibu, California, on November 11, 2018, as the Woolsey Fire continued to burn. (Photo by Frederic J. BROWN / AFP) (Photo credit shoul (Getty Images)

LOS ANGELES - Southern California Edison has agreed to pay $2.2 billion to a group of insurance companies representing most of the claims from the 2018 Woosley fire, officials announced Monday.

The final settlement with over 100 plaintiffs was reached on January 22, 2021, following a successful mediation. The agreement also requires SCE to reimburse the subrogation claim holders a percentage for future payments up to an agreed cap.

"I believe this subrogation settlement will lead to a global settlement protocol in Woolsey, between SCE and individuals," said Craig S. Simon of Berger Kahn, who served as Co-Lead Counsel for the subrogation plaintiffs.

The Woolsey Fire ignited on Nov. 8, 2018, and burned 96,949 acres of land. The fire destroyed 1,643 structures, killed three people, and prompted the evacuation of more than 295,000 Los Angeles and Ventura County residents.