YOSEMITE NATIONAL PARK, Calif. - It was a snowy scene at Yosemite National Park over the weekend, a welcome relief following months of dry weather and a destructive wildfire.

Park officials shared video of snow-dusted Yosemite Valley on Sunday as crews were still battling the Creek Fire in Fresno and Madera counties. It’s the first snowfall since the blaze ignited on Sept. 4. 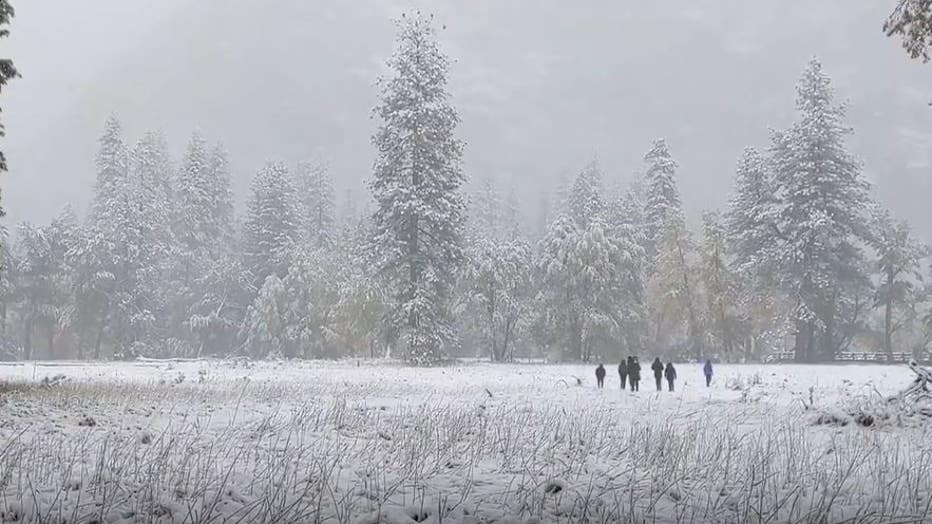 Snow fell at Yosemite National Park on Sunday for the first time since the Creek Fire ignited on Sept. 4. (Photo: Storyful)

On Twitter, the Sierra National Forest shared beautiful photos of what the snowfall looked like from a reconnaissance flight of the Creek Fire, writing that the storm brought just a dusting but “definitely helped mellow fire behavior in that neck of the woods.”

As of Monday morning, the Creek Fire had burned 379,729 acres and is 70 percent contained.

The cold snap brought chilly temperatures, rain and snow to much of the Golden State after months of scorching hot weather fueled historic wildfires. But despite the weather shift, it's still wildfire season in California.

The forecast for the coming week is cold but dry with a system expected to bring rain and snow at the end of the week.

Yosemite officials closed Tioga and Glacier Point roads ahead of the storm. They will be evaluating conditions Monday before reopening. For the latest road updates, call 209-372-0200.