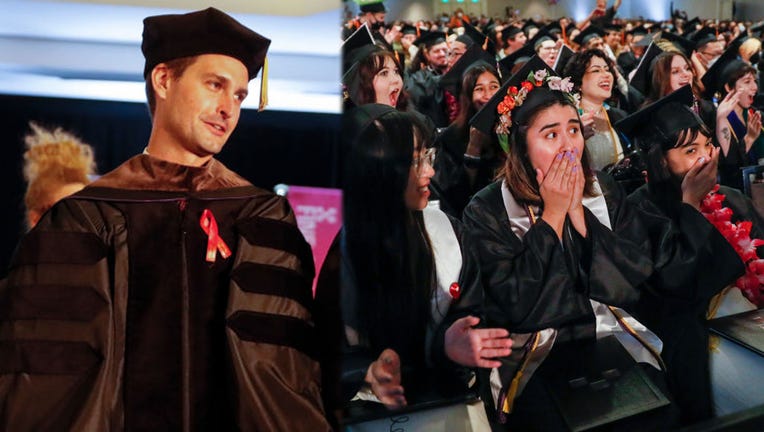 (L) Snapchat co-founder Evan Spiegel receives an honorary Doctorate as does his wife Miranda Kerr at the Otis College of Art and Design commencement ceremonies where graduating students learned that Spiegel has paid for their tuition, making them stu

LOS ANGELES - Snap CEO and co-founder Evan Spiegel is handing out the ultimate graduation gift to the 285 graduates of Otis College of Art and Design in Los Angeles.

The nonprofit institution — located in the Westchester area of Los Angeles near LAX — said in an announcement on Sunday that Spiegel, along with his wife, KORA Organics CEO Miranda Kerr, made a hefty donation that the school says will pay off all the Class of 2022's student loan debt.

"Otis College is incredibly grateful for this historic gift from Miranda Kerr and Evan Spiegel, which will be life-changing for the Class of 2022 and their families," said Charles Hirschhorn, President of Otis College of Art and Design. "Student debt weighs heavily on our diverse and talented graduates. We hope this donation will provide much-deserved relief and empower them to pursue their aspirations and careers, pay this generosity forward, and become the next leaders of our community."

Added Spiegel and Kerr: "Otis College of Art and Design is an extraordinary institution that encourages young creatives to find their artistic voices and thrive in a variety of industries and careers."

"It is a privilege for our family to give back and support the Class of 2022, and we hope this gift will empower graduates to pursue their passions, contribute to the world, and inspire humanity for years to come," the philanthropic pair maintained.

While the amount of Spiegel and Kerr's donation was not disclosed, Otis College said the gesture tops its largest offering, surpassing the previous record of $10 million. The generous gift was made through the Spiegel Family Fund.

Spiegel had attended summer classes at Otis during high school before he embarked on his higher education endeavors at Stanford University where he created the social media app with two former Cardinal classmates.

Snapchat co-founder Evan Spiegel receives an honorary Doctorate as does his wife Miranda Kerr at the Otis College of Art and Design commencement ceremonies where graduating students learned that Spiegel has paid for their tuition, making them student debt free. Yaritza Velazquez-Medina, center, weeps as students learn they no longer have college sponsored debt. (Robert Gauthier/Los Angeles Times via Getty Images)

"It changed my life and made me feel at home," Spiegel told the graduating class, according to the Los Angeles Times. "I felt pushed and challenged to grow surrounded by super talented artists and designers, and we were all in it together."

"I am not considering $50,000 debt reduction, but I am in the process of taking a hard look at whether or not there will be additional debt forgiveness," Biden said.

Who qualifies for student loan forgiveness under the new changes?

During his presidential campaign, Biden supported erasing $10,000 in student debt for most borrowers, but has raised questions about his legal authority to do so via executive order. During a press briefing last week, press secretary Jen Psaki said an income cap for student loan forgiveness was under consideration.

Biden has extended the freeze on student loan payments through Aug. 31, citing the COVID-19 pandemic.

Meanwhile, more than 43 million Americans owe the federal government $1.6 trillion — an average $37,000 per person — making up the biggest share of consumer debt in the U.S. after mortgages, the Times reported.