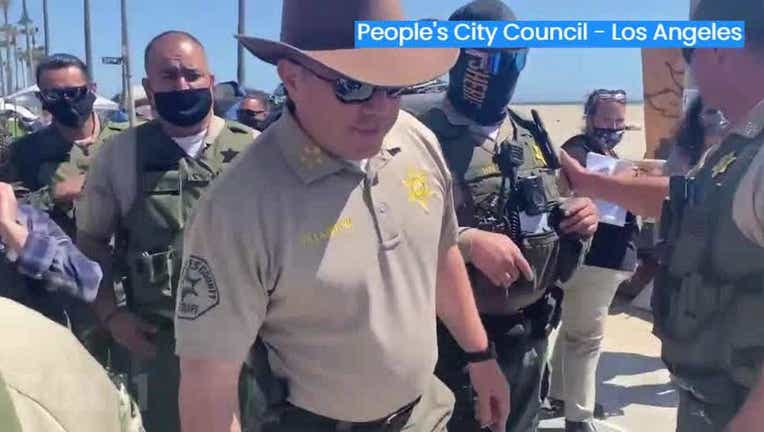 LOS ANGELES - Los Angeles County Sheriff Alex Villanueva says the people are "tired of being tired" about the homeless crisis.

In his personal blog page, Villanueva said he wrote to the county's Board of Supervisors urging them to declare a local state of emergency on the region's homeless crisis. He said the county leaders responded to his request that the county council claims it "already have ‘robust’ programs in place."

June 2021: Villanueva urging county board of supervisors to declare a state of emergency

Homeless Crisis: LA Sheriff Villanueva urging county board of supervisors to declare a state of emergency

The homeless crisis in Los Angeles County continues to worsen, especially in the hard hit area of Venice Beach.

Villanueva argued in a blog post that the city and county's "same failed policies" are not going to yield a different result in alleviating the homelessness problem.

"LA County is failing at reducing homelessness and helping those who desperately need help. Despite spending more than $6.5 billion over the last 10 years to address the issue, the homeless problem has grown by over 100%, from 39,000 in 2011 to over 80,000 in 2021," he said, in part. "Having the state throw another $12 billion at the failed plan is the same problem on a whole new scale of futility."

The Los Angeles County Sheriff suggested that treating the "homeless crisis like the emergency that it is," and putting a stop to "endless studies and blue-ribbon commissions" are steps the county should take.

"Like any emergency where the resources are dwarfed by the sheer size of the need, triaging is a particularly important function. But triage cannot be the only strategy, which it appears to be along with another failed approach of building permanent housing, the favorite of the for-profit developers," he said in the blog post.

Another option Villanueva suggested in his blog was the county should consider developing safe campsites and RV parking.

"It can be as simple as telling people to move on if they reject the other options, and then use appropriate enforcement of local laws to address those who refuse to leave," he said in his blog. "Bottom line is no one has the right to occupy and despoil public space for their own personal use and at great public expense."

He also adds it is important to brainstorm ways to provide bed space for those battling mental illnesses.

Earlier in the summer, Villanueva was heckled by the public during LASD's patrol of the Venice boardwalk.

Both Villanueva and Los Angeles city mayor Eric Garcetti have butted heads for months when it comes to responding to the homeless crisis in beachside communities. The Los Angeles County Sheriff has been critical of the city's response to Venice Beach's homeless problem.

Garcetti, on the other hand, dismissed Villanueva's criticism, adding the mayor will not get into a "pissing match" with how the homeless problem should be handled.

Garcetti tours Venice, says he won't get into 'pissing match' with Villanueva

Los Angeles Mayor Eric Garcetti toured Venice on Tuesday amid an ongoing political battle about how to best address the homeless crisis plaguing the beachside community.