Following President Joe Biden’s remarks on the deadly suicide bombings at the Kabul airport on Thursday, Sen. Marsha Blackburn, R-Tenn., gave her reaction to the president’s statements, saying he lacked transparency and did not give Americans what they wanted.

"While he had a few appropriate things to say, what he did not lay out was a plan of action of how we move forward. He continued to place blame," Blackburn said during an interview with LiveNOW on Thursday.

"He is not being transparent with the American people, indeed, I’m not sure that anybody in his national security team is choosing to be appropriately transparent," Blackburn continued. "People are so stressed about this and we all grieve for those families, those service members that were killed today, that lost their life in the line of duty for others who may have been injured. I know we’ll find out more. As we go through the coming hours."

The senator from Tennessee also noted that while Biden’s remarks on hunting down the assailants and making them pay were appropriate, she believed the president should have also laid out a plan of action for the American people. 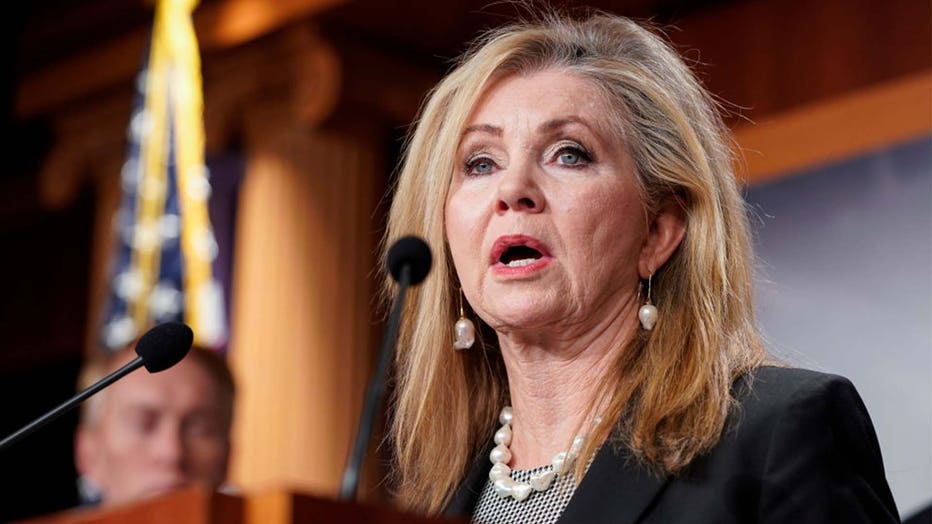 FILE - Senator Marsha Blackburn, R-Tenn., speaks about her opposition to S. 1, the "For The People Act" on June 17, 2021 in Washington, DC. (Joshua Roberts/Getty Images)

"But there should have been a plan and while he says, ‘We will hunt you down and you will pay,’ and that is appropriate, and indeed we should, there was not a plan of action of how we’re going to get these troops that are on the ground out safely after we get every American and our partners, our Afghan partners, out of there," Blackburn said.

Blackburn also said that she would be agreeable to an internal investigation into Biden’s handling of the Afghanistan situation, saying that this recent blunder makes the president "look weak."

"This is one of those things, leaders are strong, they make decisions, leaders are competent, leaders know how to implement their decisions. They go about their work trying to right wrongs. They’re compassionate, they’re forward-thinking, and what we are seeing is someone who is a leader in title, but not in action and it’s perceived as being very weak, very vulnerable in that weakness, that this causes our nation to appear to be weak, because of the leadership team that is around a weak president," Blackburn said.

Blackburn, along with a long list of GOP politicians called for Biden to either be impeached or resign from office after the deadly attacks near Harmid Karzai International Airport earlier on Thursday.

RELATED: ‘We will hunt you down and make you pay’ Biden says after Kabul airport suicide attacks

Meanwhile, Biden said on Thursday that his administration plans to complete the evacuation of American citizens and others from Afghanistan despite the deadly bombings.

Speaking with emotion from the White House, Biden said the Islamic State group's Afghanistan affiliate was to blame for the attacks that killed 12 American service members and many more Afghan civilians. He said there was no evidence they colluded with the Taliban, who now control the country.

"We have some reason to believe we know who they are," he said of the bombers and gunmen involved. "Not certain."

RELATED: ISIS-K: What to know about Taliban rival seen as threat to Afghanistan evacuation

As many as 1,000 Americans and many more Afghans are still struggling to get out of Kabul.

The administration has been widely blamed for a chaotic and deadly evacuation that began in earnest only after the collapse of the U.S.-backed Afghan government and the Taliban's takeover of the country. More than 100,000 people have been evacuated so far.

Thursday's attacks were sure to intensify political pressure from all sides on Biden, who already was under heavy criticism for not beginning the pullout earlier. He had announced in April that he was ending the U.S. war and would have all forces out by September.

The Associated Press and Austin Williams contributed to this report.