SAG-AFTRA calls for production hold due to COVID-19 surge

LOS ANGELES - The anticipated post-holiday surge of COVID-19 cases and the shortage of hospital beds to treat patients has led organizations representing actors, independent producers and advertisers to recommend a temporary hold on in-person production in Southern California.

The recommendation was announced Monday in a joint statement by SAG- AFTRA, the Joint Policy Committee that represents commercial advertisers and ad agencies and the Producers Guild of America.

"Southern California hospitals are facing a crisis the likes of which we have never seen before," said SAG-AFTRA President Gabrielle Carteris. "Patients are dying in ambulances waiting for treatment because hospital emergency rooms are overwhelmed.  This is not a safe environment for in-person production right now."

While the industry has safety protocols to mitigate the risks of acquiring COVID-19 on sets, production has other risks, including stunt accidents and equipment failure, said David White, SAG-AFTRA's National Executive Director.

"Right now, with few if any hospital beds available, it is hard to understand how a worker injured on set is supposed to seek treatment."

The statement urges SAG-AFTRA members to stay home and not accept on-set employment for the next several weeks. If they are required to work during that time and are concerned about their safety, they should contact the union.

"Commercial producers are strongly encouraged to reschedule their Southern California-area productions to a later date when the hospital capacity crisis has eased, '' said Stacy Marcus, chief negotiator for the JPC. "It is simply too great a risk to performers, crew, and industry personnel to continue production knowing that hospitals are in crisis mode and the number of cases continues to rise." 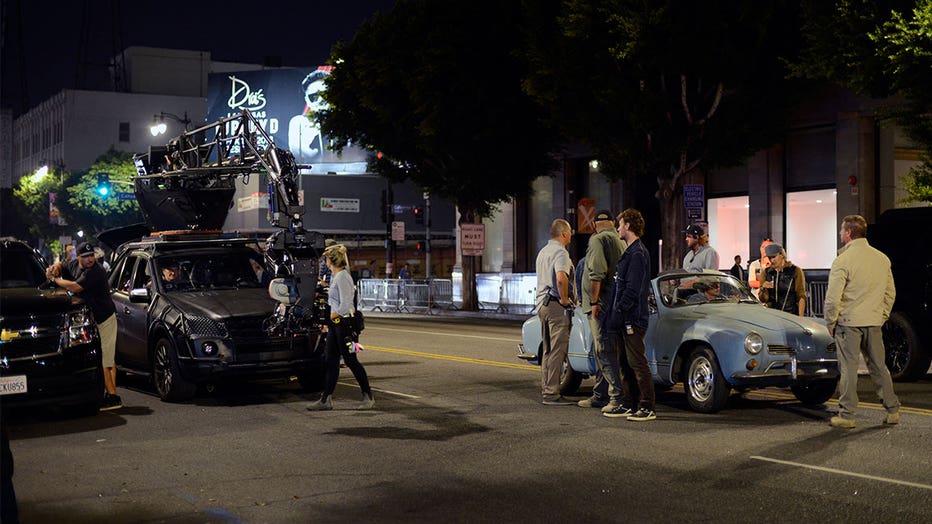 Actor Brad Pitt driving a vintage Volkswagen while filming "Once Upon A Time In Hollywood" on Hollywood Boulevard on October 22, 2018 in Los Angeles, California. (Photo by Stephen Albanese/Michael Ochs Archives/Getty Images) (Getty Images)

The Producers Guild of America issued its own statement urging members to delay production. "Independent producers can help hold the line in this crisis by taking the difficult but responsible step of postponing production for now. We can and will do what it takes to protect our cast and crew, and our community," said Gail Berman and Lucy Fisher, PGA's Presidents.

Major studios and streamers were already on production hiatus in Southern California until mid-January.

The temporary hold comes on the heels of a recent notice from the Los Angeles County Department of Public Health asking film industry members to be cautious and "strongly consider pausing work for a few weeks during this catastrophic surge in COVID cases."