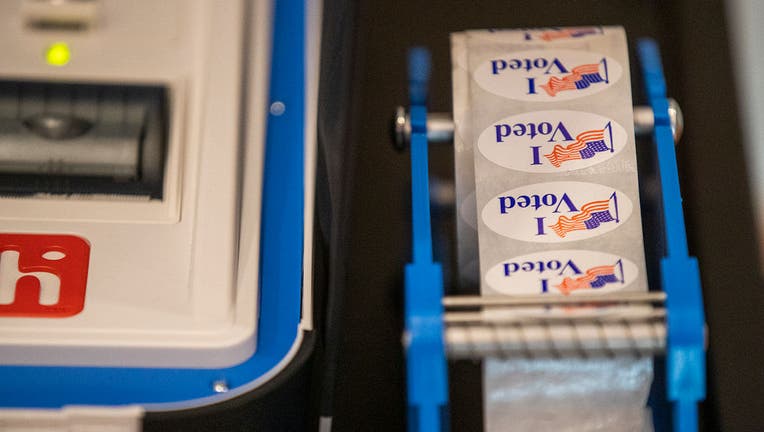 LOS ANGELES - Voters were lining up Saturday at more than 100 vote centers across Los Angeles County and one in Orange County, as a concerted effort to encourage residents to cast their ballots early for the November presidential election intensified.

Saturday is being designated nationally as "Vote Early Day 2020'' in a campaign promoted by a collection of businesses, nonprofit organizations, multimedia companies and election administrators, including California Secretary of State Alex Padilla.

The effort coincides with the opening of the vote centers, which will be available through election day on Nov. 3. Any registered voter in Los Angeles County can cast a ballot at any county vote center, regardless of location and the voter's home address.

First round of early voting kicks off

We're just days away from the 2020 election and several vote centers in Los Angeles County are opening up early for residents to cast their ballot.

Election officials hope the availability of vote centers will encourage people to cast their ballots early, reducing the possibility of long lines at polling places on election day.

Although every registered voter in California was sent a vote-by-mail ballot, residents have the option of casting a ballot in person at the centers.

Voters who have already filled out their vote-by-mail ballot can also drop them
off at the vote centers.

• The Forum in Inglewood to serve as vote center for 2020 election, Clippers announce

• Universal CityWalk to serve as vote center for November election

Another 650 vote centers will open Oct. 30 throughout the county, and will also remain open through election day.

An interactive map showing the locations of all vote centers is available at www.lavote.net.

According to the Los Angeles County Registrar-Recorder/County Clerk's Office, a tally of all vote-by-mail ballots -- including those deposited in drop boxes -- received prior to election day will be released within 30 minutes of the polls closing at 8 p.m. on Nov. 3. A short time later, a tally will be released of all in-person ballots cast at vote centers ahead of Nov. 3.

The rest of election night will be tallies of ballots cast on election day.

However, the shift to regional voting centers instead of local precincts means it will be more difficult for the public and media outlets to track what percentage of votes have been counted on election night and how many remain to be tallied.

The previous precinct model allowed observers to track the percentage of precincts that have had their ballots counted -- giving an idea of how many votes still needed to be counted. But the new vote center system means it won't
be known how many additional ballots are yet to be counted at any point on
election night.

During the March primary, voters at some vote center locations faced long lines that forced centers to stay open beyond 8 p.m. While a big push to vote by mail is expected to alleviate some of the demand, Los Angeles County has also upgraded technology in an effort to eliminate bottlenecks that slowed the process in March, such as a slow voter check-in procedure. County employees
have also been called into service to staff voting centers, rather than relying
solely on volunteers to manage the process.

However, some lines at vote centers may be inevitable, and the county has developed online and mobile technology to allow voters to check wait times
at various locations and choose the fastest option.

But even after the polls close, it will be weeks before final election results are actually known. A new state law requires ballots postmarked by Election Day but not received until as much as 17 days later to be included in the vote totals. After the polls close, officials will also be tasked with sorting through provisional or questioned ballots submitted on election day that must be verified.

L.A. County election officials will release updated vote tallies twice a week, on Tuesdays and Fridays, until all ballots are counted.