FOX 11 looks back on Whitney Houston's death in Beverly Hills as we approach 10 years since the world said goodbye to the pop icon.

Her death was heartbreaking to the world but to those who knew her well, it wasn’t entirely shocking.

"It was a slow-moving accident and you saw it, I saw it up close and personal that this isn't going to end well," says Journalist Allison Samuels.

Samuels began interviewing Whitney at the beginning of her career.

At the time, there were very few Black journalists working for large magazines like Newsweek.

Allison says she and Whitney hit it off and through the years, they remained friends.

"I feel her death the most because I felt like it's so preventable," says Samuels.

Winter says,  "When someone that talented dies, it’s like, ‘Why?" 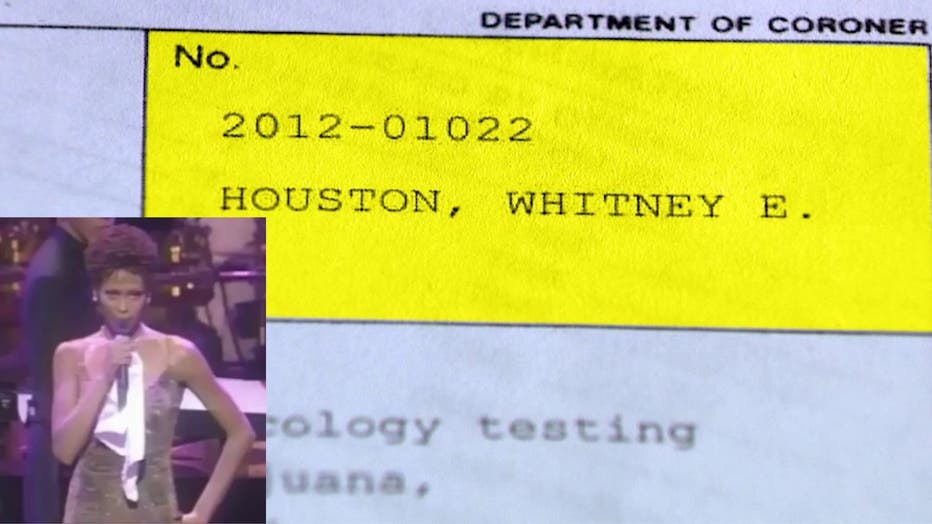 The day Whitney died in a bathtub; Ed got the call to immediately head to the Beverly Hilton Hotel. He would be the one in charge of overseeing the investigation into her death. He remembers walking into room 434.

Winter says, "I observed the furniture had been moved. There was a sheet laying over a body which, Whitney Houston’s body was underneath. The bathroom was a little disheveled. There was residue on a mirror and some powder on a nightstand."

The toxicology report indicated Whitney had atherosclerotic heart disease. She had cocaine, benzoylecgonine, marijuana, Xanax, Flexeril and Benadryl in her system.

Winter says, "The official cause of death was drowning, heart attack and cocaine."

On February 11, 2012 at 3:55 p.m., Whitney Houston was pronounced dead. The autopsy report states Whitney had a long history of substance abuse. The excessive cocaine use rotted her posterior nasal septum.

Samuels says she first noticed Whitney had a problem around the time the movie, Waiting to Exhale had been released. It was also a tumultuous time for Whitney because a special person in her life had walked out.

Samuels says, "After Robin left, [Whitney] was more erratic, more all over the place. The last time I interviewed her, it was clear she was high."

In Part I of our look back at Whitney’s life, we learn more about Robin Crawford, Whitney’s longtime friend and rumored lover. We also hear from Saxophonist Kirk Whalum who toured with Whitney and bodyguard David Roberts who warned Whitney’s representatives she needed help.

"We are all at fault, we all should have done the right thing, we didn’t," he said.