LOS ANGELES - A man suspected of driving under the influence led police on a brief pursuit before it came to a violent end in Hollywood early Tuesday morning, officials said.

It all started just before 2:25 a.m. when patrol officers with the Los Angeles Police Department spotted a green Dodge Challenger on Gower Street and Afton Place and believed the driver was under the influence. Officers attempted to pull him over but the suspect did not want to stop and led authorities on a pursuit that lasted for approximately two minutes.

The speeding Challenger slammed into at least two vehicles on Sunset Boulevard and Van Ness Avenue. Police said the suspect and the passenger refused to get out of the vehicle and for an estimated 40 minutes, the primary suspect was seen taunting officers and making obscene gestures while appearing to frantically search for something in the vehicle.

Paramedics were called to the scene to treat the two innocent victims.

Meanwhile, the suspect continued to be combative toward LAPD officers and paramedics, even though he appeared to be injured. 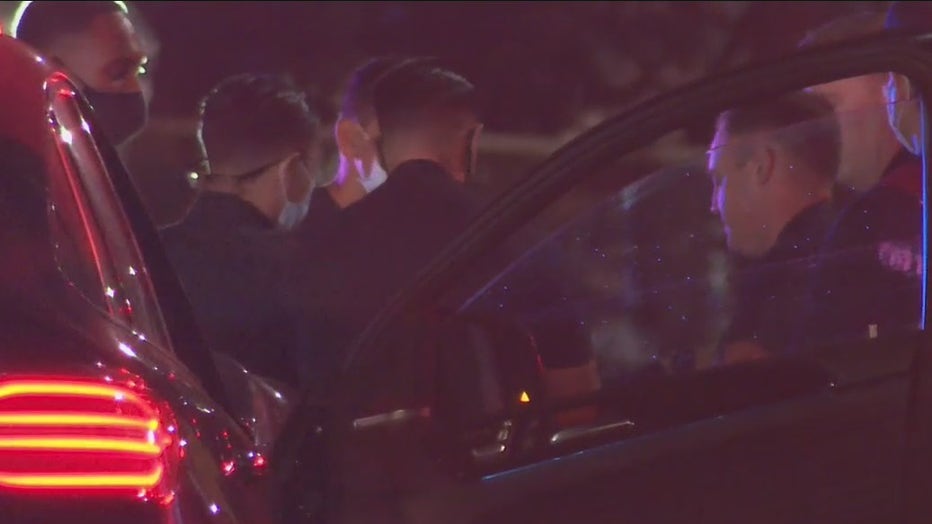 LAPD later confirmed the Challenger was stolen and the suspect was eventually taken into custody.

Anyone with information is asked to contact the LAPD Hollywood Station.