Andrew Schumacher went to Matsuhisa in Beverly Hills on March 11 to celebrate his 21st birthday with his brother, Paul Jr., and a few of his friends, when they were seated at the table next to the 9-time Grammy-nominated rap artist.

Andrew's mother, Nicole, told FOX 11 that another table sent a bottle of sake over to the rapper's table, adding that "he was so kind and walked over to thank them and then walked over to our table."

"He was so incredibly kind and patient with our son who has autism. Andrew has a hard time speaking and Austin was so natural and sweet with him," Nicole told FOX 11.

"Nice to meet you," Post Malone said to Andrew in the video, before thanking him for being a fan.

Post Malone is going viral after he made a young fan's 21st birthday in Los Angeles extra special.

Andrew's mother told Post Malone that Andrew is celebrating his 21st birthday, "he drank his first beer tonight," she said.

"Ya? What kind of beer you get? That’s a tough choice. Not for me but…," Post Malone said as the group laughed.

"He has autism and knows all of your songs," Andrew's mother told the rap artist.

"Dude, thank you for listening," Post Malone replied. "That’s so sweet and nice to meet you."

"Have fun dude, but not too much fun," the rapper said.

Nicole said that when Post Malone walked into the restaurant, she asked her son if he knew who he was, Andrew replied saying "Austin," referring to Post Malone's real name, Austin Richard Post.

"I wasn't sure if that was his real name until he walked over to our table to introduce himself," she said.

Andrew's mom said he always draws pictures of his "friends" and this was his most recent drawing. 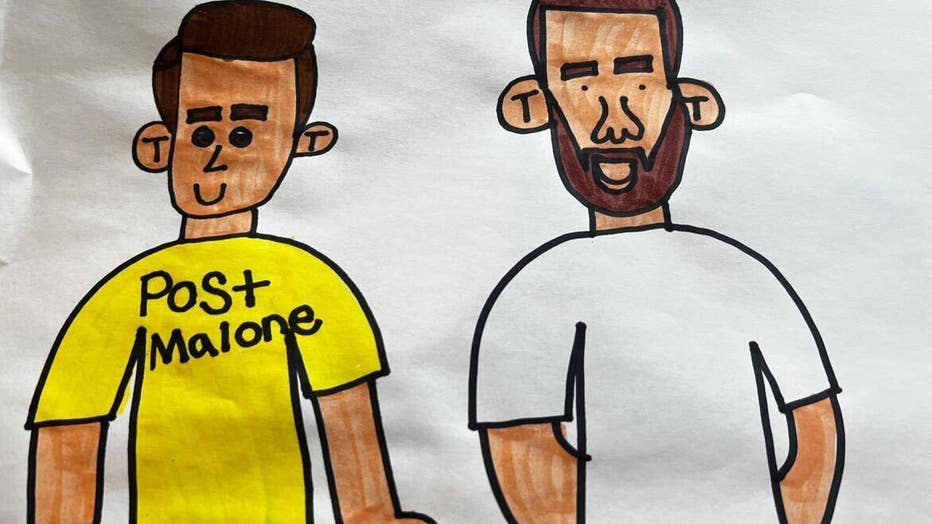