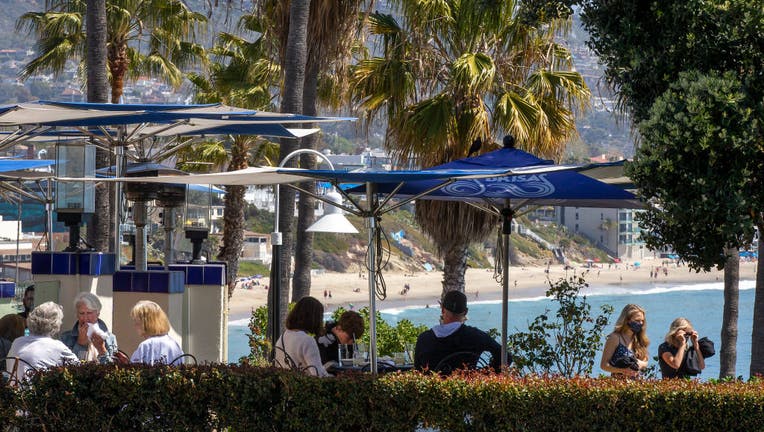 SANTA ANA, Calif. - Orange County officials are reassuring the public they will not issue any mandates regarding access to public or private places depending on a resident's vaccine status, but said they're working on a program to provide digital proof of inoculation if a vaccine recipient wishes to have it.

County supervisors said their offices have been inundated with calls from concerned residents, and 179 speakers signed up to make comments to the board at its regularly scheduled meeting Tuesday. Most of the comments decried any vaccine verification program, with some incorrectly conflating it with efforts to ban the unvaccinated from events or businesses, and some commentators even making Nazi Germany comparisons.

Dr. Clayton Chau, the county's chief public health officer and director of the Orange County Health Care Agency, told the supervisors that the Othena app and website prematurely featured a Quick Response, or QR, code, to verify vaccines digitally but that it was not active and would soon be removed until the pilot program is ready to launch.

"It is not active, it doesn't work,'' Chau said. "The reason it is there is because it is a prototype ... We're planning on piloting it for businesses that require it."

Board Chairman Andrew Do said the use of the term "vaccine passport" was "inartful.'' He added that officials had not anticipated that it would have connotations of "exclusionary functions."

Do and Supervisor Don Wagner earlier issued a statement saying they any government mandates regarding access based on immunization. But Do said he supported the proposal for a vaccine verification "as an administrative tool to show proof of immunization" when a vaccine recipient at a county-run site needs or wants one.

Chau added that as a "health entity we are obligated by law to give people proof they have received services from us."

State officials have said they will not issue vaccine verification, but counties that run vaccine distribution sites must do so, Chau said.

Orange County CEO Frank Kim noted that the request for digital proof of inoculation would be entirely voluntary.

"On the app itself if you want a digital record you received a vaccination through the county you will have a button you will push and once you push the button it will provide you with a QR code," Kim said.

RELATED: FOX 11's Vaccine Finder: Everything you need to know about booking your vaccine appointment

Chau said businesses have "every right to do whatever they want to do to make their environment safe," but the government cannot prohibit someone from a public place with or without a vaccination.

Wagner questioned why a digital record is necessary when vaccine recipients receive a CDC card upon inoculation. Chau said some people are selling the cards to be used for forgeries and the digital record is more secure and reliable.

Supervisor Katrina Foley said she was "concerned we have a small minority of individuals who have been calling our offices all day yesterday," and that most of the county has either gotten inoculated or supports vaccines.

When Foley asked Chau how secure the information in Othena is, Chau said it is stored in the Google cloud, which is the same place favored by the U.S. Department of Justice.

"The QR code is much safer than any other form or letter,'' Chau said.

Supervisor Doug Chaffee said as the representative of the homes of the Anaheim Ducks, Los Angeles Angels, Disneyland and Knott's Berry Farm, a vaccine verification system is "very important in the travel industry and entertainment industries ... Not having this ability is going to affect their reopening."

Supervisors were discussing adding $3.8 million to their contract with Composite Apps Inc., the developer of the Othena app, to provide a variety of new services, including digital proof of an inoculation at a county-run site, Kim said.

"Americans, by and large, chafe at the idea of showing papers," Noymer said. "We kind of recoil at this, so it's smart to not use the word 'passport,' but at the same time some of the same people who chafe at the idea of passports want this verification so it's a smart move on their part."

As for whether some businesses will require customers to be vaccinated, Noymer said they do so at their own peril.

"If they're going to lose 45% of their customers watch them change back quicker than you can say Huntington Beach," Noymer said.

Businesses can deny service to anyone -- short of a protected class as spelled out by the law -- and "customers are free to get (angry) about it," Noymer said. "It will be interesting to see how it plays out."

Meanwhile, the weekly update from the state, issued on Tuesdays, the county's test positivity rate remained at 1.6%, while the adjusted case rate per 100,000 people on a seven-day average with a seven-day lag remained at 3.

The county's Health Equity Quartile rate, which measures positivity in hotspots in disadvantaged communities, improved from 2.1% to 1.8%. The county's positivity rates qualify for the least-restrictive yellow tier of the state's four-tier system for reopening the economy, but the case counts are still in the orange tier.

A graduation into the yellow tier requires that the case rate must get below 2 per 100,000 population.

With Tuesday's fatalities, the death toll for March rose to 150. There have been no fatalities reported in April, but COVID-19 fatalities are often staggered or delayed in reporting for a variety of reasons.

Hospitalizations declined from 120 on Monday to 115 on Tuesday with the number of intensive care unit patients increasing from 29 to 31. The county has 35.5% of its ICU beds available, and 71% of its ventilators.

The county announced it will close its large testing sites at the OC Fair & Event Center and Anaheim Convention Center on April 30. Kim said demand at the testing sites has dropped off in favor of the at-home mail kits.