On the frontlines of war

LOS ANGELES - Going into its fourth week, the war between Armenia and Azerbaijan continues. Giving people a front seat to the brutal pandemic-era war is British journalist and self-funded filmmaker Emile Ghessen.

Armenia says more than 830 of its soldiers have been killed so far. Azerbaijan is keeping the number of soldiers it has lost a secret. 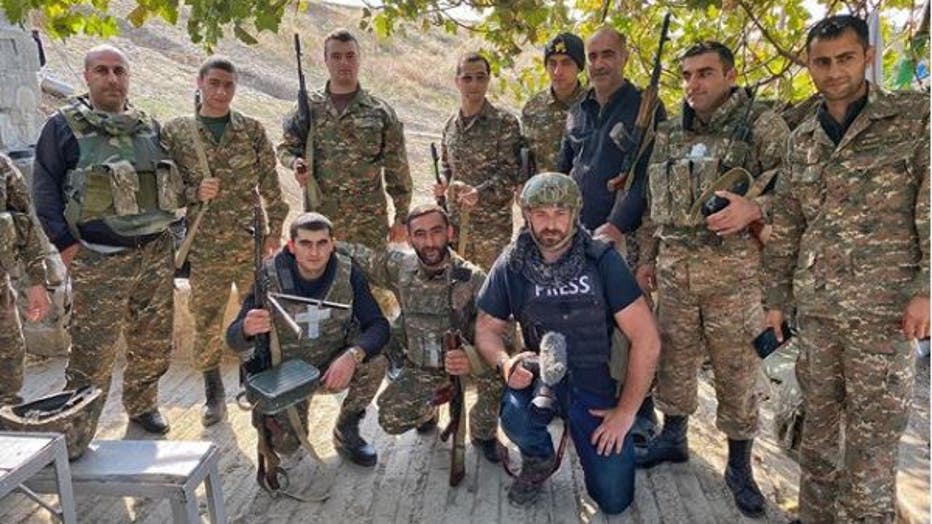 Ghessen plans to make a documentary and was given a limited pass, and once that pass expired he had to leave. His wish is to be embedded in Artsakh for a month at least.

He wants to spend more time on the frontline with the soldiers to tell their stories and says he now needs funding to make that documentary.

Ghessen has also been documenting stories on his Instagram.

“Currently on the frontline-- as you see here, the trenches again are very much like when I was in Ukraine. The positions of the guys here. The drones are watching them. You can hear the shelling coming in”.

Ghessen is a former UK Marine who served in Afghanistan and Iraq. Now he’s a documentarian, a war correspondent and a storyteller.

“In Stepanakert, there’s a siren. If the anti-aircraft picks up a missile or a drone, the siren would go off. So in theory, you could go out and about during the day, and if you hear a siren you go in.”

British filmmaker Emile Ghessen sat down with FOX 11's Araksya Karapetyan in an extended interview to discuss his experience documenting the war in Artsakh between Armenia and Azerbaijan.

He’s seen war before, but he says this war is different.

“This is his first conventional war. Syria and Iraq were unconventional wars. Dynamics are different. You’re fighting country against country,” Ghessen stated.

“It’s not like me when I was in the military going to Afghanistan. We all volunteered to fight in another land. The people here are fighting for what they believe is their homeland, their own soil that their fathers and forefathers have lived and bled over. So it is very personal this war.”

What is also different is how this war is being fought.

“Azerbaijan using Turkish and Israeli drones is a game-changer. It is a massive game-changer. A psychological warfare used by the drone is the sense that all they need to do is fly the drone over once, twice, drop a few bombs, and the sound of the drone in the area just scares people. People just run for cover. So they are controlling and dominating people by a sound because they know it relates to dropping a bomb,” he described.

“One of the drones they have is a Kamikaze drone, it’s a drone that is actually a rocket. So it’ll fly around, look for its target, and once it’s located its target for a user miles away, it’ll nose dive like a Japanese Kamikaze.”

He says the drones being used have definitely changed warfare.

“I remember I was in the shower earlier, and heard a weird noise, I was like, a drone, in the city now, in Yerevan? And even me just being there, for eight days plays on your mind, so the civilians, so definitely, the drone has changed warfare.”

His stories on Instagram are getting a lot of attention. He’s showing his followers what it’s like on the frontlines. And he’s showing the human side of this story.

“It is quite emotional to see a grown man cry by putting their son in the ground, and watching this Armenian man kissing his son for the last time before the lid of the casket goes on and they put him into the ground. It was really moving.”

Ghessen says most of the women and children have fled Stepanakert, the capital of Artsakh. Those who have stayed behind are too sick or physically unable to travel.

"In the whole city, those were the only children I actually saw my whole time there. And the only reason they stayed behind is because their father is on the frontline and the mother is looking after her mother who is quite ill, she stayed to tend to her mother and her kids were there. It is heartbreaking to see these kids. You see one of the boys-- the kids are attractive kids-- they’ve got angelic faces and such. And it’s just, they’re just surrounded by war," Ghessen said.

Armenia is the first nation in the world to adopt Christianity as their religion. During the war a church and cultural center in Shushi were hit.

“The church in Shushi has been hit twice. I think it was about two weeks ago. It was struck on the side by a missile. And a lot of churchgoers and journalists went in, after two hours after it was hit, it was hit again in the same place. So me, knowing a bit about military stuff, that wasn’t a random attack. It was put in a plane or a rocket and hits the same hole, chances are it’s a planned-- targeted in my opinion.”

“Morale was high, especially among soldiers. Of course there’s people, the older generation that’s fed up, they’re tired, they’re scared, and they’re worried. They don’t know what’s going on, but the soldiers here are up for it.”

Locals tell him they are pinning their hope of salvation on Russia, because they say the rest of the world, including the United States, is being indifferent.

“That’s the thing with Azerbaijan and Turkey creating this war at the moment, the timing was perfect -- the world’s attention is elsewhere. You're consumed by COVID and U.S. elections. So if America, the most powerful country in the world, with the influence around the world is busy because there is an election coming up and COVID, they’re going to turn a blind eye. The media is not interested in what’s going on in a faraway land, in a place called Armenia and Azerbaijan where the majority of the people haven't heard of these countries or couldn’t even point it out on a map.”

Ghessen went on to say, “Turkey’s foreign policy has been getting more aggressive recently, with their intrusion into Syria, their funding and arming of Islamic State, also Free Syrian groups, their movement into Libya and now their movement into this region here. Very much people saying since the 2016 coup in Turkey, Erdogan is becoming more dominant with his foreign policy.”

His first documentary was about Kurdistan. He says he learned a lot.

Why didn’t he go to Baku, the Capital of Azerbaijan for this war? He says he didn’t have access to Baku and because of his history with Kurds it was safer for him to come to Armenia’s side.

“I don’t want to say this to be disrespectful to the Armenians, but they seem to be the underdog here. As one of the commanders was telling me Azerbaijan has loads of allies and we’re fighting alone here. Why are Armenians so alone in this battle, and what are they doing about it,” Ghessen exclaimed.