The search continues for the suspect who gunned down an off-duty Monterey Park police officer Monday in a gym parking lot.

DOWNEY, Calif. - An off-duty officer with the Monterey Park Police Department was gunned down in broad daylight in a busy parking lot just steps away from the entrance of LA Fitness in Downey, officials said.

Around 3:45 p.m. Monday, the Downey Police Department responded to a call outside the gym in a busy shopping center located in the 12000 block of Lakewood Boulevard. SkyFOX was over the scene as parts of the parking lot were closed off due to the investigation.

Investigators said the officer - identified as 26-year-old Gardiel Solorio of Bell Gardens - was shot multiple times while sitting in his car. Security footage shows at one point, Solorio's vehicle went backward about 25 feet and slammed into a parked van, possibly as a way to escape the gunfire. 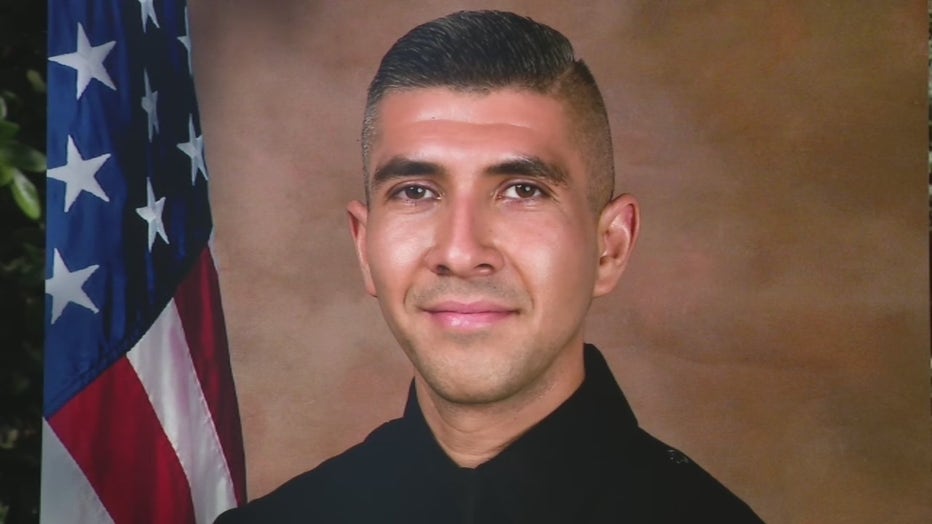 "We all knew from the moment we met him that he had the heart of service and was going to be a great officer," MPPD Chief Kelly Gordon said. "And I could tell that from the moment he walked in and did our first introductions in my office. The family and department are grieving right now, and this is an especially difficult tragedy. It's a senseless act of violence. He was only 26 years old. I don't know about all of you, but I have children that age. So to me this is particularly difficult."

Friends of Solorio said he dreamed of being a policeman since he was a child.

"He was living his dream. Why would someone kill him outside the gym?" a friend said.

Investigators said the officer - identified as 26-year-old Gardiel Solorio of Bell Gardens - was shot multiple times while sitting in his car. Security footage shows at one point, Solorio's vehicle went backward about 25 feet and slammed into a parked van, possibly as a way to escape the gunfire.

At this stage of the investigation, it’s unclear if the suspect knew if the victim was a police officer. A description of the suspect was not available and investigators believe there may be more than one shooter.

Authorities said there are multiple avenues of the investigation, including the possibility of this being a carjacking/robbery attempt or a possible road rage incident.

Off-duty cop killed outside a gym in Downey

A community is in mourning after an off-duty Monterey Park police officer was shot and killed outside an LA Fitness in Downey.

A procession was held Monday night as Solorio's body was transported from the crime scene to the LA County coroner's office.

Solorio is survived by his parents, brothers, sisters and fiancée. His family has started a GoFundMe to help pay for funeral expenses.

Anyone with information is asked to contact Downey PD.