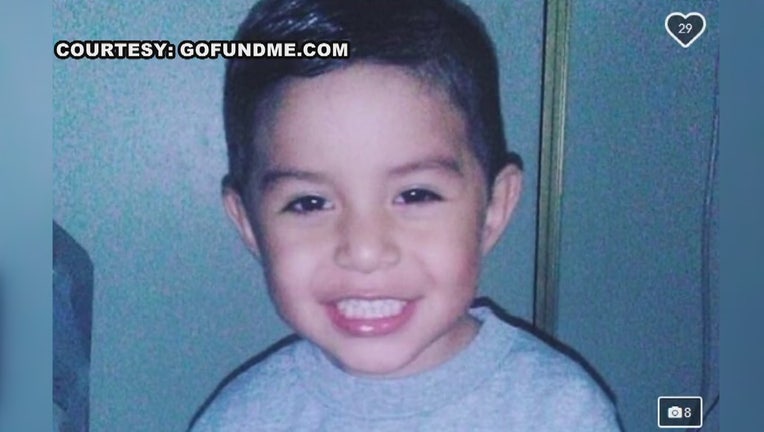 Photo of Noah Cuatro, the 4-year-old Palmdale boy was allegedly killed by his parents, who initially reported that he drowned in the pool on July 5, 2019. A grand jury later indicted Jose Maria Cuatro and Ursula Elaine Juarez with murder and torture (FOX 11)

LOS ANGELES - Relatives of a 4-year-old Palmdale boy whose 2019 death was originally reported as a drowning -- but later led to a criminal indictment of his parents -- will ask a judge next month to expedite the trial of their wrongful death suit against Los Angeles County due to the ages of the minor plaintiffs.

The Pomona Superior Court lawsuit stems from the death of Noah Cuatro. His great-grandmother, Evangelina Hernandez, brought the case in July 2020 on behalf of herself and the boy's sister and two brothers, all minors.

Hathaway-Sycamores Child and Family Services was named as an additional defendant, but was dismissed from the case in January by Judge Peter A. Hernandez. The suit alleged Hathaway-Sycamores knew of or suspected the abuse and misconduct occurring in Noah's home after the boy was sent to the agency by the county Department of Children and Family Services for mental health services, but failed to report the abuse.

Hernandez sided with Hathaway-Sycamores, finding that while the case was "certainly tragic," there was no evidence that any alleged negligence on the part of Hathaway-Sycamores was the "legal or proximate cause" of the boy's death. The plaintiffs have appealed the ruling.

In court papers filed Tuesday, lawyers for the plaintiffs say the case should go to trial in early 2023 for the benefit of Noah's siblings, who are ages 2, 4 and 9. The attorneys state in their court papers that the Code of Civil Procedure gives trial preference to any litigant in a personal injury or wrongful death case who is under 14 years old unless the court finds that the party "does not have a substantial interest in the case as a whole."

As time passes, it will be difficult for the young siblings to recall events, the plaintiffs' attorneys' court papers additionally state.

"Equally important, plaintiffs' level of traumatization is more likely to be exacerbated by a looming trial date far off in the future, which can cause them a greater amount of triggers and trauma as they are kept stuck in the period of time of abuse and murder of their brother without the ability to begin to move forward and cope," the plaintiffs' attorneys argue in their court papers.

A hearing on the trial preference motion is scheduled June 14.

Noah's parents, Jose Maria Cuatro Jr., and Ursula Elaine Juarez, were ages 28 and 26, respectively, when the lawsuit was filed. They were indicted in January 2020 on one count each of murder and torture in their son's death.

The indictment also charges the boy's father with one count each of assault on a child causing death and sexual penetration of a child under 10, with the indictment alleging that the latter crime occurred on the same day the boy was attacked.

The boy's mother was additionally charged with one count of child abuse under circumstances likely to cause death.

Noah's parents reported a drowning in their family pool in the 1200 block of East Avenue S around 4 p.m. July 5, 2019, but the boy's injuries later raised suspicions about how he died. Medical staff found the trauma he had suffered inconsistent with drowning.

The youngster was taken first to Palmdale Regional Medical Center and then to Children's Hospital Los Angeles, where he was pronounced dead July 6, 2019.

Noah's death occurred after multiple reports of abuse had already been made to the county Department of Children and Family Services, according to the suit.

The DCFS previously issued a statement regarding Noah's death.

"At any given time, the Department of Children and Family Services serves more than 34,000 families and vulnerable children in Los Angeles County with an unwavering commitment to pursue child safety every day in our communities," the statement read. "Our 9,000 employees are committed to this mission, and we look to do everything possible to safeguard the children entrusted to our care."

After Noah's death, DCFS social workers made threats against Hernandez "in an attempt to silence her," the suit alleges. They told Hernandez that if she made any public statements about Noah's case and/or potential lawsuits, she would lose her request for guardianship of her other three great-grandchildren and would never see them again, the suit states.