At just 23 years old, the four-time Grand Slam champion already has had quite an impressive career.

INDIAN WELLS, Calif. (AP) - Rattled by a derogatory shout from a spectator, Naomi Osaka went on to lose 6-0, 6-4 to Veronika Kudermetova of Russia in the second round of the BNP Paribas Open on Saturday night.

Osaka trailed in the first set when a woman in the stands shouted, "Osaka, you suck." The Japanese star approached the chair umpire to ask that something be done. But the umpire explained that she didn't know who it was and could not take any action.

"I didn’t hear what lady say because I really so focus on my game, on my serve game, I didn’t understand what she say," Kudermetova said. "But after that moment, I saw that Naomi, she start to cry."

Osaka later made the unusual request to use the umpire's microphone to address the crowd, which did not happen.

A supervisor came on court for a prolonged discussion with Osaka. The supervisor told the umpire "if it happens again, we're going to find him." Kudermetova waited behind the baseline for the match to resume.

Afterward, Osaka spoke to the crowd with tears streaming down her face.

"To be honest, I’ve gotten heckled before, like it didn’t really bother me, but heckled here," she said, her voice trailing off.

"I watched a video of Venus and Serena (Williams) getting heckled here, if you’ve never watched it you should watch it," Osaka said. "I don’t know why, but it went into my head and it got replayed a lot. I’m trying not to cry." 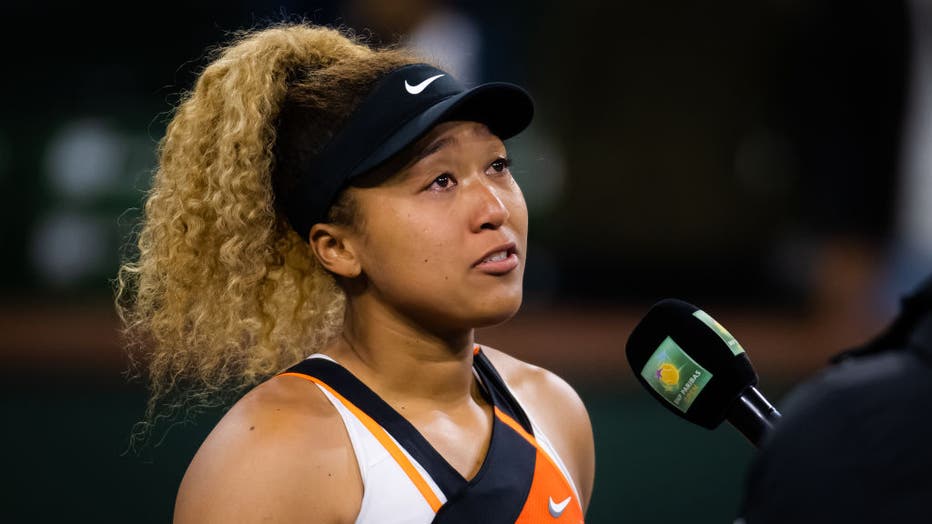 Naomi Osaka of Japan addresses the crowd after being heckled by a fan in her second-round match against Veronika Kudermetova of Russia at the 2022 BNP Paribas Open at the Indian Wells Tennis Garden on March 12, 2022 in Indian Wells, California. (Phot

The Williams sisters were heckled by fans at Indian Wells in 2001. Venus withdrew, with a knee injury, from her scheduled semifinal against Serena shortly before it was to begin. When Venus and their father Richard took their seats to watch Serena in the final against Kim Clijsters, the crowd began booing. As the match went on, fans jeered Serena. Their father said he was the target of racial slurs. The sisters boycotted the tournament for years before eventually returning.

Osaka has said she struggled with depression after winning the 2018 U.S. Open in a controversial final against Serena Williams. She withdrew from last year's French Open to tend to her mental health.

Osaka won her opening-round match against Sloane Stephens in three sets in her return to the desert, where she won the title in 2018. Osaka hadn't played a tournament since January when she lost in the round of 32 at the Australian Open. Only having played a handful of events last year, her ranking dropped to 78th in the world.

"I know she’s the strong, the great person," Kudermetova said. "I think it will be good with her."

Earlier, Daniil Medvedev beat Tomas Machac 6-3, 6-2 in the second round of the Russian’s first tournament since ascending to No. 1 in the world.

Medvedev made quick work of his Czech opponent, finishing Machac off in just over an hour. The Russian won 80% of his first-serve points and saved the lone break point he faced.

Rafael Nadal didn't have it as easy in opening his pursuit of a fourth title at Indian Wells. He got pushed to the limit by practice partner Sebastian Korda before winning 6-2, 1-6, 7-6 (3), giving Nadal a 16-0 record this year.

Nadal won the Australian Open in January for his record 21st major championship, breaking a tie with Roger Federer and Novak Djokovic. He won other titles in Melbourne and in Mexico.

Nadal trailed 5-2 in the third set before winning four straight games with two breaks of Korda to take a 6-5 lead. Korda held at 6-all to force the tiebreaker. The 38th-ranked Korda led 3-2 and then Nadal reeled off five straight points to close out the 2 1/2-hour match.

"He’s one of the greatest players of all time. He’s super hot. Hasn’t lost a match this year," Korda said. "To kind of push him to the edge was awesome. Shows a lot of my game, how dangerous it can be against tough opponents."

Earlier this week, Medvedev received a trophy commemorating his status atop the ATP Tour rankings. He displaced Djokovic, who wasn’t allowed to enter the U.S. to play because he’s not vaccinated against COVID-19.

Medvedev has to reach the quarterfinals in the desert to stay in the top spot.

"If I’m going to lose it because I’m either going to play a bad match or my opponent is going to play an amazing one, there is the next tournament in Miami," he said. "That’s how tennis is, every week is a new story. Right now it’s Indian Wells week and I want to make it a good story."

Medvedev is among players from Russia and Belarus competing at Indian Wells without flags, symbols or anthems as a result of Russia's invasion of Ukraine. The decision to eliminate their national identity was made by the International Tennis Federation and both tours.

In women's play, Jasmine Paolini upset second-seeded Aryna Sabalenka of Belarus 2-6, 6-3, 6-3 in the second round for the Italian's first career win over a top-10 player. Sabalenka fired eight aces to go with 10 double faults.

Defending champion Paula Badosa beat Tereza Martincova 6-2, 7-6 (4). Badosa's title in the desert in October began her rise from 70th in the world to the top 10.