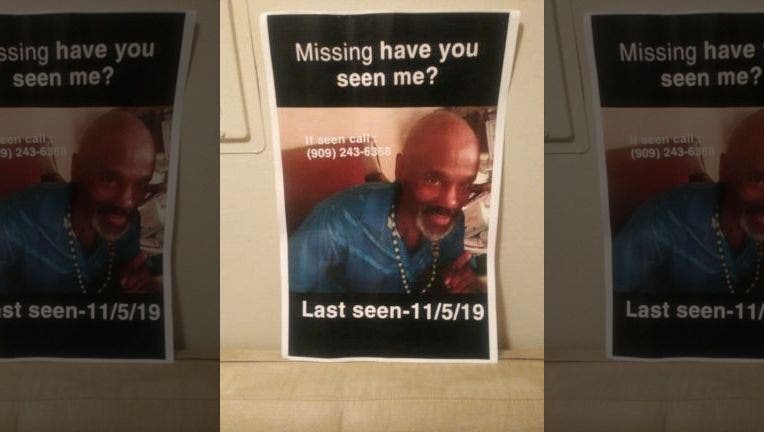 LOS ANGELES - Police asked for the public's help on Sunday to find a 62-year-old man whose family says he suffers from dementia and was dropped off by authorities at a gas station in the Torrance area earlier this month.

Douglas James was last seen in the 800 block of Sepulveda Boulevard, near the Harbor (110) Freeway, in Harbor City on Nov. 5 at 8 p.m., according to the Los Angeles Police Department.

RELATED: Man with dementia missing for weeks after being dropped off at a Torrance gas station by CHP officers

James is black, 5 feet 9 inches tall and weighs about 150 pounds, partially bald with black hair and brown eyes. He was last seen wearing a black shirt and black pants and may be in need of medical attention, the LAPD said.

On Thursday, James' family claimed the California Highway Patrol dropped Douglas off at an Arco gas station on 227th Street, near WesternAvenue, in Torrance after Douglas' brother, Donald, was arrested on suspicion of DUI.

Donald James told officers his brother suffered from dementia andwould not be able to make it to their home in the 8200 block of Main Street in South Los Angeles by himself.

Donald said after he was cited and released, CHP officers drove him home, where he discovered Douglas was missing.

A CHP spokesperson said Douglas was dropped off in a safe, public place as is their policy, but added the case is under review because of the man's disappearance.

Anyone with information on James' whereabouts was asked to call LAPD Missing Persons Unit Detective Merrill at 213-996-1800. After hours calls can be made to 877-LAPD-247. Anonymous tips can be called in to Crime Stoppers at 800-222-8477 or submitted online at www.lacrimestoppers.org.