The order by Chief Justice John Roberts comes as conservative states are pushing to keep limits on asylum seekers that were put in place during the beginning of the coronavirus pandemic.

Now on the Mexican side of the Rio Grande across from El Paso, Texas, she's anxiously awaiting a pending U.S. Supreme Court decision on asylum restrictions expected to affect her and thousands of other migrants at crossings along some 1,900 miles (3,100 kilometers) of border from Texas to California. And she's doing so while living outside as winter temperatures plunge over much of the U.S. and across the border.

She told of fleeing economic hardship only to find more hardship, such as now having to shiver through temperatures colder than any she's ever experienced. 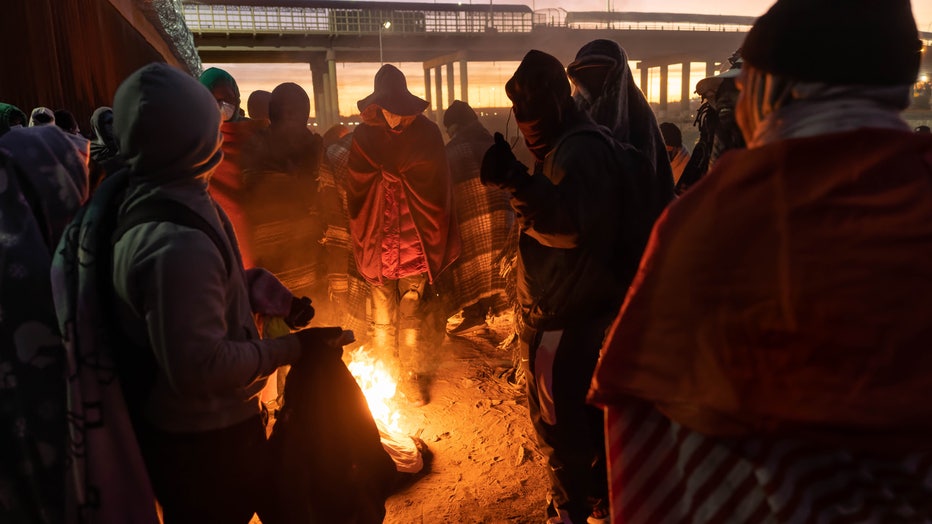 Immigrants warm by a fire at dawn after spending a night alongside the U.S.-Mexico border fence on December 22, 2022 in El Paso, Texas. (Photo by John Moore/Getty Images)

"Riding the train was bad. Here the situation is even worse. You just turn yourself over to God’s mercy," said Garcés, who left a school-aged daughter behind, hoping to reach the U.S. with her husband.

Their savings exhausted, some days they don’t eat. And on Thursday, Garcés waited and watched as hundreds of migrants formed a line to gradually pass through a gate in the border fence for processing by U.S. immigration officials. She fears immediate deportation under current asylum restrictions and doesn’t dare cross the shallow waters of the Rio Grande within view.

RELATED: How will asylum work after Title 42 ends? No one knows yet

Dozens of migrants have been spending their nights on the concrete banks of the river, awaiting word of possible changes to the asylum restrictions put in place in March 2020. In El Paso, sidewalks are serving as living quarters outside a bus station and a church for some migrants who can’t find space immediately at an expanding network of shelters underwritten by the city and religious groups.

In Ciudad Juárez, a group of Venezuelan migrants sought refuge from the cold under blankets beside a bonfire in a dirt alleyway beside a crumbling cinderblock wall.

"We’re from the coast (of Venezuela) with lots of sun and the cold affects us," said 22-year-old Rafael Gonzalez, a native of La Guaira on the Caribbean coast. "The shelter here is very full. ... And that means it’s our turn to be here, having a little bonfire."

He and others said they are eager to learn whether the U.S. will lift restrictions on migrants seeking asylum at the border. 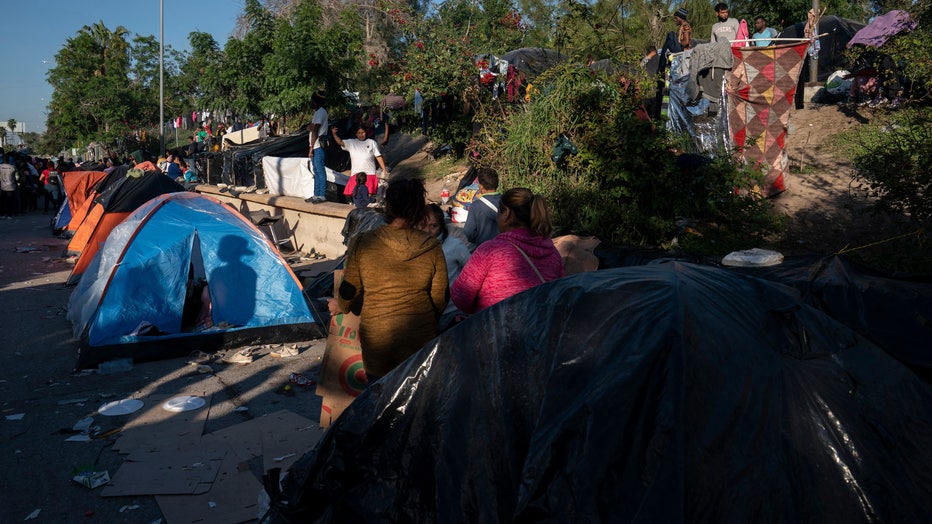 Migrants waiting to seek asylum in the United States pass their time at a migrant camp near the Gateway International Bridge in Matamoros, Tamaulipas, Mexico, on December 22, 2022. (Photo by VERONICA G. CARDENAS/AFP via Getty Images)

Nearby, migrants from Venezuela and Central America sought refuge from the cold in a three-room shelter without beds, lying shoulder-to-shoulder among blankets on a concrete floor.

The shelter has been forged gradually with repairs to an abandoned building in recent weeks. The project is the work of pastor Elias Rodriguez of the Casa Nueva Voz ministry, who grew concerned about the emergence of a small "tent city" along the Rio Grande without even a water faucet.

"Outside there are people making fires, people waiting by the door because we only have 135 spaces," Rodriguez said.

That Trump administration-era ban on asylum — Title 42 — was granted a brief extension by Supreme Court Chief Justice John Roberts this week. It’s not clear when the Supreme Court’s definitive decision will come. The Biden administration asked the court to lift the restrictions, but not before Christmas.

Under Title 42, authorities have expelled asylum-seekers inside the United States 2.5 million times, and turned away most people who requested asylum at the border, on grounds of preventing the spread of COVID-19. 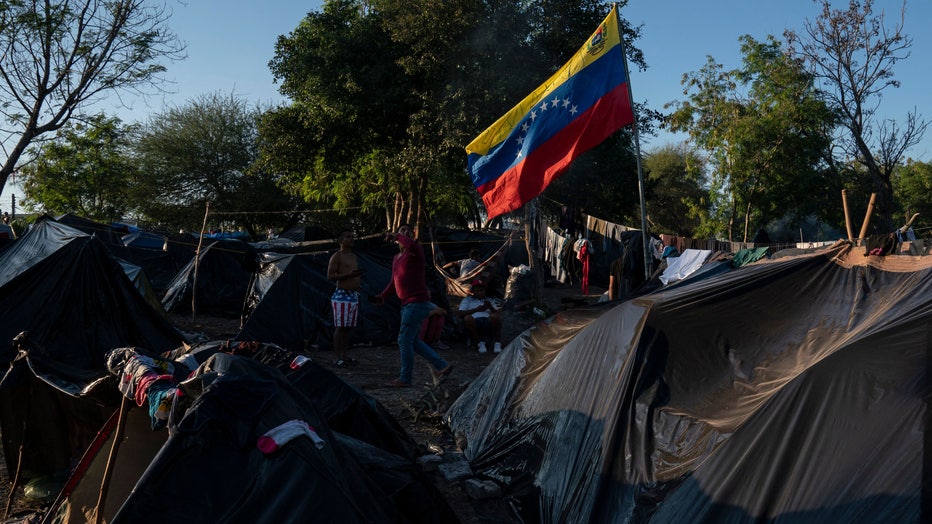 Venezuelan Luis Arzayus, 27, who is waiting to seek asylum in the United States, fixes the flag that he attached to his makeshift tent in Matamoros, Tamaulipas, Mexico, on December 22, 2022.(Photo by VERONICA G. CARDENAS/AFP via Getty Images)

Title 42 applies to all nationalities but has most affected people from countries such as Mexico, Guatemala, Honduras, El Salvador and, more recently, Venezuela.

Immigration advocates have sued to end the use of Title 42. They say the policy goes against American and international obligations to people fleeing persecution and is outdated now that coronavirus treatments have improved.

Conservative-leaning states appealed to the Supreme Court, warning an increase in migration would take a toll on public services and cause an "unprecedented calamity" with which they fear the federal government has no plan to deal.

In El Paso, Texas National Guard members have taken up positions at the behest of the state, while volunteers and law enforcement officers worried some migrants could succumb to the cold. Nighttime temperatures have been in the 30s (below 3.8 degrees Celsius) and will be even colder in coming days.

Elsewhere, hundreds of migrants fashioned a makeshift encampment — with black plastic bags for crude tents — in a park in Matamoros, Mexico, near Brownsville, Texas.

Shivering in the cold after his recent expulsion from the U.S., a former Venezuelan navy military policeman, Carlos Hernandez, spoke about how he, his wife and their 3-year-old daughter recently struggled through the cold river, only to be turned back after reaching the other side. 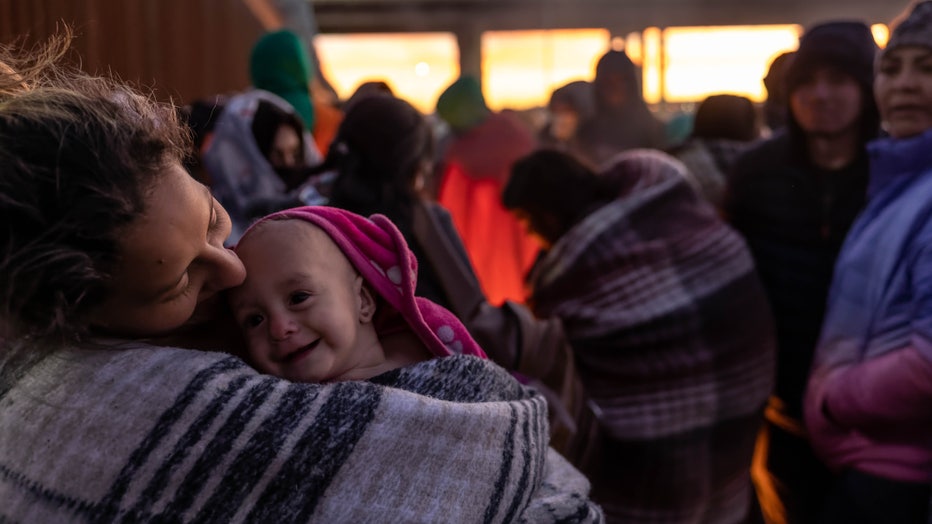 Hernandez said he had a falling out with superiors in Venezuela for refusing orders to take action against government opponents in the navy. He said he hoped to cross again and eventually reach Canada.

"It was very cold," he said of the river crossing.

In Tijuana, Mexico, across from San Diego, an estimated 5,000 migrants were staying in more than 30 shelters and many more renting rooms and apartments. Razor-topped walls rising 30 feet (9 meters) along the border with San Diego make illegal crossing daunting.

Francisco Palacios waited hours with his wife and 3-year-old daughter at a Tijuana-area border crossing at midweek before going to a hotel to nap. He said the family from the western Mexican city of Morelia awaits the court decision on whether and when to lift the pandemic-era restrictions that have prevented many from seeking asylum.

READ MORE: Suspense grows at border over future of US asylum rules

"We don’t have a choice," Palacios said Wednesday, explaining his family arrived in Tijuana two weeks earlier to escape violence and gangs that for years extorted a chunk of their income selling fruit from a street cart.

On Thursday, Edwin Lopez of Tegucigalpa, Honduras, said he arrived three months ago at Ciudad Juárez with his wife and three sons, ages 4, 9 and 13. They’ve been expelled once from the U.S. after crossing to request asylum, he said.

As temperatures dropped Thursday, they arranged blankets on the floor of a shelter into a tidy bed.

"We feel good, we’re comfortable. Not really like we would want to be as if we were in our own home, but what more can we ask for?" Lopez said. "It’s better than being out there, enduring the cold, exposed to robberies, abuses."