Dodgers championship merchandise set a sales record for the first eight hours it was available on Fanatics, surpassing the Chicago Cubs, Los Angeles Lakers and Philadelphia Eagles immediately following their titles, according to Michael Rubin, chairman of the online retailer of licensed sportswear, sports equipment and merchandise. 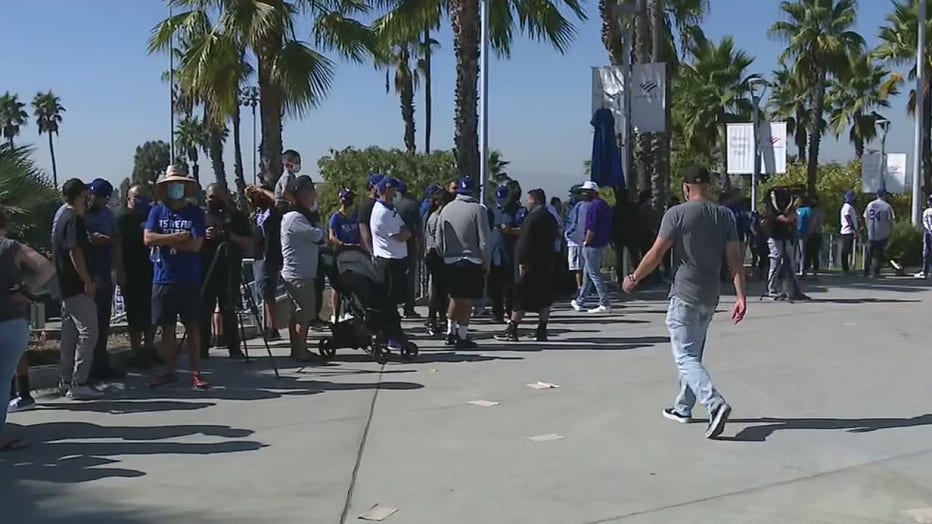 The Dodgers returned to Los Angeles Wednesday, one day after their 3-1 victory over the Tampa Bay Rays in Arlington, Texas, gave them a six-game victory in the best-of-seven series.

However, third baseman Justin Turner, who was removed from Tuesday's game before the start of the eighth inning due to a positive COVID-19 test, was not with them and will fly home separately on a charter flight.

In a statement to City News Service, the Los Angeles County Department of Public Health said the agency
"is working closely with the Dodger organization to ensure that appropriate actions are taken to prevent additional exposures and provided direction on the required quarantine of players and staff that are close contacts."

DPH officials said they "join everyone in wishing the Dodger player who tested positive for COVID-19 a fast and complete recovery."

"As with all other cases of COVID-19, isolation and quarantine are essential for reducing further spread,'' according to the agency. Public Health protocols state that "a person who tests positive for COVID-19, even if they do not display symptoms, must isolate for 10 days and must be symptom- and fever-free for 24 hours before they can resume contact with any other people. Additionally, anyone who has been a close contact of a person who has tested positive for the virus for 15 minutes or more over a 24-hour period must quarantine for 14 days.''

Los Angeles Mayor Eric Garcetti said Wednesday anyone potentially exposed to the virus needs to quarantine, no matter who they are.

Turner's "diagnosis is a reminder that anybody can get this and anybody can pass this on too, so it's a reminder of how safe we all need to be, with every action we take and everything we do,'' Garcetti said.

Turner drew criticism from Major League Baseball for leaving isolation and joining his teammates in celebration on Globe Life Field, choosing "to disregard the agreed-upon joint protocols and the instructions he was given regarding the safety and protection of others."

"While a desire to celebrate is understandable, Turner's decision to leave isolation and enter the field was wrong and put everyone he came in contact with at risk,'' according to an MLB statement. "When MLB Security raised the matter of being on the field with Turner, he emphatically refused to comply."

The Commissioner's Office has begun a "full investigation into this matter and will consult with the Players Association within the parameters of the joint 2020 Operations Manual," MLB announced.