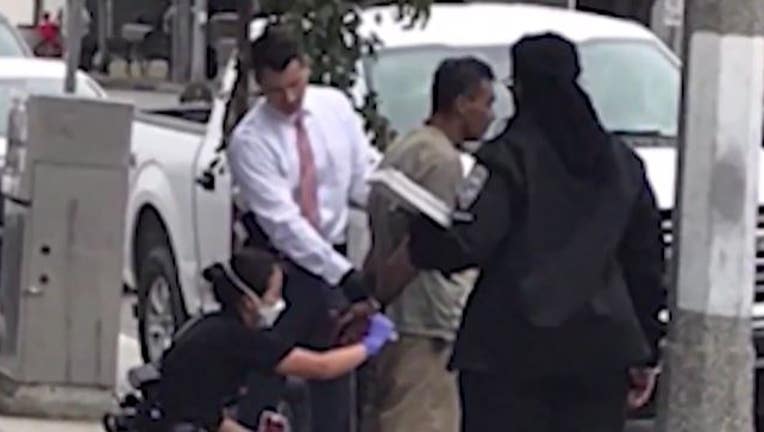 LOS ANGELES - A man pleaded guilty Friday to a crime spree in Los Angeles and Santa Monica that left five men dead and seven others injured, along with the killings of his aunt and uncle in Texas.

During a subsequent video conference in the downtown Los Angeles courtroom, Escobar pleaded guilty to the August 2018 killings of his aunt, Dina Escobar, and his uncle, Rogelio Escobar, in Texas, in a plea deal that spared him a potential death sentence in that state. He was also sentenced to life in those two slayings, and will serve his time in a California prison.

Escobar -- who had indicated as early as November 2018 that he wanted to settle his case without going to trial -- admitted the special circumstance allegations of multiple murders and murdering Cruze during the course of a robbery, along with pleading guilty to attempted murder involving seven other victims.

"Guilty," the defendant said over and over again as Hanasono asked him how he pled to each of the charges.

During the hearing, Suzanne Gonzalez called Cruze an "amazing father" who coached the baseball and basketball teams of their son, who was 11 when his father was killed.

"We suffered a tragic loss that we may never recover from," she said during the hearing. "We will do everything to cherish his memory."

In a statement read in court on her behalf, Cruze's mother said she prayed that her son didn't struggle or suffer and said her son -- who would have given Escobar money if he had been asked -- was "murdered for no reason whatsoever."

"I grieve and suffer daily...," she wrote. "All of us are devastated."

Authorities said Escobar drove to California after being questioned by authorities in Texas about the disappearance of his aunt and uncle, who were siblings.

Los Angeles police obtained surveillance videos in downtown Los Angeles that showed Escobar beating a man with a baseball bat the same day Ridout and Williams were killed and then going through his pockets, according to a sentencing memorandum filed by Los Angeles County Deputy District Attorneys Victor Avila and Hilary Williams.

The defendant was wearing distinctive clothing and had a "very distinct bow-legged walk," and Los Angeles police publicized video stills showing Escobar to ask for the public's help in finding him, according to prosecutors.

Shortly after Martinez was struck in the head with what appeared to be bolt cutters, a Santa Monica police officer recognized him as the man involved in the downtown Los Angeles killings and detained him, according to the prosecution's sentencing memo.

Some of the attacks were against people who were homeless, but Los Angeles Police Department Capt. Billy Hayes said in 2018 that the attacks did not appear to be based on any hatred toward homeless people.

"I think it was a crime of opportunity," he said. "... It appears the motive in most of these cases was robbery."

Authorities said in September 2018 that Escobar was a person of interest in the disappearances in Houston of his aunt and uncle.

During an October 2018 interview with police, Escobar said he wanted to talk with them "about the people (he) killed and their locations" and said there were "bodies they can't find," such as his aunt and uncle in Houston, whose bodies he said had been dumped in separate trash bins, according to the prosecution's sentencing memorandum.

"The reasons defendant gave for killing some of the victims in Los Angeles included the following: the victims irritated him, they were disrespectful to law enforcement, or he robbed them because he needed money," according to the sentencing memorandum.

He was subsequently charged in Texas with killing his aunt and uncle, whose bodies were not able to be recovered from a landfill.

The prosecutors noted in their sentencing memorandum that the settlement would "not only hold defendant accountable for crimes committed against all of the victims in the instant case and keep him in custody for the rest of his life, but it would also avoid having to conduct a trial in which the surviving victims, witnesses and relatives of victims would have to relive the violent acts committed against them or their loved ones."

Criminal proceedings were suspended in California after a doubt was declared about his mental competency to stand trial, but proceedings were reinstated in June 2021 after he was determined to be competent.

One of Escobar's attorneys in the Texas case, James Stafford, told City News Service after the hearing that his client had been "having some major mental issues" and that he thought "the gods and the demons were telling him to do this."

Escobar served five years in prison from 1995 to 2000 in Texas for some type of burglary, and had subsequent arrests in 2017 and earlier in 2018 on suspicion of assault and criminal trespassing, Hayes said earlier.

Escobar is an El Salvador native who was deported six times between 1997 and 2011, according to U.S. Immigration and Customs Enforcement.