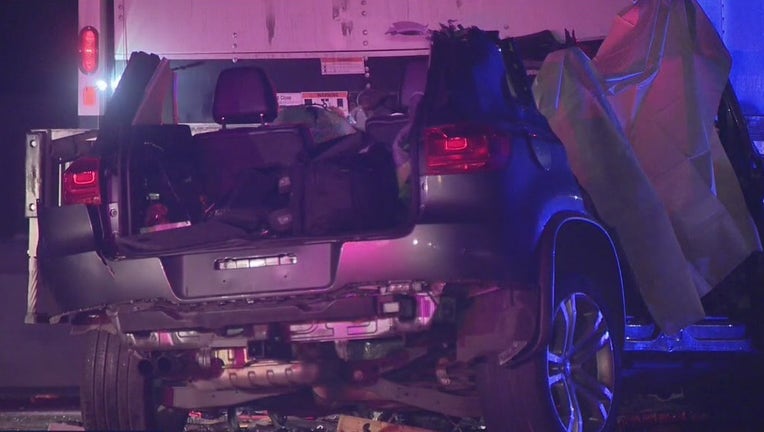 LOS ANGELES - A 29-year-old driver of a box truck was arrested on suspicion of DUI after a deadly crash on the 101 Freeway in Sherman Oaks early Monday morning, authorities said.

One killed in gruesome crash on 101 Freeway in Sherman Oaks

One person was killed following a crash involving an SUV and a box truck on the 101 Freeway in Sherman Oaks on the morning of Feb. 8.

California Highway Patrol received a call at 1:50 a.m. from someone who reported a box truck was stopped on an eastbound lane and was blocking traffic.

Three minutes later, CHP received a second call reporting an SUV had slammed right into the back of the box truck and immediately caught on fire.

Firefighters used special equipment to lift the truck off the SUV. The driver was pronounced dead at the scene, CHP said.

The driver of the box truck, identified by authorities as Michael Snee, initially told authorities he had a mechanical issue that forced him to stop. However, upon further investigation, he was arrested on suspicion of DUI.

"We work day and night to get the impaired drivers off [the road] and we wish that they would take other means, which we all know there are plenty of other means out there," said CHP Officer Casey Ramstead.

In addition, it was a foggy morning in Los Angeles and officials were investigating if weather conditions played a factor in the deadly crash.