After a year of virtual events due to the COVID-19 pandemic, the Malibu Triathlon is back with in-person competition!

More than 5,000 competitors came together at Zuma Beach to raise more than $800,000 for Children's Hospital Los Angeles.

Among those at the Malibu Triathlon? Actors, athletes, and even a team from FOX 11 Los Angeles. The FOX 11 team featured reporter Sandra Endo doing a 1/2 mile swim, photographer Sam Dubin completing a 17-mile bike ride, and anchor Elex Michaelson running for four miles. 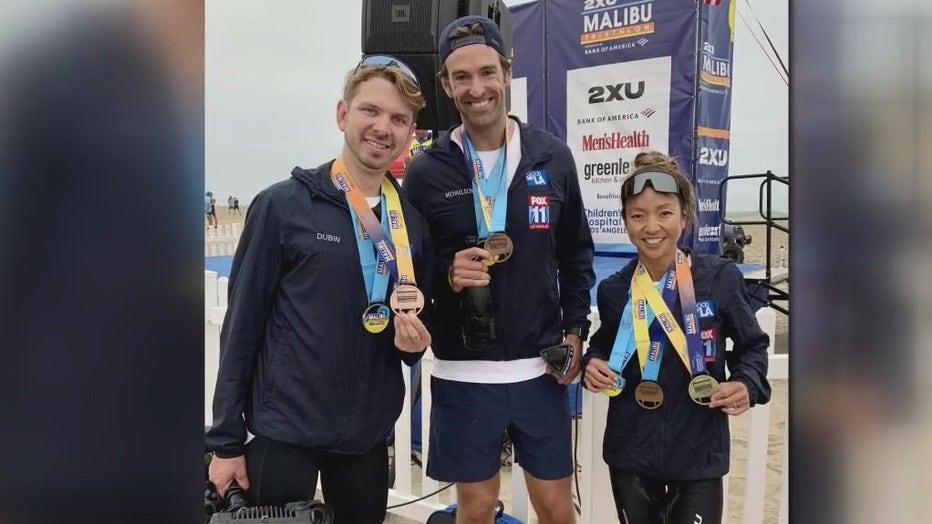 FOX 11's team finished first among the local news teams in the competition. Sandra Endo also completed the bike, ride and swim on her own. She was the top finisher among women in the celebrity division and third overall.

Why did Sandra choose to do the extra work?

"Why did I want to? Because the feeling of passing KTLA and Channel 7 out there individually," she joked.

Dubin added. "It's fun! You get to cycle in one of the most beautiful places for a great cause."

"You can’t beat this, the energy, the crowd, it's so nice out here," Efron said.

He was first introduced to the race years ago by his brother Zac and it was the first triathlon he competed in. Actor Chace Crawford finished second overall in the celebrity division.

Three FOX 11 employees will participate in the Malibu Triathlon over the weekend. The event is a critical fundraiser to support the pediatric cancer research program at Children’s Hospital Los Angeles.

"It felt great, I kept thinking, ‘Cheeseburger, cheeseburger,’ and now I can go have one!" Crawford said.

Actor Mark Feuerstein finished fourth overall in the celebrity category. For him, this race is personal.

"When I’m out there in the ocean, Addy is behind me the whole time going dad, I got through two open heart surgeries, you can swim a little further," he added.

One of the beneficiaries of CHLA is Malakai Carey. He overcame childhood cancer at Children's Hospital and performed the national anthem at the event...while in remission.

"It's definitely a triumph to be from completely sick to be here singing in front of thousands of people is amazing," he said.

Dr. Alan Wayne of Children’s Hospital Los Angeles said this pandemic year has been tough on many levels--including fundraising. He's optimistic about seeing the crowd in Malibu.

"For me, this is always an inspiration but this is more like a rebirth," he said.