Tuesday marks one year since George Floyd was killed at the hands of Minneapolis police officers.

LOS ANGELES - Tuesday marks one year since George Floyd was killed at the hands of Minneapolis police officers. Floyd’s killing sparked protests nationwide as many cities experienced unrest, including Los Angeles. One year later, community leaders are celebrating his life by spreading the message of unity.

Floyd was killed on May 25, 2020, and his death was recorded by witnesses who pleaded with ex-Minneapolis police officer Derek Chauvin, to remove his knee off Floyd’s neck. The video was seen across the globe as many were under lockdown restrictions due to the coronavirus pandemic.

Although Minneapolis is located nearly 2,000 miles from Los Angeles, the pain and impact were felt strongly in Southern California where some residents were simply fed up with police brutality. It was just 28 years before Floyd’s death where the city was the epicenter of riots following the Rodney King beating.

In the days following Floyd’s death, people in cities across the nation took to the streets to fight for social justice. Despite a handful of peaceful protests, many of them turned violent, which lead to the destruction and looting of several businesses. 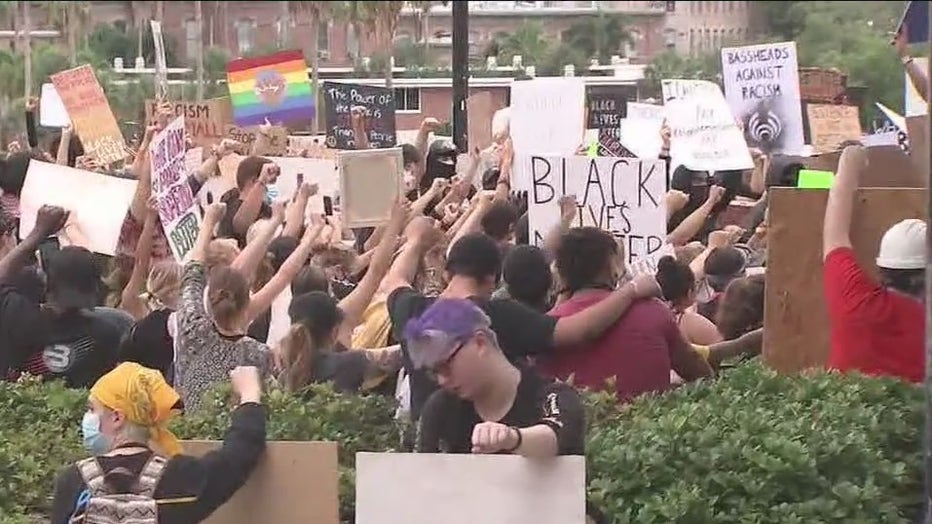 Protests were held throughout the City of Angels, including in downtown LA where crowds called for change and police reform.

LZ Granderson discusses George Floyd one year after his death

Worldwide protests and demonstrations erupted after George Floyd was murdered one year ago. LZ Granderson provides insight and shares his personal struggle one year after Floyd's death.

A Starbucks located on Sixth and Spring streets was one of the first businesses that was looted during the protests, and also where the first George Floyd mural went up in Southland. FOX 11 caught up with the artist behind the mural as he reflected on the last year in Los Angeles. 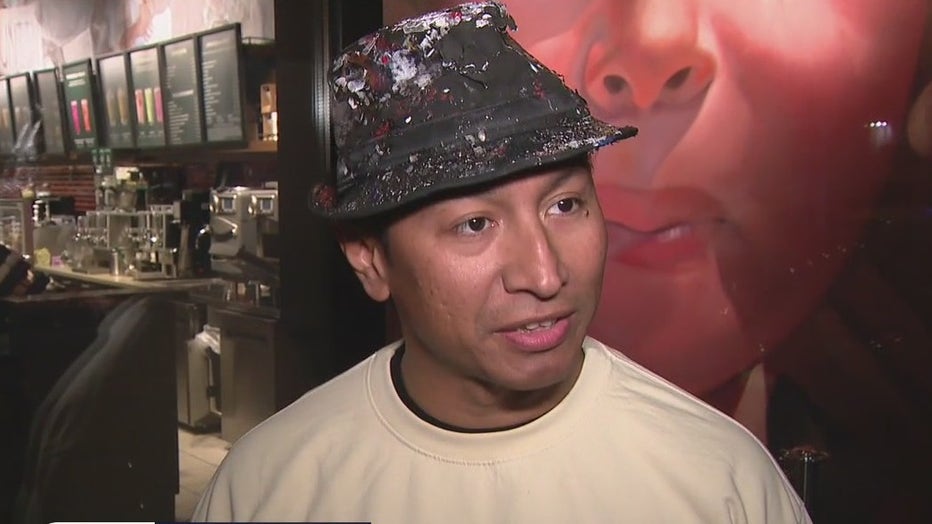 "This intersection has been kind of an intersection of introspection for many reasons and the justice mural that I painted here a year ago was painted in the spirit of solidarity with the movement. Peace, love, change and hope are things that we need to come together on, " said mural artist Robert Vargas. "Where we need to go from here is we need to communicate. We need to be united. We’re stronger together, but at the same time, change doesn’t always have to be one that is tearing down businesses but actually investing in the community. Sometimes the community’s the destination and that’s where I draw my biggest inspirations from." 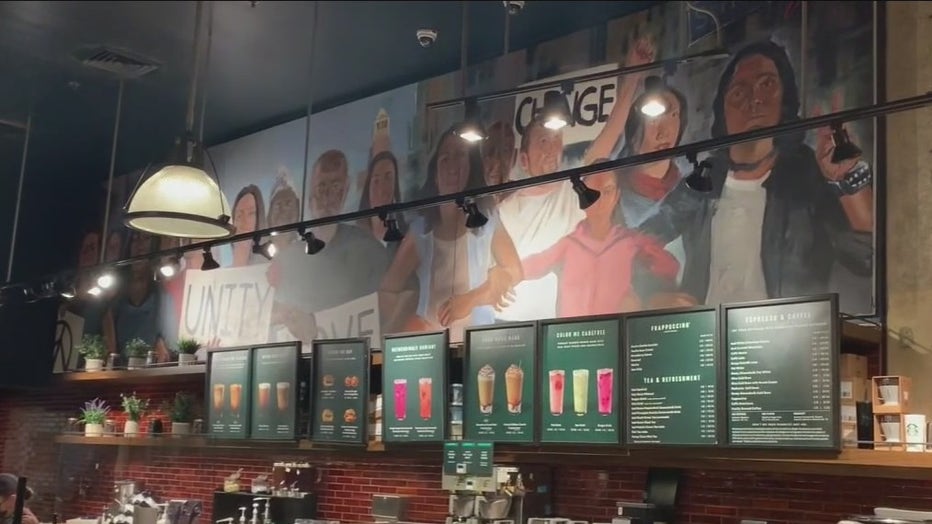 Although the mural is no longer there, Vargas was asked to paint a permanent mural inside the store with a message of unity and change.

Black Lives Matter Los Angeles held a protest, called "Staying on the Streets." It begins at 9 a.m. at City Hall.

The crowd of about 200 people marched from City Hall, stopping by the Board of Supervisor’s building, marching past LA Sheriff’s Headquarters and ending at the Olvera Street Plaza, where the Museum of Social Justice has an exhibition of art pieces about the movement.

There were angry calls for defunding the police, but also musical celebrations of racial pride.

"For the City and County of LA, definitely, there hasn’t been any change. All across the nation, all across the world, people are saying police reform is coming as a result of having seen George Floyd’s murder on video. In LA initially, there was a lot of heightened interest with our Mayor and our politicians, but over the year, it’s diminished over the year so there hasn’t been enough. So, we need to keep protesting, we need to keep demanding, we need to keep trying to get the change that we want," Paula Minor, a BLMLA organizer said.

"I think the first thing that has changed is we are talking about real change. We’re talking about defunding the police, divesting and investing. We are talking about the fact that Black Lives Matter is real and that we shouldn’t have to debate it. We shouldn’t have to fight about it. We shouldn’t have to hear other sides. It’s a real position. Unfortunately, though, it comes at a high price. It comes at Black death. If you look at what happened with George Floyd, with Breonna Taylor, with Ahmaud Arbery, with the number of people who were killed that year, that’s a heavy price for any people to make real change and what Black Lives Matter wants to do is in-state sanctioned violence. Secondly, we want real accountability and thirdly, we want defunding of the police," a Black Lives Matter organizer told FOX 11.

However, not all believe the social justice movement is effective. 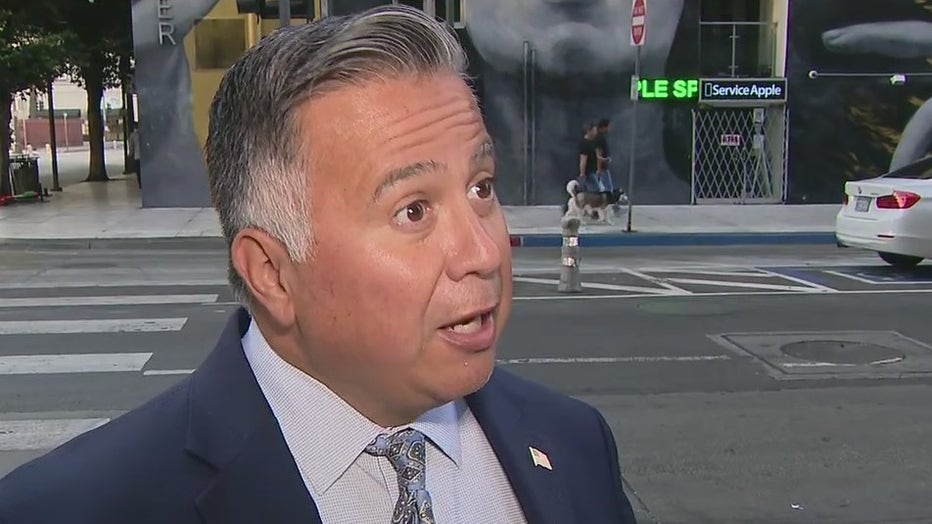 "That action of defunding the police is demoralizing to our men and women who put on the badge every day and risk their lives. I want to respond to the notion that the police department is responsible for the criminalization of people of color. That couldn’t be further from the truth, that’s a false narrative. The only person responsible for the criminalization is the criminals themselves for their criminal acts, period," said retired Los Angeles Police Department Detective Moses Castillo. "It’s time to support the police officers. Go out there, get involved and elect people who are going to support the police, put people first, and not these movements because it’s chaos."