LOS ANGELES (FOX 11) - The LGBTQ+ community gathered in Downtown Los Angeles Saturday night, expressing their anger over a recent incident that happened at a bar.

Two transgender women say they were forcibly removed from a bar in Downtown L.A. Friday night after a heterosexual couple reportedly harassed and threatened them. The end of the incident was caught on cellphone video. 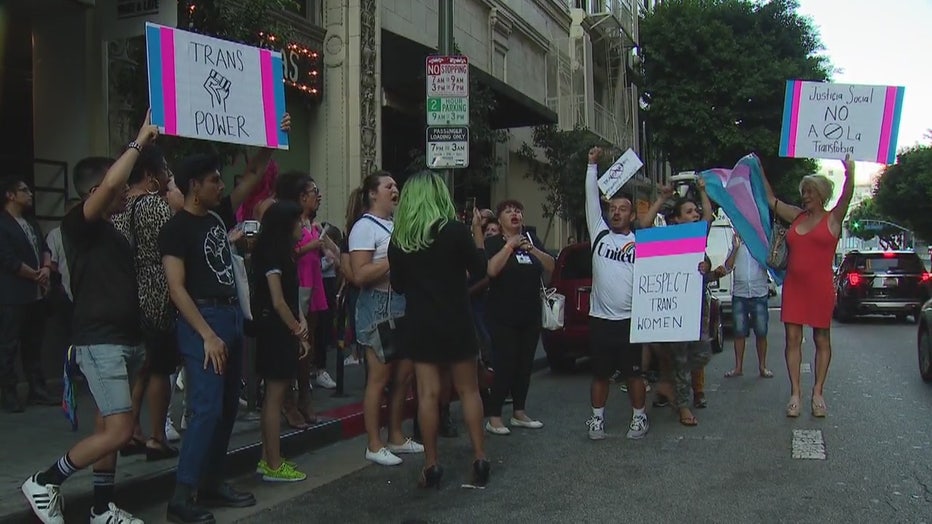 After setting up for the event, two transgender women, Jennifer Bianchi and her friend were at Las Perlas for about an hour when Bianchi says a heterosexual couple started insultingly calling them “men.”

She says then they got physical and aggressive so Las Perlas security rushed over and kicked out all of them.

“The security guard started pushing me, started throwing his body against me, telling me to get out and I’m telling him ‘no,’ don’t touch me and he saying, ‘I’m going to put hands on you”, Bianchi told FOX 11.

The end of the video, captured on an iPhone, shows the bouncer dragging out her friend by her neck.

“I just think we should be treated as humans and the way they were treating them was as if they were dragging out dogs and that’s not ok,” said protester Alexia Partida Cruz.

Bianchi says the heterosexual couple then threatened to come back and shoot them for being “fags.”

“We’re humans, we pay taxes so what are you so afraid of? Don’t be so afraid of us, we’re just humans,” she added.

Las Perlas managers heard about the LGBTQ+ planned protest and decided it was best to close down the bar for the night.

One of the bouncers involved in the incident who is also a veteran says the two transgender women started it.

“I do not judge one’s skin color, sexual orientation, or race. I judge them by the actions and character. We did everything by the books, they were asked to leave several times due to a confrontation that the women started. There’s no way that it could have been handled any better. Unfortunately, the last thing we want to do is to become physical but we must protect the bar and ALL patrons.”