An investigation is underway outside the popular Bossa Nova restaurant in Hollywood after a 23-year-old man was shot and killed during the early morning hours of Nov. 23.

LOS ANGELES - Police sought up to eight suspects in the deadly shooting of a 23-year-old man outside the Bossa Nova Brazilian Cuisine restaurant in Hollywood Tuesday morning.

Responding officers with the Los Angeles Police Department said they arrived at the scene located near Sunset and Formosa avenues around 2:30 a.m. where they discovered the victim suffering from a gunshot wound to the head.

The victim was located on the street and was pronounced dead at the scene by fire paramedics.

The LAPD said multiple bullet holes could be seen on the driver’s side window of a Mercedes G-Wagon that was next to the victim. 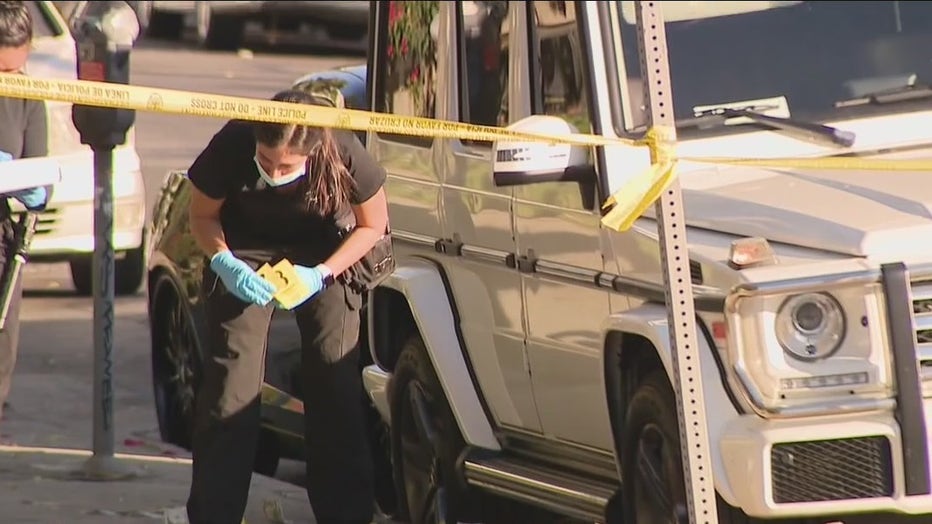 A woman who was outside the victim’s vehicle was talking to him when the group of suspects approached her and attempted to rob her, according to the LAPD.

The victim, armed with a handgun, exited his vehicle to assist and was shot and killed by one of the suspects.

Investigators added two semi-automatic handguns were used in the shooting.

Police sought up to seven suspects in a deadly shooting in Hollywood off Sunset Boulevard on the morning of Nov. 23.

The suspects were described as seven men who were wearing black face masks. They left the scene in a dark grey Nissan Altima and an older model white Mercedes.

This is the second shooting in less than six months outside the popular restaurant. On June 30, two people were shot in an attempted robbery and the suspects in that shooting remain at large.