LOS ANGELES - Members of the Los Angeles County Sheriff Civilian Oversight Commission blasted Sheriff Alex Villanueva Monday after he declined to testify before the panel unless it meets certain conditions, namely the presence of a neutral hearing officer, the ability to cross-examine witnesses and deliver an opening statement, and a preview of all exhibits.

Commissioners at the meeting rebuffed the sheriff's requests and seemed resigned to the reality that he will never voluntarily testify during the panel's attempt to prove alleged deputy gangs within the agency. Both Villanueva and his undersheriff, Timothy Murakami, will be held in contempt of court if they don't appear at the next hearing, which is tentatively scheduled for August, according to Commissioner Robert Bonner.

"These requests are out of line," Bonner said. "They're not appropriate. And we should make clear we're not going to accede to these requests."

In a letter sent to the commission's executive director Brian Williams on Sunday, Villanueva said he was prepared to testify before the commission Monday, but "was deeply disappointed to learn the Commission is unwilling to allow very basic and reasonable elements of a legitimate oversight meeting designed to understand the truth. It makes neutral observers question whether the Commission's real agenda is to learn the facts, or to put on a show."

The commission plans to submit a written rejection of Villanueva's proposed protocols.

"This is a neutral body," Bonner said. "We're an independent body. We're investigating a matter. It's not a court hearing. It's not a criminal proceeding." 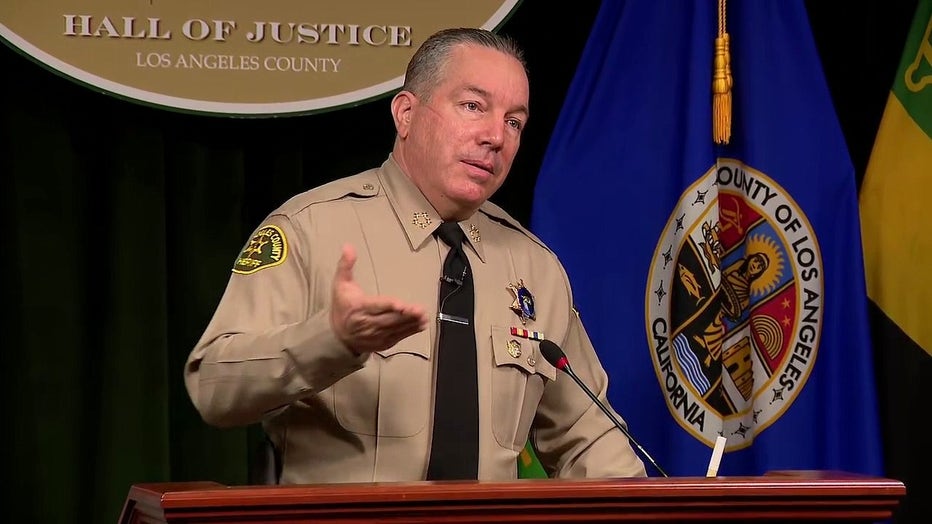 Commissioner Lael Rubin said the sheriff's letter, sent to the commission Sunday detailing the reasons for not testifying, was in line with his previous "absurd requests" when faced with subpoenas.

"This is a repeat of his outrageous behavior," Rubin said. "And it's clear that he never intends to appear before this commission."

"It's just not appropriate for this oversight body to allow the sheriff to dictate the terms of our oversight hearing," Kennedy said.

SUGGESTED: LASD denies allegations of its deputies being associated with Banditos, Executioners

Villanueva said earlier he was prepared to testify before the commission Monday, but "was deeply disappointed to learn the commission is unwilling to allow very basic and reasonable elements of a legitimate oversight meeting designed to understand the truth. It makes neutral observers question whether the commission's real agenda is to learn the facts, or to put on a show."

Bert Deixler, counsel for the commission, said a representative for Villanueva informed him Friday that the sheriff would be available to testify between 9 and 11 a.m. Monday.

But by Sunday, the Villanueva had changed his mind.

The sheriff, who has repeatedly accused the county Board of Supervisors and Inspector General Max Huntsman of pursuing personal political biases in clashes over the alleged deputy gangs and other issues, expressed concern in his letter to the commission about "demonstrably false statements having already been accepted by the commission."

"A legitimate oversight process should be based on full information, not the element of surprise or a reliance on `gotcha' questions," he wrote. "I would also call attention to the fact on several occasions, the documents presented by the commission were clearly altered or manufactured, most notable, the so-called `Brady list' information referenced at the July 1, 2022, special meeting ... when an anti-law enforcement website was falsely represented as an official State of California website.

Villanueva said he "strongly" believes that every public servant must be open to public scrutiny and legitimate oversight.

Villanueva wrote: "This is why I sent Department executives, on several occasions, to answer questions for the Civilian Oversight Commission (COC) about deputy cliques and subgroups. Additionally, on March 26, 2019, and December 17, 2020, I personally appeared and answered questions for the COC about deputy cliques and subgroups. Subsequently, I testified under oath before the Office of the Inspector General (OIG) on April 22, 2022, and I offered to testify again in May on the issue of deputy subgroups."

On Thursday, attorneys for the county filed papers asking a court to consider holding Villanueva and Murakami in contempt for allegedly ignoring subpoenas to appear before the commission and testify about alleged deputy cliques.

The commission subpoenaed Villanueva because in 2018 his then-Division Chief Matthew Burson issued an order barring sheriff's department internal investigators from questioning witnesses about what role a suspected deputy gang known as the "Banditos" played in assaults by some deputies upon others at a department party, the petition states.

"Burson thus robbed criminal investigators before the investigation started of their best chance of exposing the Banditos, even though the evidence strongly suggested their direct involvement in the attacks and deputy gangs have reportedly plagued the department for decades," the petition states.

Villanueva's testimony is now even more critical because Burson, who is now retired, testified under oath on July 1 that Villanueva, through his then-chief of staff, directed him to issue the order to the internal sheriff's department investigators to not look into the activities of the Banditos, the petition states.

"The COC naturally wants to ask Sheriff Villanueva what reason he had for directing Burson to foreclose questioning regarding the Banditos," the petition states.

Murakami's failure to appear on July 1 was his fourth alleged consecutive disregard of a subpoena from the commission, according to the petition, which further states the commission wants to question the sheriff's department veteran of more than three decades about gangs as well.

Villanueva said he is "more than happy to speak with the commissioners as soon as these requests are granted."