Business owners and residents in Orange and Los Angeles counties are rejoicing. Both counties have now met the criteria to move into the less restrictive orange tier.

LOS ANGELES - Los Angeles and Orange Counties have met the criteria to move into the less restrictive "orange tier" in California's Blueprint for a Safer Economy, allowing a loosening of business capacity limits and the reopening of bars for outdoor service.

New figures released by the state Tuesday show that Los Angeles County and Orange County have officially met the benchmarks for advancing to the orange tier. However, Los Angeles County health officials on Tuesday said they plan to maintain a few stricter restrictions than the state, with a revised health order expected to be released Friday.

Qualifying for the orange tier requires a county to have an average daily rate of new COVID infections of 3.9 per 100,000 residents, along with a testing-positivity rate of 4.9% or less, and maintain those levels for two consecutive weeks. 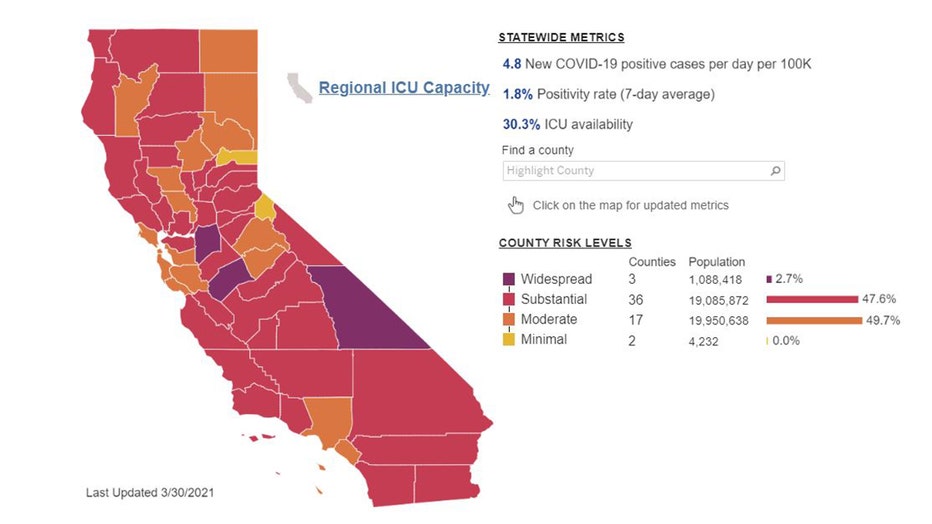 Among the biggest changes for counties that enter the orange tier is the reopening of outdoor bars with some health and safety modifications. Bars will also no longer be required to serve food in order to be open.

In Los Angeles County, bars will only be allowed to stay open until 10 p.m. daily. Additionally, the county has barred the establishments from having live entertainment.

Offices in nonessential industries can also reopen, however, companies are encouraged to keep employees working remotely.

Additionally, cardrooms can reopen indoor operations, as well as bowling alleys at 25% capacity. 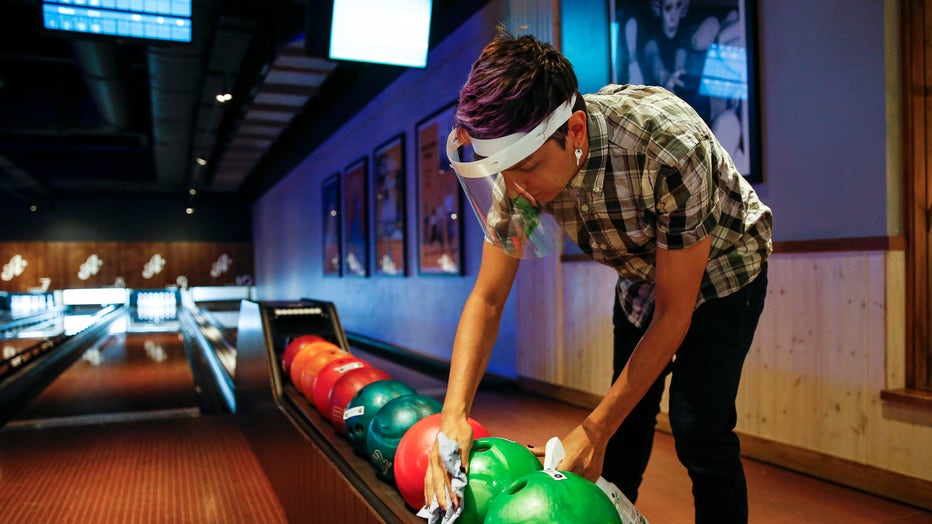 FILE PHOTO - Bowling balls are cleaned between games at a bowling alley amid the COVID-19 pandemic. (Photo by Hollie Adams/Getty Images) (Getty Images)

Retail stores will no longer have capacity limits when the counties enter the orange tier, although social distancing and pandemic safety protocols are still required.

Outdoor sporting events and concerts can reopen with live audiences at 33% capacity.

Smaller theme parks can completely reopen without capacity limits as long as they maintain social distancing and pandemic safety protocols. Larger theme parks will be permitted to operate at a 25% maximum capacity instead of 15%.

While Los Angeles County largely aligned with the state's guidelines, they have chosen to implement some stricter restrictions. Among those differences is that while the state allows the removal of capacity limits at retail stores, Los Angeles County will not be. County Public Health Director, Dr. Barbara Ferrer, said Tuesday afternoon that the county is choosing to maintain capacity limits in order to allow for social distancing.

Another difference is that Los Angeles County is capping capacity at personal care services, hair salons, barbershops and grocery stores at 75%, while the state doesn't have capacity limits for those businesses in the orange tier.

Mike Afram, the President of Karmel Shuttle Services, believes moving into the orange tier is a step in the right direction.

"We're finally seeing a light at the end of the tunnel. It's a way down yet but we're starting to see that light," said Afram.

Afram's business relies on tourism and is a one-stop-shop transportation service. The company also provides tickets and tours for attractions. Afram said business has been nonexistent during the majority of the pandemic.

"We basically shut down about a year ago. I believe it was March 15, where we basically laid off all our employees and grounded all of our vehicles and remained shut down effectively through 2020," he said.

The business reopened in February of 2021, and has started to see a slow increase in business. He has hope that the orange tier is a positive sign, but doesn't believe he will see an immediate impact on his business.

"It doesn't mean a lot for us right now but it's definitely a good sign and we're heading down the right road. It's a great path that we're heading down but because it's going to be 25% capacity at the theme parks, I believe it's going to be centralized to Southern California residents or at least California residents and that means for the most part, people aren't coming to play and stay, they're coming for the day so it doesn't mean a lot for the hotels, restaurants or transportation companies such as ours but again it's a great move forward and a great road that we're heading down," he said.

"We're on the right track and hopefully the government of California continues to allow this progress to happen and this reopening to happen and great things will happen with that," he said.