LOS ANGELES - The Los Angeles City Council voted 13-2 Thursday to tentatively approve an ordinance to restrict sleeping and homeless encampments in certain areas of the city, but the ordinance's adoption was delayed because it required unanimous approval upon first consideration.

"What is wrong with this ordinance today and why am I voting against it? Because what we're doing today, even as improved, tells people who are unhoused and unsheltered and have no place to go where they cannot sleep, but it does not tell them where they can sleep. That's what it comes down to for me ... where can people go, where can people sleep when they do not have an alternative,'' Bonin said.

Bonin shared with council members his own experience being unhoused, saying, "some of those nights I slept in the car, some of those nights, when my car was in the shop, I slept on the beach. I cannot tell you how much turmoil is in your heart when the sun is setting and you don't know where to sleep. I cannot tell you how demoralizing and dehumanizing and defeating that experience is when you don't know where you're going to sleep.''

He added that the Los Angeles Homeless Services Authority said Thursday that the city only has enough beds to shelter 39% of the city's homeless population. The ordinance would prohibit sitting, sleeping, lying, storing personal property or otherwise obstructing the public right-of-way in several areas of the city including within two feet of any fire hydrant or fire plug, or within five feet of any operational or utilizable entrance or exit, or within 10 feet of a loading dock or driveway, or in a manner that interferes with any activity for which the city has issued a permit, or in a manner that
restricts accessible passage as required by the Americans with Disabilities Act, or anywhere within a street, including bike paths.  It would also obstruct the public right-of-way within 500 feet of a "sensitive" facility, including schools, day care facilities, parks and libraries.

The ordinance would also restrict blocking the public right-of-way once the Los Angeles City Council passes a resolution to do so, posts signage and gives notice in the following areas:

-- up to 1,000 feet of a facility opened after Jan. 1, 2018 that provides shelter, safe sleeping, safe parking or navigation centers for persons experiencing homelessness.

The ordinance would also allow the city to prevent encampments for a period of no longer than one year in areas that are deemed an ongoing threat to public health or safety, including due to:

The City Council on Tuesday, when passing a motion to request the city attorney draft the ordinance, also instructed the city administrative officer to develop and implement a Street Engagement Strategy within 30 days to offer people suitable and available overnight shelter, interim or permanent housing.

The motion also instructed all relevant city departments to minimize engagement between law enforcement and people experiencing homelessness by:

-- ensuring that service providers lead the Street Engagement Strategy and that people are offered interim or permanent housing services, treatment programs or other available interventions;

-- deploying available alternative-to-policing models, including interventionists and experts in conflict resolution; and

-- limiting law enforcement engagement to only where there is criminal behavior or activity and circumstances with a serious threat to public health or safety.

Several people called into the City Council meeting to voice support and opposition for the ordinance.  Zachary Warma, legislative affairs manager for the Downtown Women's Center, said "Implementing restrictions without first providing clarity as to how we are engaging unhoused residents and where they can ultimately go increases the odds of displacement, further traumatization, while putting housing and personal stability out of reach.'' 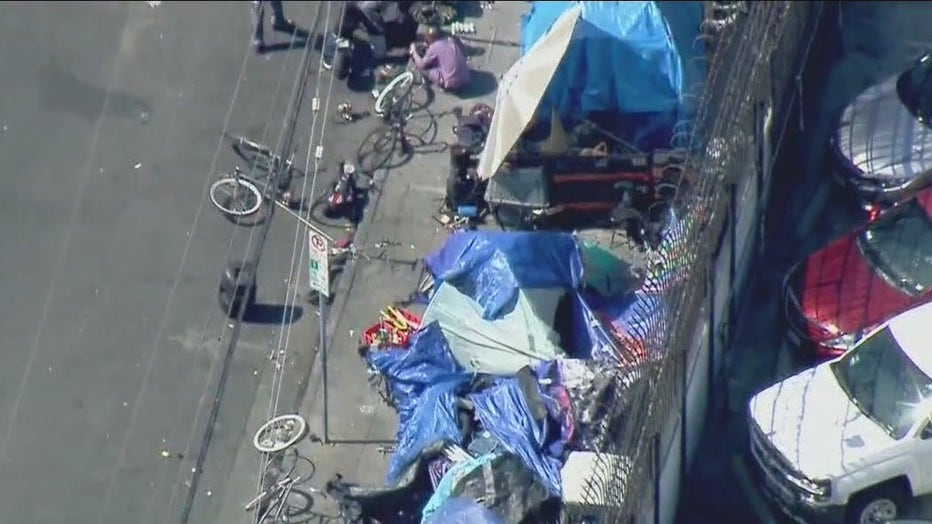 He asked the City Council to amend the ordinance to be contingent on developing "a robust street engagement strategy.'' The Services Not Sweeps Coalition held a rally outside City Hall to
oppose the ordinance.

"We reject this motion and demand that all processes involved in propelling it forward be halted immediately. We demand that the City Council and Mayor's office instead invest their time and legislative power into programs that provide a healthy and safe living environment for our unhoused communities while they are on the streets, and focus on providing transitional/permanent housing opportunities that meet a high standard of living,'' the coalition said in a statement.

"When has criminalizing homelessness ever solved the problem?'' asked one woman who called in the City Council meeting and said she was at the rally outside City Hall.

Councilman Paul Krekorian, one of the leaders of the motion to request the ordinance, responded to people alleging that the ordinance would criminalize homelessness by saying:

"This ordinance first of all does not make homelessness illegal. It does not criminalize homelessness. It does not make any conduct that is fundamental to being human illegal. What it does do is it guarantees that we will reestablish passable sidewalks. It protects the users of our public infrastructure and the unhoused residents of our city from being put into positions of interaction with automobiles, around loading docks, driveways and so forth. It guarantees access to our fire hydrants, entrances to buildings.''

Officials said the homelessness crisis in Los Angeles is taking a toll on tourism.

Others called into the City Council meeting to voice support for the ordinance, saying the street encampments have become out of control. "It is unacceptable that city leaders allow such encampments so close to schools and other enriching locations in our city. The impression on young minds is lasting,'' one caller said.

Nicole Mihalka, chair of the Hollywood Chamber of Commerce, called into the City Council meeting to call the encampments "untenable'' for businesses and children, and asked the City Council to pass the ordinance and ensure strict enforcement.

Councilmen Mark Ridley-Thomas and Marqueece Harris-Dawson introduced an amendment, which was adopted, to request monthly reports from the police and fire departments, as well as the Bureau of Sanitation on race, gender, location and type of enforcement when any enforcement occurs in the city pursuant to the ordinance.

The motion to request the ordinance was introduced as a substitute motion to a stricter anti-camping draft ordinance that was stalled in the Homelessness and Poverty Committee since November. Councilman Joe Buscaino, who is running for mayor partly on an agenda to enforce the city's anti-camping laws, invoked a rarely used rule last Wednesday to have the council pull the draft ordinance from committee.

The city's current anti-camping ordinance, which has not been enforced during the COVID-19 pandemic, prohibits tents during daytime hours, from 6 a.m. to 9 p.m. On June 9, Buscaino requested that the council amend the mayor's Declaration of Local Emergency and resume enforcement of the current anti- camping ordinance.

The ordinance will be reviewed during City Council's next working week, which will likely be when it returns from recess on July 27.