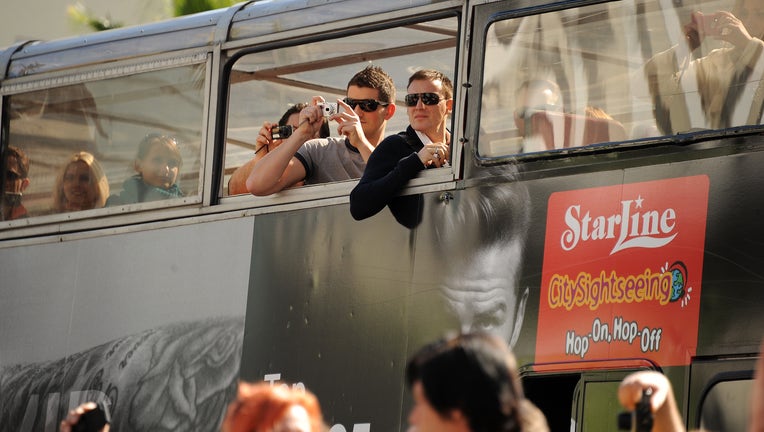 LOS ANGELES - The Los Angeles City Council voted Tuesday to give the city's Department of Transportation the authority to limit which streets tour bus companies can use on their routes.

Councilman David Ryu, whose district includes the Hollywood Hills, proposed the action, which was approved with no discussion.

Residents of hillside neighborhoods in the vicinity of the Hollywood sign and Hollywood Reservoir have spoken at council committee meetings of their frustration with tour buses that cause lengthy traffic delays, and sometimes block people on the narrow streets from getting out of their own driveways.

"Tourism has an important role in our city and our local economy, but public safety must come first,'' Ryu said when he filed the motion. "For far too long, certain tour bus operators have been putting the public and their passengers at risk by making unsafe turns, illegal U-turns, speeding, slowing or suddenly stopping while traveling on narrow hillside streets that were never built to accommodate them.''

Ryu said LADOT found that 200 tour buses traveled along some narrow hillside streets in a six-hour period during the "off-season.''

The city has marked certain streets where vehicles that weigh more than 6,500 pounds are not allowed to travel, but enforcing that weight rule against tour buses proved to be difficult, LADOT staff members said.

Councilman Joe Buscaino, who chairs the council's Trade, Travel and Tourism Committee, said last week that he recently talked with people about why they were visiting the city, and a majority said they came for Tinseltown.

"People want to see that Hollywood sign that they've seen on TV ... and they want to get as close to Hollywood as possible,'' he said. "It's important to strike that balance. It's also important for us to be responsive to Councilmember Ryu and the residents he serves.''

Buscaino recommended issuing warnings instead of citations to offenders for at least the first 30 days from when the law become effective.

LADOT will be in charge of establishing rules, policies and procedures to identify areas where public safety is an issue to limit or restrict tour buses.

"We also know that tourism ... is one of our most important industries and most important sources of tax revenue for this city,'' Buscaino said, "but we also need to be responsive to the residents that are being impacted, and I believe that we as a council and a city should do all we can to support the residents and this industry.''

Brian Gallagher, an LADOT principal engineer, said last week that the goal in prohibiting tour buses was to find a balance between safety and tourism, and noted that Hollywood Hills streets are narrow and that some tour companies sawed off the tops of their buses or altered them in other ways that made them unsafe.